I had fun and I learnt a lot with Coronavirus: when do we reach the bottom of the dip?

Does it make sense to have a new one, based on the current situation on the stock market?

maybe, it’s not a corona-dip any more surely.
But we need a “catchy” title, so what dip is it?

Cortanavirus: When do we reach the bottom of the dip?

Curious to see as well.

I wonder if it’s temporary or more sustainable decline. From 2008-9 onwards, we did not have a prolonged decline.

I think it would be healthy to have 1-2 years of decline so that valuations get back to a lower level.

I wrote in another post that -10% is quite common, -20% less. So this could be a way to enter. At the end you dont need to timely perfectly (also because it’s impossible). If you already get a -18% is good.

My recollection of 2000 crash is that non-profitable tech started selling off discretely at first so it looked like a dip. Doesn’t look at all dissimilar now.

On the other hand I wonder if there is an over reaction to inflation data, which many economists still predict will slow again by 2023

This is quite scary reading:

Waiting for the Last Dance

Apart from the conclusion that everything is about to crash, the recommendation is that US growth stocks should be avoided in favour of value & emerging.

I know I’m blind to a whole swat of other things going in the backgroung so I’ll propose a simple title:
“Everything bubble burst: are we there yet?”

If stocks keep going down next week, that’ll probably trigger some of my signals and I’ll end up selling some. If anyone considers selling, and provided they’re willing to live with a loss and quickly invest back if the timing proves to be wrong and markets rebounce (this is a critical condition), now is probably early enough not to make it too big a deal. For those who know/feel they’re going to end up selling, the start of a potential drop is a better spot to do so than lower down the slope, potentially close to the bottom.

I’d mainly take the time to assess my asset allocation in order to be able to ride the wave and not need selling at all during a potential big and prolonged dowturn with many false rebounces. Taking away the stress of trying to time the market during psychologically stressfull times is probably a good fundation for investing success.

We’re mainly unscathed now but if there’s a prolonged drop, the longer it will last, the more numerous and believable the rebounces during the fall, the more draining it will be on our morale. Many among us will feel the pain and want to act based on the gut reactions of a then troubled mind. I have no idea how I’ll react myself. I’d go through it with a plan (buying and holding is a plan) designed when I have clarity of mind and not act outside of this plan anytime I don’t have that peace and clarity of mind. Stay the course is a good mantra.

This is quite scary reading

Jeremy Grantham is a permabear, most of his writings are scary. You’d have missed most of the last bull market if you had acted on them. While I’m convinced there are powerful societal effects going on in the background, no one knows if and when they’ll get into real motion. Could be now, could be in 10 years, could be never.

I heard this recent bear market is a result of covid: broken supply chains, unlimited money printing, it had to end with inflation. When inflation in the USA exceeds 10%, there will be no other way to stop than to raise interest rates.

They say to stop inflation, you need to set the interest rates to 1.5x. Can you imagine 15% interest rates? This is what the market fears. If cost of capital goes up so much, it increases the discount rate and pushes the P/E ratio down.

Over the years we had an increase in money printing, but the velocity of money has been decreasing. If money starts flowing, prices will go up. 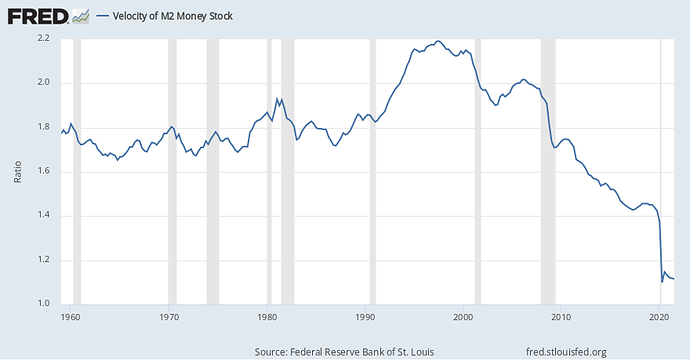 which many economists still predict will slow again by 2023

An economist is an expert who will know tomorrow why the things he predicted yesterday didn’t happen today.

Ignore the noise. Stay the course.

To answer the threads question: About 4-5 weeks after my bonus.

Jeremy Grantham is a permabear, most of his writings are scary. You’d have missed most of the last bull market if you had acted on them

Agree, but I think he will be right eventually, like a broken clock

This statement from him…

…and then separately stumbling on this chart in the FT was thought provoking. Are we already in the adjustment phase he predicts? Only time will tell I guess. 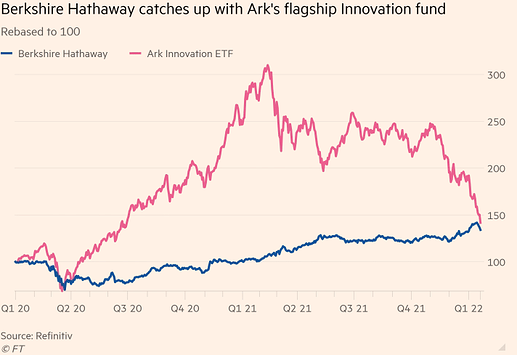 What to do? I am mostly invested in Quality stocks, many of which are also defined as Growth which Grantham says to avoid. I will hold the course since even if valued highly now if they maintain their current high Return on Capital the maths says they are still good value in the long term.

I have mostly avoided “speculative growth” like Ark and also crypto.

We could indeed be there, it feels like it, but I also felt like Evergrande was the real deal in September-October and then the makets rebounced. We may still be in the same market event, though, so I’m wondering:

In September or November, when we have had potential starts of drops too, we didn’t see the reactions we see here, like this thread, or reactions in the Free Fall thread on Bogleheads (not linking it because it’s not the thread to follow to get peace of mind during a market downturn). What has changed? What makes retail investors think that this time, it is it and it wasn’t in September, and it wasn’t in November?

when we have had potential starts of drops too, we didn’t see the reactions we see here

Aren’t we always seeing trouble where there isn’t any? That’s how we humans are wired by Nature: Missed out on one chance to get food and we’d find some later. But overlooked a deadly threat and we would have been eaten by some beast.

Who knows? The world is too complicated to be understood fully. Add that market participants aren’t fully rational and that makes the world even more inexplicable.

I can recommend reading 1913 by Florian Ilies: They were <12 months before a world war and nobody saw it coming.

What makes retail investors think that this time, it is it and it wasn’t in September

S&P500 is still at or above September level

When inflation in the USA exceeds 10%, there will be no other way to stop than to raise interest rates.

They say to stop inflation, you need to set the interest rates to 1.5x. Can you imagine 15% interest rates? This is what the market fears

Some say they can’t - and IMO they won’t - set the interest rates high enough to “stop inflation”.
Because even for and in the U.S. the question would pop out whether they’re able to service their debt.

I am mostly invested in Quality stocks, many of which are also defined as Growth which Grantham says to avoid
(…)
I have mostly avoided “speculative growth” like Ark and also crypto.

For me, it’s less about growth but more about profitability. Even a low-growth cigarette manufacturer or medical device company may be a solid investment (provided the margins and market standing are right).

I can recommend reading 1913 by Florian Ilies: They were <12 months before a world war and nobody saw it coming.

Sure, most don’t want it to happen. The problem is, the cost of capital is a key component of the economy, and it’s best to be set by the market. Instead, it is set by the central bank, which is prone to set it too low. This distorts the efficient allocation of capital and asset valuation.

This is my take.

We are in here for the long term. We know there will be bear markets.

We would do ourselves a disservice if we focused too much on the negative things that could or will happen because it makes us nervous and some of us might be tempted to sell.

I think it would be great to focus our minds on the recovery that will follow the downturn in order to keep a positive mood, and I can see a lot of positive value that we could bring to each other if we could encourage each other on this forum and mutually support each other to stay the course and keep rebalancing all the way down and up.

I would welcome a bear market because I plan to FIRE in the next few years and I would hate to do that at the end of a long bull ride.

I thought it was the right time to do some buying