Good point. Obviously, it would be best if it was already 2032, EVs were everywhere and you could buy a used Tesla for cheap.

I think if you do 36’000 km per year, an EV will pay itself off. Save on gas, service, in the end the extra cost won’t be that much higher.

Buying an EV is also fighting Russia with your wallet.

Buying an EV is also fighting Russia with your wallet.

Not that black & white, plenty of nickel (and aluminium) comes from there.

True madness, these prices. I’m still on the sidelines, I absolutely want a Berlin-made car. I wonder if the prices ever start decreasing again. Inflation + Demand are strong.

I absolutely want a Berlin-made car.

As far as I know they want to use Berlin for the Y and Shanghai for the 3.

Any reason why you want to avoid the Shanghai car? Seems to be of much better quality than those from the US.

Nah, they will also make a model 3 line in Berlin, but at a later point.

I actually drive a model 3 from Fremont and drove a Y from Shanghai, and I had a feeling the 3 was better quality. The steering wheel had this leather feel (and not matte plastic) and the Y had some squeaky noise.

Why I want a car from Berlin? Originally I thought that once these cars are produced here, with no need to ship them from China, they might become cheaper. But now even if this will be the case, the effect will be offset by inflation and latest price hikes.

Apart from that, it’s about the technology. I want the front/rear casting and the 4680 battery. Still not clear how much it improves the range or handling, but I just want the latest tech.

Finally, it’s politics. China is like Russia. I don’t want to support China.

but I just want the latest tech.

Well, me too of course. But the tech will always improve, at some point you have to pull the trigger.

I think it was the right call for us to order the Tesla 3. Our Polo is slowly falling apart.

The steering wheel had this leather feel (and not matte plastic)

I think Tesla also switched from real to synthetic leather at some point in the last years. Elon claims the synthetic one is much better tho. Can’t judge, my 2015 Model S has afaik still real leather.

I don’t want to support China.

Ouch, I hope you don’t use any electronics then xD

Hello Tesla investors,
how things are going today? I’ve read that the “Twitter” idea was a bit of a disaster for Tesla’s stock (and for the stock market overall, apparently ??)

Rejoicing in the pains of others hurts your own Karma.

You misread my post.
I’m really interested. I have no idea how much it dropped and if temporary.

First there were the Q1 2022 earnings, which have beaten the expectations. The quarterly EPS is already $3.22, which means if you’d annualize it, it’s already at $12.88. This sent the stock price +10% overnight. But over the course of next 3 days, almost all of these gains were lost. And then finally yesterday the stock dropped 12% from $1000 to $876. this puts the P/E at 68, which is IMO quite low for a company which has invested a lot of money in two big factories which still haven’t produced anything. You can expect even better results in Q3 and Q4. Q2 will be difficult due to the totalitarian Chinese state introducing brutal lockdowns on their population in Shanghai. Tesla factory was closed for a month.

There is never a boring day with Elon. I don’t know why the stock dropped. I see three potential reasons:

As with everything, we will be wiser and things will become clearer with time. I would personally prefer if he didn’t get involved in Twitter, but maybe Elon will prove that he can handle yet another company and that he didn’t bite more than he can chew. 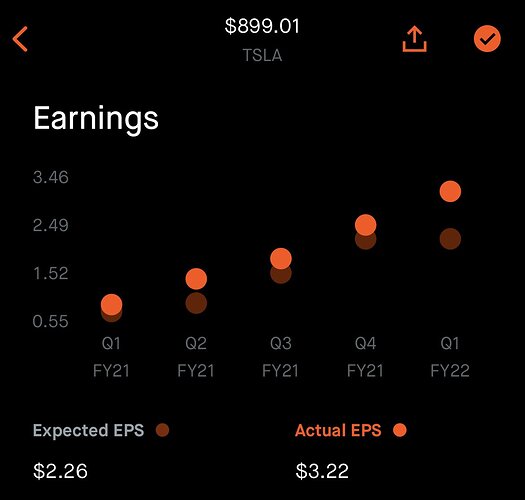 By the way, just with the current factories and models, Tesla can easily build 4 million cars per year, once ramped up (1 million for each factory). It is also well on the way to 40% gross margin and 25% operating margin. Let’s plug these numbers in to get the EPS:

I don’t think the supply chain could deliver for such numbers within the next 2-3 years.

Elon is on fire again….

Even in a bear market, the stock market likes to make jokes…
Since April Fool’s day, the stock is down exactly $420.69 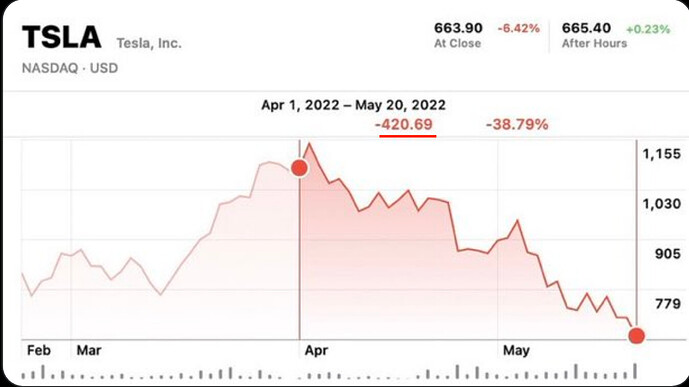 Whats special about this number?

Teenagers (and Elon Musk) find them funny (420 is a cannabis reference).