Well, seems like Tesla is rethinking Bitcoin. Apparently its energy consumption went up in the recent months by a lot. I also don’t think it’s sustainable for people to earn money by keeping their PCs on 24/7, it’s honestly absurd. I hope Proof of Stake wins. 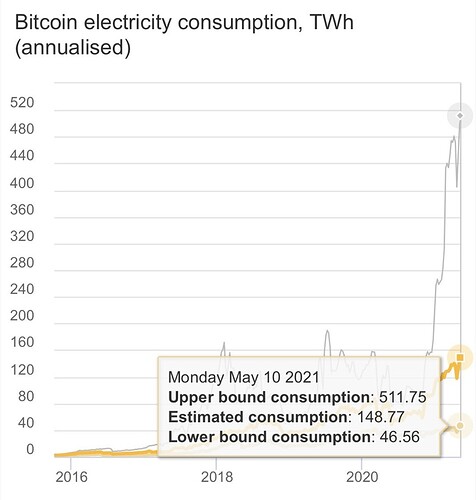 Because you not know how BTC are mined.
BTC = professional mining no one use that at home at standard kwh price !

Professional use cheapest electricity due to overproduction because go in country without a lot of people using electricity actually so not used by anyone and sell at really low rate like 0.01$/kwh if not sell at this price this energy is just lost.
It’s the only way for win money with costly ASIC even when BTC isn’t overevalued and return to lower price. Miner are there for long time and refuse to use coal because know that price will increase in a near future. So all theories about BTC are just wrong. BTC help to consume cheapest energy where is just lost without them. Help too new electrified country to win some money during the transition. Elon know that but just not want lost money by selling car with a BTC who is shorted so write that. Elon is a scam and a lot will lost all their money invested really bad from him. 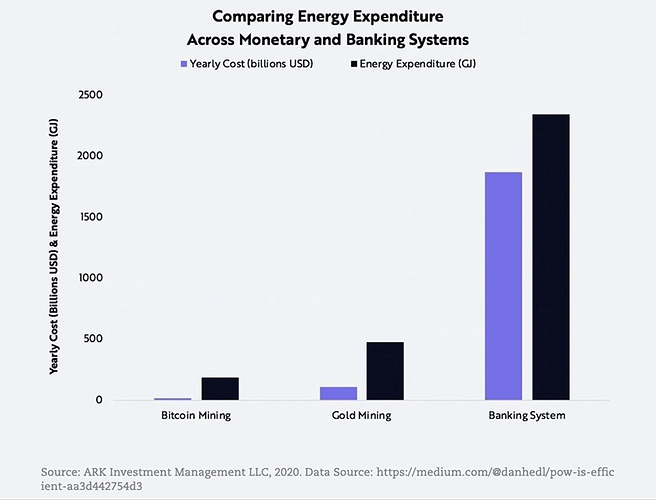 It would be interesting to find out whether a private miner (not a business) could deduct the cost of electricity from the income generated by mining. I can’t find anything clear on that, so I assume that would only work for a business.

Miner are there for long time and refuse to use coal because know that price will increase in a near future. So all theories about BTC are just wrong. BTC help to consume cheapest energy where is just lost without them.

Would be nice to have some reference about that. Most miners are in China where electricity is CO2 heavy. 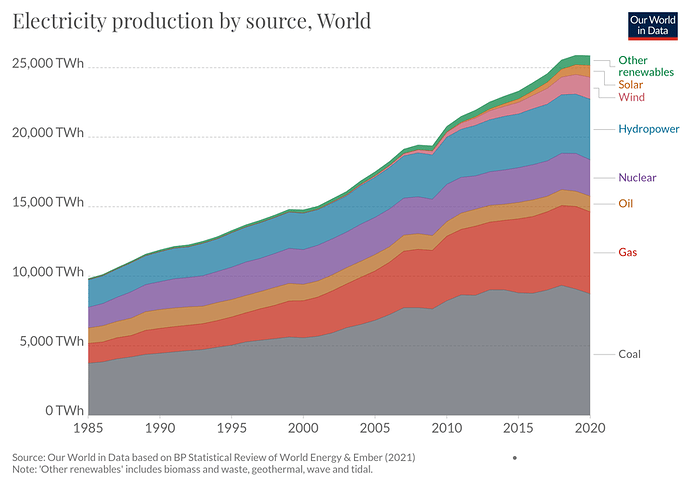 An interactive visualization from Our World in Data.

It would be interesting to find out whether a private miner (not a business) could deduct the cost of electricity from the income generated by mining. I can’t find anything clear on that, so I assume that would only work for a business.

At least in Zurich this is the case, see Steuerliche Behandlung von Kryptowährungen (Bitcoin etc.) | Kanton Zürich
Basically it’s counted as “selbstständige Erwerbstätigkeit” and therefore you can/have to list income/expenses for this. Electricity is considered expenses.

China change coal by nuclear (green) power. It’s due to price increase kwh price and miner will move.
Miner search green and unused cheapest power possible. Like use refinery methane actually burned for nothing but use this methane for produce power instead whatever the refinery is located.
BTC have huge price now it’s not an issue but when cost 3k/btc miner can’t sustain a huge kwh price and move.

Here, I corrected that for you:
Miners seek the cheapest electricity possible.

Stop bullshitting people they’d be seeking “green” power. If they were only remotely prioritising their environmental concerns or green considerations over their purely monetary business interests, they’d not be in the Bitcoin mining business in the first place.

If anything, crypto mining is just replacing out industrial and household demand at lower price points, thus increasing overall consumption. Even if renewables had lower costs than fossil fuels in electricity generation, mining just incentivises generation with non-renewables.

Miner are there for long time and refuse to use coal because know that price will increase in a near future.

Yeah, so much that more than a third of China’s crypto mining is estimated to be taking in Xinjiang province. And floodings of coal plants there end up taking out a huge chunk of global mining power.

And who hasn’t heard about how green and renewable electricity production is in other top mining countries, such as Russia, Kazakhstan, Malaysia or Iran?!

Argo Blockchain has purchased two hydro-powered data centers, allowing it mine bitcoin in a more sustainable and green way.

For context, this is in reaction to Private-equity firm revives zombie fossil-fuel power plant to mine bitcoin | Ars Technica

May be some use coal but it’s not the majority of miners and probably the most stupid miners.
Coal, Oil even uranium price increase day after day. Coal miner will shutdown mining and resell their ASIC to other green miner who can keep a low priced energy. Refinery methane isn’t green power but it’s better than partially burn this methane for nothing because refinery not need this power but miner yes.
Just stop to write bitcoin isn’t green or clean is just wrong. If we replace worthless fiat by BTC we can shutdown a lot of power plant resell building for other usage.

If we replace worthless fiat by BTC we can shutdown a lot of power plant resell building for other usage.

What? The current system is order of magnitude more energy efficient… How much transactions does bitcoin process vs. the payment and banking systems? (and the current financial system provides a lot more services than bitcoin does).

(the graph you had above compares apples to oranges, it’s basically the costs of retail branches and atms… for comparison it should compare visa + bank clearing since that’s most of the thing BTC can currently replicate)

May be some use coal but it’s not the majority of miners and probably the most stupid miners.

About half, probably a bit more of the world’s most of the world’s hashing capacity is in China.
A country that generates two thirds of its electricity from coal. In doing so, “China accounted for over half of all coal-powered electricity generation in the world”. And Bitcoin has been highest in provinces with cheap coal (and labour).

In China, they do shutdown because the government is taking active steps at curbing usage for crypto mining purposes.

A simple look at where most of it is mined makes it obvious it isn’t very green or clean.
So no, I won’t, until someone presents solid arguments and/r evidence that’s relevant today.

Anecdotal press clippings about company XY or gas flaring aren’t. Neither are the fairy tales about the future that ARK and other crypto Kool-Aid drinkers keep on fantasising about.

Yeah, these comparisons between crypto and banking system are suspicious. It’s hard to tell, what should be counted: front office, back office, banknote printing & distribution, payment terminals, ATMs? If there is only crypto, won’t we need credit cards, mortgage loans, collaterals, appraisals, safe deposit boxes etc?

The lack of efficiency could be fixed by writing better code, though. ETH 2.0 aims to solve this with sharding and what not. 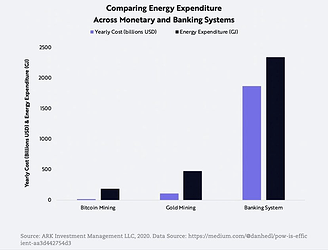 That graph is from an article on ARK’s web site. Their in-house “cryptoasset analyst” (whose Twitter ramblings we’ve had the pleasure with before) probably did a quick Google, took the first and most convenient table he could find and called it a day.

Because… let’s look at the “data source” they provide: Some guy’s blog post (well, ok, seems to be director of growth marketing at Kraken) on Medium. Indeed, the numbers seem to have been pulled directly from the table provided there: 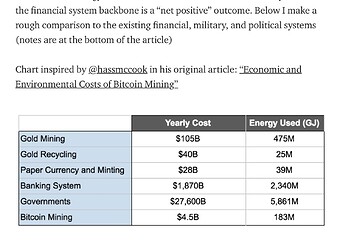 And… that’s it, basically. There’s no details given, the figures are based on other research that’s only very briefly mentioned and linked to in the notes. ARK couldn’t even be arsed to quote the original “research” as the data source. Not that I am surprised.

So what underlying research is referenced in the notes then, as source for the energy consumption of the banking system? No problem, I’ll directly provide you link to the “initial research” here (page 20-22), provided by Hass McCook, self-proclaimed “Bitcoin Evangelist”

And indeed, entering his numbers into the online calculator, I am ending up with very similar figures for carbon footprint of approximately or slightly below 400 million tonnes of CO2.

Now, here’s where it gets “funny” though: 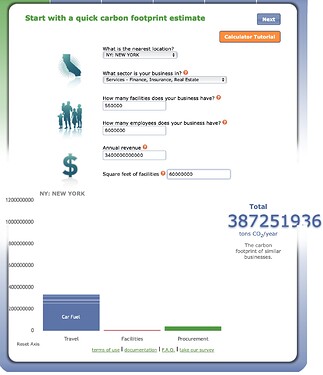 And now the hashrate of China has fallen so less and less coal used until China go to Nuclear if they rectors not explode before…
Blockchain is a better system than banking system even if I never buy any bitcoin.

Next years will show us the future of money if banks and/or some country collapse due to huge amount of debts.