This is my Finpension allocation trying to recreate VT. Do you think theres a better/smarter way to do this? 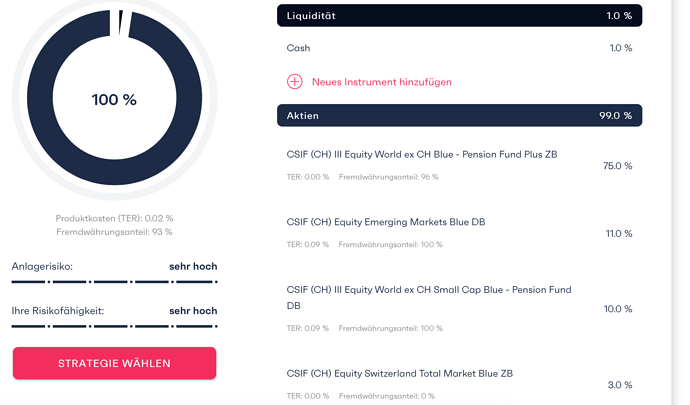 No, that’s exactly how I would do it.

I only split CH into Large + Small/Mid cap (2+1),
And chose Quality vs “regular” fund for World ex CH.

Do you think theres a better/smarter way to do this?

Realising that it’s a pointless exercise for investment purposes.

3% allocation for Switzerland will not make any meaningful difference over the long-term. And that fund is highly concentrated on its top three holdings: about 45% is Nestlé, Roche, Novartis alone. Stocks that will probably be overrepresented in your 2nd pillar pension fund anyway. The correlation of MSCI Switzerland with MSCI World has been so great for decades, that one will be ahead a few percentage points at times and the other at others. Over the long-term, the difference has been and likely will be merely statistical noise.

The same is, broadly, true for your 10% small cap exposure. Small cap indices move in sync with mid- and large-cap indices. A small “small cap premium” is often observable - but if you believe in that, why not not capitalise on it by making a (modest) bet on it and allocate 25% or 30% to it? It will also serve to increase your portfolio’s diversification, which is generally good. At least in stocks, though probably not (but rather to the contrary) geographically. At 10%, it will only make a negligible difference.

Now, for emerging markets, things are slightly different. They aren’t as heavily correlated to major large-/mid cap world indices. For instance, MSCI Emerging Markets has returned about 0% year-to-date (end of october actually), while MSCI World is up about 19%. That’s a huge difference - but again, a small one for your portfolio overall, and EM seem to be capable of considerably outperforming the developed work over short periods - but not over the long term. Still, if you believe in some sort of reversal to the mean, why not bet on it?

In the end, you could go just as well with 99% (CH) III Equity World ex CH Blue and be done with. Nobody would be able to predict whether you’ll be ahead or behind compared to your proposed allocation in 1, 5, 10 or 20 years of time. The difference will likely be minuscule.

Thats the one with 0.13% TER and somewhere around 75% USA and mostly tech, right?

Whats your reasoning behind that?

I just tried to go with the current market cap for my 3a. Maybe 3% Switzerland and 10% smallcap wont make a big difference, but they wont make it worse, right?

I have a 50% smallcap value tilt in my taxable portfolio

but they wont make it worse, right?

Most probably it won’t - and I think you’re well on track with your proposed allocation.

In the end, you should absolutely go with what you feel comfortable with.

And I’ll readily admit to overoptimising part of my own portfolio (though not my finpension account) in a similar vein.

This is my first post and I am an absolute newbie, so bear with me…

Just out of curiosity, why would you opt for Equity World ex CH Quality instead of Blue? What I have read is that you should keep TER as low as possible, because it is one of the drivers that eats away on your returns. Thus, wouldn’t Blue be better as its TER is at 0%? Or is 0.13% negligible? Or is it somewhat safe to assume, that quality equities will outperform just large- & mid-cap companies?

In the OP i used the normal blue fund, not the quality one.

Or is it somewhat safe to assume, that quality equities will outperform just large- & mid-cap companies?

It is at least plausible, considering that MSCI Quality has quite consistently outperformed MSCI World.

I am sorry, I didn’t mean in the OP, but @dbu s response to your post.

Or are you assuming that this is only happening on a rare occasion and therefore can be neglected?

Finpension rebalances themselves every week to your desired allocation. You dont need to do anything.

In a market capitalization-weighted portfolio I don‘t want rebalancing to take place.

For example:
Let‘s say emerging markets grow faster than the other countries and has now grown to 13% from the initial 11% in your starting allocation. This should not trigger a rebalancing. If you‘d now calculate the weights again, you‘d end up with the new numbers.

I recently asked Finpension if they will offer an option to disable automated rebalancing in the future. Luckily they are indeed working on this. But I wonder what you guys are doing in the meantime.

Can just readjust the weight once a year, does backtesting make a meaningful difference vs anything more “correct”?

I recently asked Finpension if they will offer an option to disable automated rebalancing in the future. Luckily they are indeed working on this. But I wonder what you guys are doing in the meantime.

I recalculate the percentages once a year or so and will probably check it after a big market move. I don’t think any more than that would make a significant difference.

I’m at Viac, which rebalances automatically only when a fund or asset class deviates at least 2 percentage points from the target (and after deposit or strategy changes). This already reduces the frequency of rebalancing. Finpension is a bit more aggressive as it already rebalances at a single percentage point deviation.

Now i understand what you mean. I honestly never thought about that.

Yes, your best bet would be to rebalance yourself every 3 to 6 months to the current world caps. Honestly it probably doesnt really matter.

Another alternative would be to to rebalance monthly to new world cap, because i invest cash monthly anyway.

You could also just take the world index, if you dont care about Emerging Markets. That way youd only hold one index and wouldnt ever need to worry about rebalancing.

Thank you for your comments and suggestions! I did not back-track it yet to see how often this would happen and how it would impact the performance.

I‘ll probably also stick with recalculating yearly or so.

If you could disable rebalancing, you could recreate VT once and leave it like that forever.

How would you handle dividends?