It always irritates me how people measure the wealth of billionaires with their own mindset. “$100 billion? You can’t spend that! He has too much! How many people could have a nice life with this money… We should do something about it!”. Or they count how many houses and yachts they can afford.

I see a few problems with this kind of thinking:

This topic then is directly connected to the Universal Basic Income theory. If you give every person X CHF per month/year how do you know they won’t spend it on some dumb thing? You can start giving food money (aka food stamps) that they can use only to buy food. And for rent? Maybe government buildings? We slide back east if we follow this path…

In ma0’s defence, he could argue that he thought it was the German “Billion”*, where 800 Billionen / 330 Millionen is indeed 2.4 Millionen.

We may need to brush up on these “semantics”, because once hyper-inflation hits us, we’ll be using daily. How many billions for that pumpkin? Hello, do you mean the US billion or the German Billion? 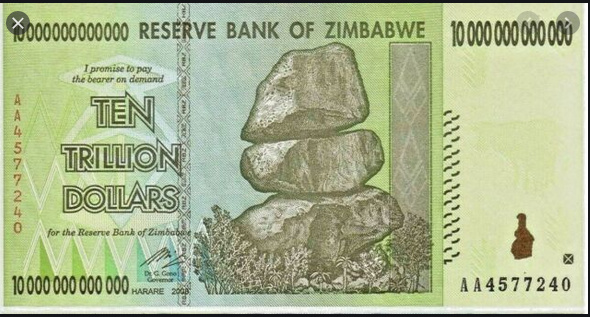 Given that 2/3 of the world population lives with less than 10 USD a day and 10% earn less than 1.9 USD a day, 1000 USD would make a big difference in the lives of those random 100 million people. I seriously doubt Musk would do more good if he had the whole pot.

So those 800 million with less than 1.9$/day would consume that money within a couple of months. Then what?

You know the saying about teaching someone to fish.

it was the German “Billion”

There is even a big wikipedia article on this. Personally, I’m a fan of the short scale, but in Polish we also have milion, miliard, bilion, biliard. Confusing!

Btw even Google is struggling… 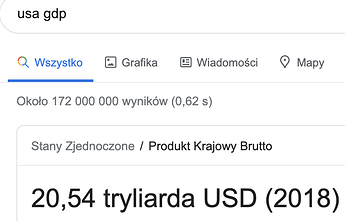 I was thinking more about random Americans. If you gave all Nigerians/Somalis/Congolese each $1000, this would end up in big inflation in their countries. You can’t compare 10 USD in USA with 10 USD in Africa. Giving someone $1000 increases his purchasing power relative to the people around him. Giving everybody $1000 would have them fighting for limited consumer goods. Maybe you would see a short-lived spike in imports. But yeah, dream on your socialist dream, dude!

So those 800 million with less than 1.9$/day would consume that money within a couple of months. Then what?

They would consume them in a couple of months because they have pressing needs to be met. I can’t believe there can even be a discussion whether it is better to help the poor or give the money to Elon Musk, who is, like us, just lucky to be born in the right place.

I was thinking more about random Americans.

Right, that makes your statement a little less painful to read for my socialist dude’s eyes.

I can’t believe there can even be a discussion

Because you frame it wrong. It’s not about giving a rich Elon Musk some more billions to buy yachts and mansions. I just have trust in him putting this money to better use.

Imagine a village where the most valuable thing is a tractor, which belongs to the village leader and helps with cultivating land. One day a traveller comes by and he offers each villager $1000 if he can take the tractor.

Billionaires are people who usually only spend a small chunk of their wealth on consumption, the rest is invested in factories and research. Liquidating and consuming their wealth is the dumbest thing you can do, if you look for long-term effects. I’d rather Elon Musk have $100 billion at disposal than a 100 milion random people each a $1000.

The other lens through which to analysis this is the “decision power” or the “power balance”. If we accept such high net worth in our society based on the fact that they can do much good by spending it efficiently, isn’t it anti democratic?
If I understand you correctly, you say that most billionaire shall have much more decision power than millions of people because they are smarter? But what are the checks and balances to restrict “bad billionaires”?
For one Musk billionaire, how many Koch is there?

One example I like is the tax deduction of the hundreds of millions given to repair the burnt cathedral in Paris. If you take someone who gives 100 millions with a tax bracket of 20%, you basically allow him to redirect 20 millions of taxes to something he likes. Shall an non-elected person have so much power?

I believe we should remove barriers for poor people to get rich. Many barriers exist to cement the position of big corporations or certain groups of interest. You want to do business, you need to get a license, have all the papers in check, adhere to all regulations. It’s much easier to do (or it’s only worth the trouble) if you’re big already.

So I believe that you should reduce inequality by removing hurdles for the little guy, not by taxing/fighting the big guy. If you dissolve a monopoly by force, then you fight the effect, not the cause (what allowed to form a monopoly and prevented smaller companies from being able to fight).

Yes, I am very much afraid of big corporations having too much power, but I don’t think you will make the World a better place if you simply consume the capital that we have accumulated over generations.

Before the 1st world war, the only way to have good life for a lady was to marry someone who had family capital. Even marrying a doctor or a lawyer brought you just outside of poverty. ( The book Pride and Prejudice picture pictures this nicely).

With human being what we are, do you see any way to reduce inequality without limiting the wealth accumulation past a few 10 millions per person?

It’s a myth. The richest people keep constantly changing over generations. I think there was one nice case of Vanderbilt, who made sure his billions were preserved nicely within the family. The family keeps meeting every year. Today, there is not even one millionaire left among them. The ability to accumulate capital is not hereditary. People spend money or make bad investment decisions. It’s a competitive World.

You seem to think that it is always the same people who are benefitting from this capital, i.e once someone is in the top 1% wealthiest people, he will stay there (that was as well the thesis of Piketty).

The flaw here is that in many countries, the top 1% is a dynamic place, i.e you have often no guarantee to stay there. This kind of wealth usually happens if you provide a massive added value to society.
It is true in United States, it is less true in many European countries.

Consider that about ten percent of Americans will spend at least a year in the top one percent and more than half of all Americans will spent a year in the top ten percent[1]. This is visibly not the same for the more static –but nominally more equal –Europe. For instance, only ten percent of the wealthiest five hundred American people or dynasties were so thirty years ago; more than sixty percent of those on the French list were heirs and a third of the richest Europeans were the richest centuries ago. In Florence, it was just revealed that things are really even worse: the same handful of families have kept the wealth for five centuries.

Now i find it funny that the most “static” countries are those where there is supposed to be the most redistribution. I guess a strong State is firstly a way of making sure that part of the redistribution lands in the “right pockets”…

I believe we should remove barriers for poor people to get rich.

So I believe that you should reduce inequality by removing hurdles for the little guy, not by taxing/fighting the big guy.

I believe the great majority of rich people could become rich, if not by inheritance, because of the favourable conditions in which they were born: right country, right region, right family.

Let’s focus on one country alone, how can you try and reduce the inequality of “starting positions” without taxing the rich and using those money to make sure also the poor can have access to quality education, health care, etc?

It’s a myth. The richest people keep constantly changing over generations. I think there was one nice case of Vanderbilt, who made sure his billions were preserved nicely within the family. The family keeps meeting every year. Today, there is not even one millionaire left among them. The ability to accumulate capital is not hereditary. People spend money or make bad investment decisions. It’s a competitive World.

Also, the Vanderbilt family is probably a poor example. Many of the offspring of Vanderbilt actually ended up very well-off. Just read their wikipedia article.

The Vanderbilt family is an American family of Dutch origin who gained prominence during the Gilded Age. Their success began with the shipping and railroad empires of Cornelius Vanderbilt, and the family expanded into various other areas of industry and philanthropy. Cornelius Vanderbilt's descendants went on to build grand mansions on Fifth Avenue in New York City; luxurious "summer cottages" in Newport, Rhode Island; the palatial Biltmore House in Asheville, North Carolina; and various other op...

You can inherit little and still benefit from your parents relative wealth and status.
(E.g. Gates, Buffet or Zuckerberg)

You can belief that billionaires have mostly earned every penny they have and still be in favor of more redistribution of wealth.

Now i find it funny that the most “static” countries are those where there is supposed to be the most redistribution.

I got reminded of this comic strip 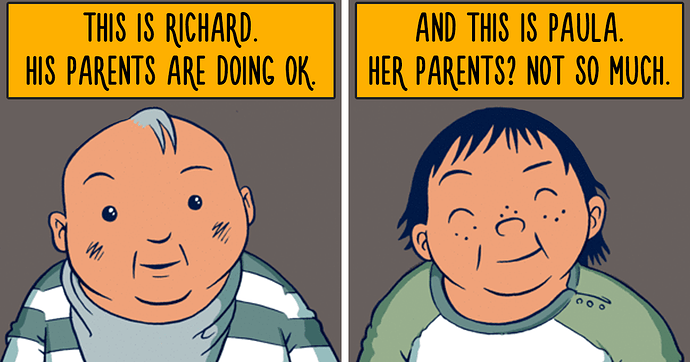 This Simple Comic Perfectly Explains Privilege, And Everyone Must Read It

Auckland-based illustrator Toby Morris perfectly summarizes what it means to be privileged with this thought-provoking comic strip. When we say privileged, we're not talking about those people who were born into royalty, or those with millionaire...

You misunderstood what Taleb says. The quote you are referring to is “This is visibly not the same for the more static –but nominally more equal –Europe.”

The “nominally” is here for a reason: Taleb means that european countries call themselves more equal, but aren’t. Otherwise, he would not continue by saying that :
The way to make society more equal is by forcing (through skin in the game) the rich to be subjected to the risk of exiting from the one percent