Why would an interest increase of 3% jeopardize so many real estate loans?

The 20% equity isn’t something that’s required by law, it’s just “best practice” among banks. The chances of them liquidating your house when you have a safe job and always pay on time aren’t that high imho, even within a crash.

There is no “margin call” mechanic going on here. banks won’t just scare away customers that easily.

As a recent buyer, this is super scary…

as a recent buyer, you probably have about 10 yrs of never-seen-super-low interests that you can enjoy.

a) prices increased c. 10% in our region since we bought
b) We bought 130k below the max. market value the bank was willing to finance
c) we invested (or spent, who knows…) 200-250k in equity

Or am I missing something? My thought was that
a) we won’t pop-up in a stress test and
b) the amortisation part is already done when renewing the mortgage in 8 years

That’s the deal. At renewal time, this is where you need to have enough bargaining power (i.e. cash at hand). Until then, if you keep paying, I guess noone’s gonna bat an eye on the contract.

as a recent buyer, you probably have about 10 yrs of never-seen-super-low interests that you can enjoy.

I wish I had. I took a Saron when rates started to go up in spring because I expect our credit rating (“Tragbarkeit”) to improve in the next year, I so wanted to wait for that. Hindsight is 20/20.

so why are the RE prices not falling already?

I can wait another 1.5 years (naturalization).

I just wonder, what kind of correction do you expect? 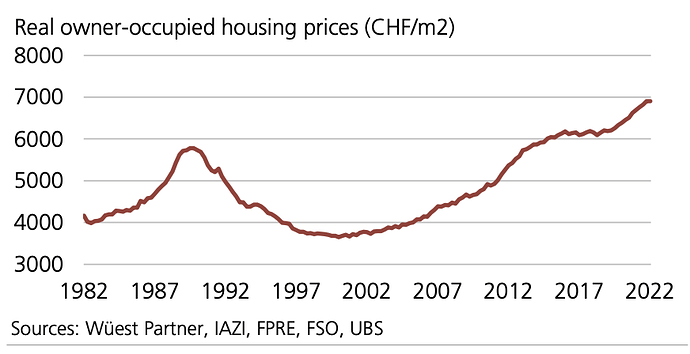 But applying this historical data to our current situation, if the dips start soon, how long it will take and what level do you expect it will reach? Do you think the prices can go down by 30%? Or just 10%? If 10%, then we’re just gonna go back less than 1 year, which would mean the wait was pointless.

And if we look at the total UBS bubble index, which includes other factors than just price, we can see that according to them we’re only in the “overpriced” range. 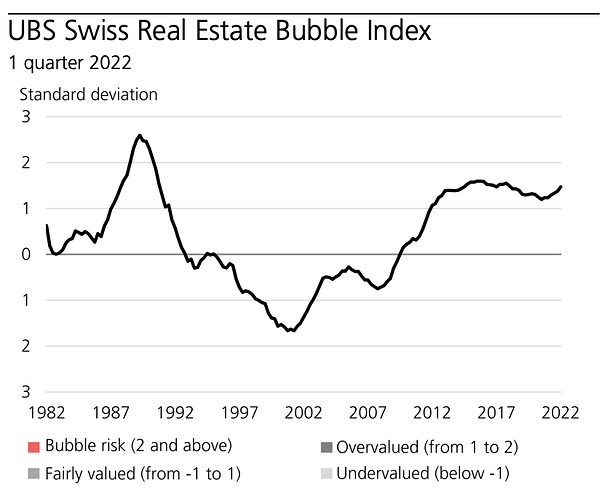 Don’t get me wrong, I’m super frustrated about not being able to afford real estate. Intuitively, it seems wrong that it costs so much that most people have to take huge loans to afford it. I’m just not too optimistic about the price drops or the speed at which it could happen. We would need to see some major shitshow of unforeseen scale in order to witness a crash in prices by 50% or more. And honestly, only then could I afford any of the Swiss real estate with clear conscience. Otherwise it just seems like a leveraged bet on the prosperity of the country for the next 30+ years.

As with everything in CH

probably depends a lot on the canton.
In and around ZH we might not see any significant drops.
But elsewhere it might have already started to happen (I overheard some people chatting about Davos and such - probably also not low demand area, but apparently feeling it).

In and around ZH we might not see any significant drops.

I think that’s exactly where you’ll see the biggest drops.

In and around ZH we might not see any significant drops. 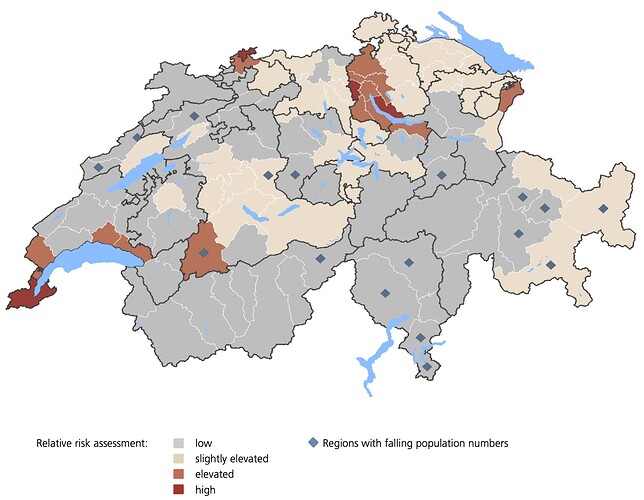 Interesting, so they reason that something else than basic supply-demand view is at play?
Do you know what?

I know that those are the areas where prices are most inflated though, so might be at risk of bursting the most, true.

And if we look at the total UBS bubble index, which includes other factors than just price, we can see that according to them we’re only in the “overpriced” range.

It is helpful to look at the data underlying the UBS bubble index, which is a made up composite

The 3 charts below support the view that things took off with introduction of low / negative interest rate circa 2009.

Even if the population and demand keep growing, at a certain point the current prices just stop being affordable.

Example: our friends nearly pulled out of a 2M purchase when the 10 year rate went to 1.2% as it blew their monthly budget. They would never have bought at 3% (interest cost on 80% loan becomes 4k /month instead of 1.6k) 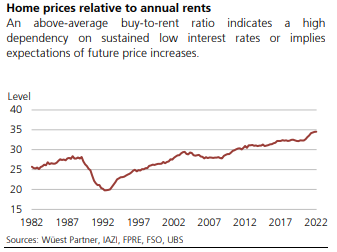 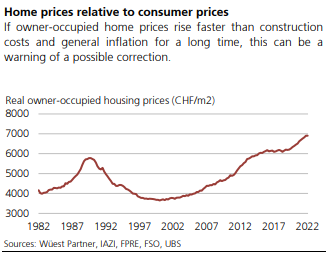 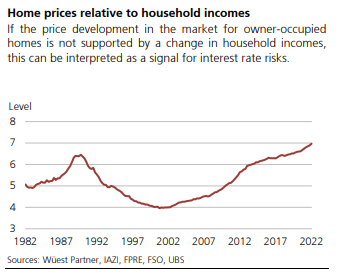 Do you know what?

The regional analysis is based on how the local price-to-rent ratio has changed over the past five years. Regions where this ratio experienced a disproportionately sharp rise have an increased correction risk.

I guess then realty prices went up more than rents. Although whenever I look for some attractive flats to rent, I tend to find places which cost 4’000 CHF or more. So not sure about rents being in check. Maybe for the low standard flats. But the attractive ones are in high demand, I guess.

I think prices in Lugano are in the same bubble as those in Zurich.
I wonder if they decided to work on such a large scale that they “didn’t bother” to show small dots of red here and there.

Or something more malicious. It reminds me the website of a health insurance that conveniently skip Ticino as a non-risk region, only on the italian version of that page. Coincidence?

edit: sorry, half off topic

I just wonder, what kind of correction do you expect?

On a long-term average, a yearly 2% appreciation would be in order. We are way above that currently.

Friends who bought something in Affoltern am Albis for 850 four years ago are now selling it for 1.1M. That’s just not reasonable. But I might just be wishful

Ah! And the skipped Zurich in the German part. Is Geneva in the French version?

I’ve read elsewhere that the danger zones started in ZH (because of the airport?)
So the italian version is the one wrong.

Wow that is a really nice return on investment ( which your house should not be viewed as), they lived there for a few years for free and made money. Incredible.

Those were good times from 2008 onwards

@Bojack you will buy something! The right thing will appear at some point in the future