What would you think about Gold as an alternative to Bonds?

Given the current situation with government bonds (low yield, risk of interest rate increases) I was wondering what you would say about a precious metal / gold ETF?

In my opinion they should be somehow inversely correlated to the equities: in a time of crisis precious metals tend to appreciate. Otherwise it represents some stable value.

I was looking for instance at this one: https://www.justetf.com/ch/etf-profile.html?assetClass=class-preciousMetals&groupField=none&sortField=ter&sortOrder=asc&from=search&isin=CH0106027128

I see a “relatively” low TER (considering it is also CHF hedged).

What do you guys think, could such an ETF be an alternative for diversification / risk mitigation in place of the traditional bonds?

I have a few percent of my portfolio in physical gold, silver, platinum and palladium. It’s physical because I have access to wholesale prices and I have a cheap place to store it. I generally treat it as bonds and cash (safe-heaven part) in my portfolio.

It seems that now silver, platinum and palladium are underpriced, so I think it’s a good moment to buy. The problem with this kind of investments is that they have no internal rate of return, and thus they are purely speculative, and thus market-timing plays important role.

In my opinion they should be somehow inversely correlated to the equities: in a time of crisis precious metals tend to appreciate. Otherwise it represents some stable value.

I think gold is uncorrelated to equities. Metals and REITs usually play a role of a hedge against inflation (check for example Harry Browne’s Permanent Portfolio. Some people (for example JL Collins) say that equities are good enough against inflation. Traditionally, gold couldn’t also be considered as good as bonds because it had lower risk-adjusted return (in fact both lower return and higher volatility). But I’m generally fan of diversifaction and I’m feeling better prepared for WW III with physical gold, so I still buy it.

if you ignore everything except the long tem returns, stay away from commodities. in other situaitions, just mix them in as a diversification. preferrably broadly diversified, not only gold

Gold are as volatile as stocks. You use bonds to lower volatility. So you cannot substitute gold for bonds, not for the traditional reason. Bonds are not chosen primarily for uncorrelation to stocks but to shift the portfolio risk / return curve. Gold doesn’t do the same.

I like to have a hedge in precious metals, holding gold is a good way to do that.

Physical gold or ETF with physical backing gives you about a beta of 1 on gold prices. If you want to hedge a larger portion without taking out too much cash I prefer the GDX ETF (VanEck Vectors Gold Miners ETF) which has a price sensibility of about 3x on the gold price. In other words, if you are looking to hedge a portfolio, you need three times less money if you hedge with GDX as opposed to Gold directly. A 5% portfolio exposure in GDX is hedging about the same way as 15% gold exposure. How well the hedge works of course depends on the constellation of your portfolio and its [hopefully negative] correlation to gold prices. GDX has about a beta of 3x on gold and is not leveraged. For crazy short term hedging you could try NUGT which is leveraged and works as 3x GDX or 9x Gold. However, do NOT hold NUGT for the long term as the rolling cost and the daily rebalancing will kill you.

Any other ideas of that kind around?

Love to explore this field!

That’s an interesting point. I don’t know however if leveraging that much isn’t going to be expensive and at the same time risky? I was looking for metals as a diversification.

GDX by itself is not leveraged at all, it just has a beta of 3 over gold. When you buy GDX you’ll own a piece of every large gold mining company that there is out there. As they are producing (mining) gold at a cost price of about USD 1,050-1,200 per ounce we are pretty much at the floor anyways. If gold drops below the production price, the mines simply close production and wait (GDX dropped to $12 two years ago) - while sitting on their gold reserves in the ground. If however gold prices surge, the profit margin for the miners will skyrocket and you - as shareholder and owner - will profit with a beta of 3x from this upside. Therefore, you can hedge any given portfolio with 3 times less cash/ money down by investing in GDX than in gold. NUGT is the one you got to be careful, as it’s 3x leveraged GDX. GDX itself can be a low cost buy and hold.

Any recommendation on GDX wrt exchange?

I see it is now listed on SWX too as well as NYSE, but there isn’t much liquidity on SWX. I was going to purchase on NYSE but wanted to check first if this was a stupid idea?

Hi Fletcher,
I usually buy it in USD from the NYSE, however, this might not be the most cost effective [fees] way to purchase. London market is a good alternative with liquidity in case NYSE trading is too expensive. Was not aware that it’s available on SWX as well. In case you go for low liquidity market option, always place fill-or-kill limit order instead of market order as market order might get executed only partially and/ or at very different price - e.g. you might move the market.
Cheers,
Matt

beware, a gold ETF hedged to CHF is expensive.
In theory such an ETF wants to reproduce, in CHF, the price of gold expressed in USD.
It works perfectly minus the cost of hedging.
The cost of hedging is not included in the TER but is given by the diferential of the libor rate of CHF and USD. Today it is 1.94+0.74=2.68%.
Assuming a TER of 0.3% you “loose” 3% of your gold each year.
If you buy a commodity why hedging? The commodity has a price in CHF anyway.
The only reason to hedge is when you think that the USD will take a nose dive shortly.
For the long run it is a looser strategy. 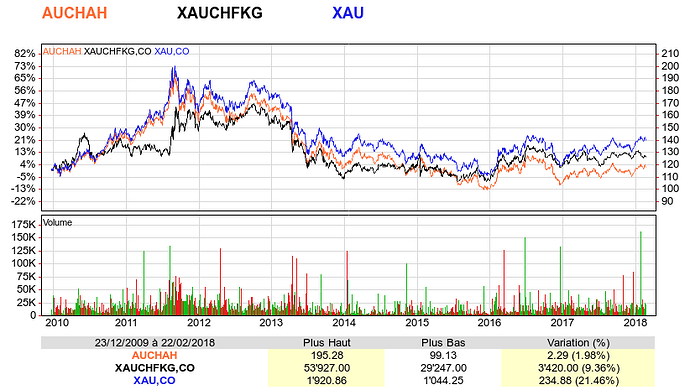 I am thinking about the following scenario: many people are now pointing at signs that there is going to be a devaluation of dollar and it’s replacement from being the world currency. If you look at the US public debt and the money printing activity I see it as very realistic.

I am thinking about the following scenario: many people are now pointing at signs that there is going to be a devaluation of dollar

You can find similar signs about other currencies including the swiss frank.

If you torture the data hard enough it will confess.

and it’s replacement from being the world currency

So, who’s replacing it according to your sources?

Why does it matter? You sell your metal ETF and buy immediately the currency you want with the proceeds, it all just takes a few seconds. Chances of getting hit by a car are higher than that everything’s going to crash in these split seconds

So, who’s replacing it according to your sources?

My primary source is the book of James Rickards, here’s the summary of it:

Concerning the Swiss franc I’m also getting my doubts of how stable it will be in the next crisis. As this guy is pointing out

it is the private debt that leads to the crisis, not the public debt (since the government can create more money to pay it out if the debt is in it’s own currency, but private people can’t). And Switzerland now is heading the list of countries with the highest private debt to GDP ratio:

So we are not that safe in Switzerland as one may think. I’m bringing all these things here in my search to the question I’m asking in a separate topic on this forum: how to prepare, survive and possibly profit from this coming crash?

I’m building a Swiss Golden Butterfly Portfolio. As regards to gold it will be 20% of my portfolio, about half of it in physical bullion and the other half in the most secure gold ETF, according to the Permanent Portfolio philosophy: ZGLD (ZKB Gold ETF). I was wandering if choosing the hedged version but reading some comments above, maybe not?

Beginner question: why is it necessary to hedge an ETF in CHF which assure you to convert at any moment the amount you possess in physical gold bullions coined and kept in Switzerland? More generally: why is gold coined in Switzerland valued in USD?

why is gold coined in Switzerland valued in USD?

Cause that’s how they do it everywhere. USD is the world’s leading reserve and trading currency.

I was wandering if choosing the hedged version but reading some comments above, maybe not?

If you believe the dollar is going to depreciate against the Franc, maybe. Though I don’t really know why would need to consider this as part of your Gold investment. You can hedge the currency risk independently of that.

You can hedge the currency risk independently of that.

Could you please elaborate on that?

You don’t need to have it baked into your Gold ETF product.

You can do instead with separate products. Smaller currency fluctuations, for instance, I wouldn’t hedge against them on a product that’s primarily intended for risk mitigation.

Gold is “currency”. Why would you hedge a currency to another currency? Nonsense.

If you want to invest into Gold, then the currency hedge doesn’t matter, you’ll have the same amount of gold at the end no matter what. Hedging into CHF is currently very expensive and by implementing such a hedge, you would add another side-bet: CHF will appreciate vs. USD into your gold position. Only consider this if you are as convinced on the second leg (currency appreciation) as for the first one (gold appreciation). Due to negative interests in Switzerland, the currency hedge is not cheap. CHF is more correlated to Gold vs. the USD, hence, I would also suggest to forget about the hedge first. The hedge can still be done as a side trade (e.g. forward SWAP, options, borrow/ reinvest) if needed. Compare the hedging cost of the ETF vs. the DIY version first though.