What to do about old mistakes?

Ages ago I bought shares of several companies. A very unmustachian thing to do, but this was when I was younger and dumber.

Some of those shares did really well (the best is CELG, +205%), and some did terribly (worst is EDF, -88%). Globally I’ve made money, especially taking into account the dividends, but I would have made a lot more with ETFs.

I’ve been keeping those shares around in case the crappy ones rebound and I haven’t sold the good ones because I still have plenty of extra cash to invest. But now I wonder if that’s really the best strategy.

What would you guys recommend? Should I sell everything and put it into my ETFs? Should I only sell the winners and wait for the losers to recover one of these decades? Should I do nothing until I’ve invested all the extra cash?

I would for sure sell the winners and investigate a little bit about the losers, in order to discover their recovery chances. I’ve actually done the same last year with my stocks…

If we’re talking about old mistakes, I wonder what should I do with my CT account. Around half of my portfolio is there, invested in VUSA and VEUR. At IB I have VT and VXUS. So that’s a weird combination. I wonder if I should sell at CT and move the cash to IB, or just leave the things at CT the way they are.

Do you keep your portfolios spread over several brokers? Like, if the SIPC protection is 500’000, if someone had a portfolio of 1 mln, it would make sense to keep it at two brokers, right? Any tips, experience?

I would for sure sell the winners and investigate a little bit about the losers,

Why not investigate both? If the winner’s price, says, doubled because earnings doubled and not due to some hype, it deserves at least as much attention.

I’ve been keeping those shares around in case the crappy ones rebound and I haven’t sold the good ones because I still have plenty of extra cash to invest. But now I wonder if that’s really the best strategy.

Well, since capital gains taxes and tax loss harvesting are out of the question in Switzerland and you say you’d rather prefer to hold an index, I think the decision process is straightforward. Which of your stocks do you believe would outperform the index going forward? Keep those (“none” is a fair answer, if you’re not sure or don’t want to spend much time researching) and swap the rest for the index fund.

I don’t know how to judge which stocks may recover, what should I look at specifically?

I’m getting dividends from these stocks, so I’m not in a huge hurry to sell them. It probably is the right thing to do, though…

if you don’t have any better decision basis, then just convert these stocks into what you IPS says, e.g. you ETFs. this is rationally the best decision. whether those still-low-stocks wake up one day you don’t know any better than all those professional analysts, since they too seem to value these stocks at current prices.

having certain stocks is a really bad reason for sticking with them in the future. sounds somewhat related to the sunken cost fallacy.

I don’t know how to judge which stocks may recover, what should I look at specifically?

Well, there’s two sides to stockpicking: the numbers and the story. The numbers you can easily check for example on morningstar or finviz or tons of other screeners and compare them with your target index. The story is the more difficult part, check the news, seekingalpha, your gut feeling…

I have the same situation and also no clue whether I should sell old ones and buy VT. I keep them as I don’t want to pay transaction costs.

I also wonder whether it makes sense to spread investments into multiple brokers or rather it’s better to keep everything at IB. But this problem probably deserves its own thread.

I think I made a decision recently, that I will not transfer my money out of CT. Instead, I will buy VEUR and VFEM. On IB I will hold VTI and VXUS and keep investing there. Starting with a slight overweight of Europe and Emerging Markets, it will diminish over time.

a slight overweight of Europe and Emerging Markets

I can understand the overweight of EM, but why Europe?

And why not VT?

Ideally, I would not buy any of these. But I have an account at CT, and I guess it’s not a stupid idea to split your money over at least 2 brokers.

As for the question: why not VT over VTI+VXUS. I’m asking it myself.

Eventually, the difference is minimal. I still don’t know which I like more…

Still don’t get that point. Europe in terms of economic long term prospects is like Japan - or even worse because it’s has the same demographic problems, but additionally way less productivity due to difference in work culture and socialist economic policies harming accumulation of capital.

I agree with the rest though. I’d also go for VTI+VXUS, plus some overweight of EM and small cap, if I weren’t so lazy.

BTW, are you selling VT and buying the new stuff? Does it cost a lot?

I see your point. Europe looks kind of screwed at the moment and Japan is not a nice example. The ticking bomb of the pension system, aging society and inflow of lazy/unskilled immigrants do not cheer me up. I just learned today that the Polish country, on top of its 1 trillion PLN debt, owes 4 trillion to future retirees. That is almost 3 times the current GDP of Poland.

Maybe I will not be buying more VEUR then, just keep the ones I have and just exchange my VUSA to VFEM.

I keep my VT at IB to selling it to buy VTI should cost pennies, right? A few dollars.

While it’s impossible to predict the future, there are many indicators we can look at. While I am also not so bullish about the future of Europe, I’m very fascinated by progress in the Chinese hemisphere (China itself, Taiwan, Hong Kong, Singapore). With that respect, I’m also heavily overweight in those places. The trouble however is, we’ll only find out after many years if our choices were right.
China will also have a retirement problem at one day. But for now, it’s still growing like crazy. Never before 800 million people got lifted from poverty into some kind of middle-class lifestyle. These customers are hungry for different foods, experiences and to live a life like people in the West now. Companies that support these demands will profit. However, I’m also a big fan of the diversified approach.
One day I suppose the currency-levels between East and West will get shaken up to represent PPP (purchasing power parity) which has been depressed for a long time. Just my two cents. Interesting conversation!

I’m very fascinated by progress in the Chinese hemisphere (China itself, Taiwan, Hong Kong, Singapore). With that respect, I’m also heavily overweight in those places.

Burton Malkiel provides some excellent examples of ETFs for this region in last edition of “Random Walk Down Wall Street”: 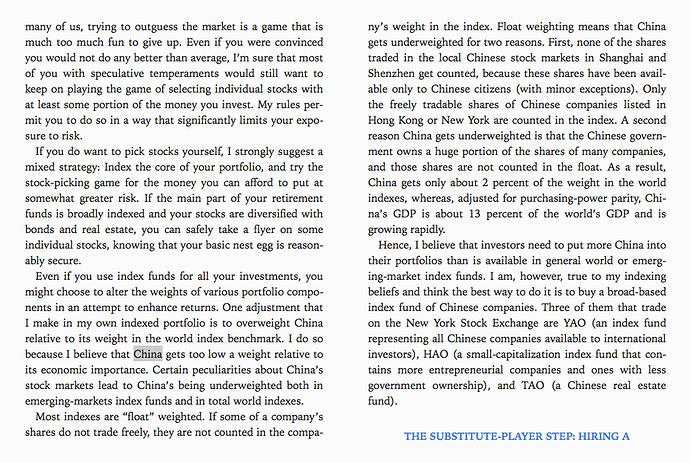 PS. I’d combine these three with VWO (which is 34% China anyway), but I’m not sure yet in what proportions.

For a diversified approach it starts with the ETFs 2823.HK or 2828.HK - however, due to huge valuation of the financial sector you’ll be buying a huge proportion of banks which you might want to avoid. Hence, one of my favourite mutual funds (yes, mutual funds with high fees) for equities ISIN LU0067412154 (fund manager Bin Shi focusses on domestic consumer demand growth - he had a huge outperformance in the past). For fixed income my favourite is ISIN KYG9319N1097 - accredited investors only - it’s basically a Chinese High Yield portfolio and about 90% of the issuers are government linked.

Furthermore, you can explore the largest infrastructure project in human history, One Belt - One Road, into which the Chinese government is pushing tons of money in the years to come. It’s benefitting the railroad and infrastructure constructing industries in the coming 5-10 years.

Due to the Hong Kong - Shanghai and the Hong Kong - Shenzen connect foreigners are allowed to directly invest into locally listed “A” shares since two years. Requirements: you need to hold sufficient Renminbi in your trading account and your broker needs to have the respective access.

A further upcoming boost will be from the inclusion of domestically listed shares into the MSCI Asia and World indices at one point in the near future. China is heavily underrepresented in there. Imagine what a shift of the MSCI allocation could do to the respective share valuation when all the passive money has to come in.

What ETFs, funds, stocks or topics around Asia are you following @Joey?

So currently I’m not following anything specific yet. My plan was to just buy one All-World Fund and be done with it, but I keep catching myself looking at the current world portfolio and trying to optimize it.

These are my speculations/thoughts:
It comes down to this that for the next 15-20 I don’t see the US outgrowing other regions like it has in the past. When looking at Europe, half of the countries are not doing really well and don’t make me want to invest in them. Then you have EM which consists of a wild mix of geographically seperate entities. I would like to differentiate here. I have no interest in investing in Brazil or Russia specifically so my focus landed on Asia.

Of course these are just my thoughts I am probably completely wrong.

It is good that there is a post about mistake. Here is one I made today and would appreciate to hear your views.

I bought for 20kCHF ETFs this morning (All World + Swiss Mid caps). Only a couple of hours after it went down leading to a loss over 400 CHF (issues with Turkey).

I do not try to time the market here, but it is common knowledge that one should not trade early in the morning. I also know that losses are normal but when it comes only a few minutes after a trade, it is a bit hard not to feel like a complete idiot.

The loss is not massive but could have been easily avoided. Long story short, how do you go with such mistakes?

Easy come, easy go, if the market panicked after hearing some bad news, it can rebound when people calm down. You say trading in the morning is bad, but “smart money” is defined as people who make their trades in the first minutes after opening and a few minutes before closing of the exchange.

If you’re trading on European exchanges, I think it’s best to make the trades in the small window when the European and American exchanges are both open, i.e. 15:30 - 17:00. It’s not something I read anywhere, I just think it makes sense.

So you lost 2%. Don’t sweat it. Remember that it’s not a loss until you’ve sold

. And with the bad news piling up, I would not be surprised if we would see the market drop by 50% pretty soon. The bad news being: Trump raging the tariff war, record deficit in the US, Fed raising the interest rate and going forward with quantitative tightening, record P/E, 10Y/2Y bond yield curve reversing, Facebook share price dropping despite solid results…