Just have a question about a fund. My father who is totally ignorant about investing was proposed to buy this fund by a financial advisor at his bank, which he did. Looking at the fees and the timing it doesn’t look like the best option (I know you can’t time the market but if I had to put everything at once I would have waited until November because of the infamous October dips). He invested everything at once, no chf cost averaging. Should I tell him to invest in an ETF instead?
It just baffles me how someone can invest his money without doing proper research first

thanks for your advice!

Blackrock’s CHSPI is practically same thing, even better - 200 companies, and several times cheaper: 0.10% TER instead of 0.61%

I don’t think either is a particularly good fund - half of both is Nestle, Novartis & Roche. That’s not only terrible diversification, but also a gamble on forex - all of them are giant multinationals who source only a tiny bit of their earnings from Switzerland in CHF,. They merely happen to be hq’d here - is that a good reason to invest in them?

But if you really want to invest in Swiss stocks, then the SPI index is the best one. The popular SMI has only 20 companies and the big three have an even bigger share there. And the SLI is not market capped. I have no idea what is the difference between index fund and etf for a Swiss investor.

If he invested all at once then very good. What is the point of putting a portion every month.

I agree that having 50% invested in 3 big companies, 2 of which are pharma, is not a very good diversification.

Well his argument to invest in a 100% Swiss index is the stability of the Swiss economy. It feels safe for him because if the fund were to collapse it would mean the Swiss economy would too, which is unlikely. I told him to ask me first before investing in anything but I guess the advisor saw an easy prey. I can still easily convince him to sell for a better option.

What is the point of putting a portion every month.

Investing everything at ATH is a bit stupid IMO.

Investing everything at ATH is a bit stupid IMO.

Well I had to google ATH to understand what you mean, sorry not so good with acronyms.

No, I don’t think it’s stupid to invest during all-time high, because the market is in this position for most of the time. I suggest you read this post: 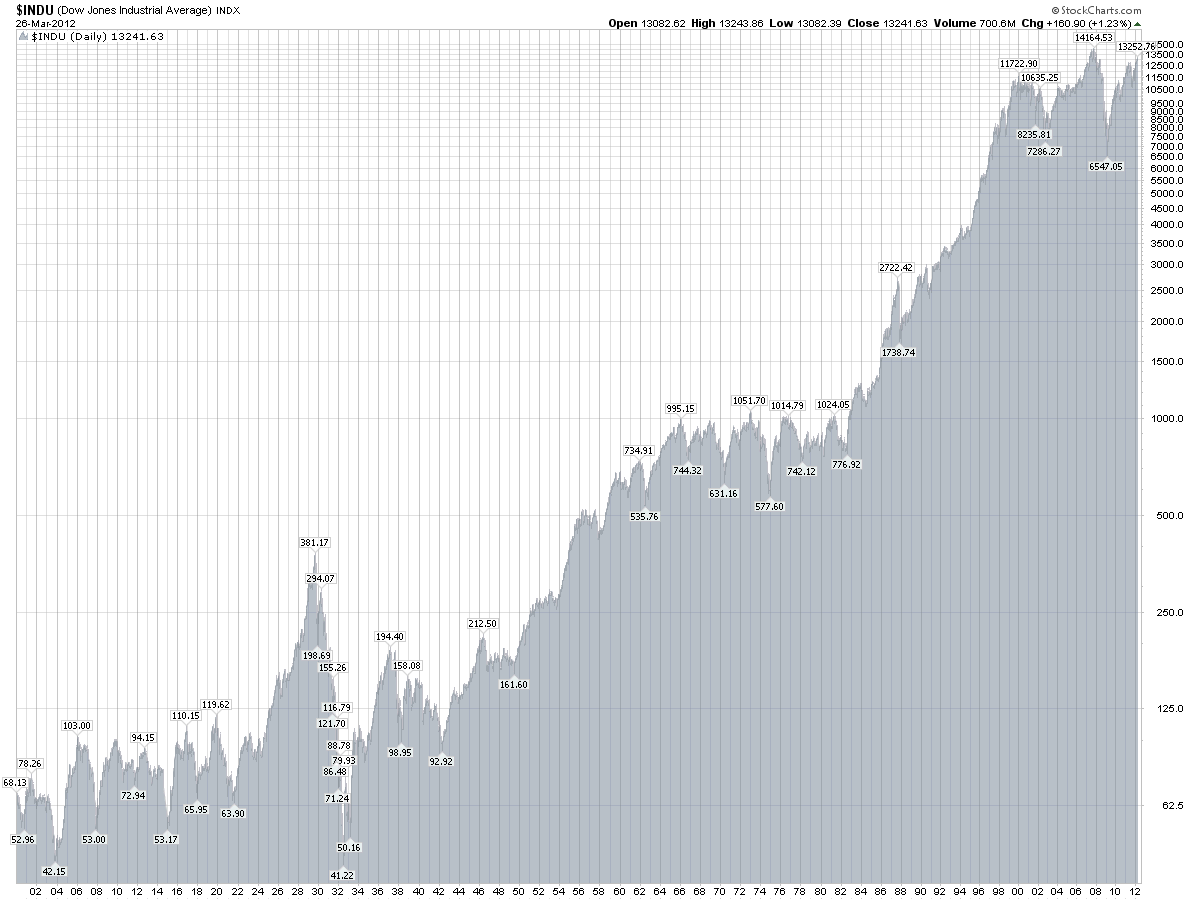 As I sit here typing this afternoon the S&P 500 is trading at 1670, up 14% since the beginning of the year. 27% over the last 12 months. The very definition of a raging Bull Market. Add to this the fact that it has more than doubled since the...

Well his argument to invest in a 100% Swiss index is the stability of the Swiss economy.

BS, global stock markets are highly correlated these days, if a crash comes everything will very likely crash together. Also as I already pointed out, Nestlé Novartis Roché generating only a tiny bit of local sales are not actually representative of the real swiss economy, but rather are giant transnational companies. The fact that they are listed on SIX and shares are quoted in CHF is a false sense of security, they could be just as well be listed in USD on NYSE or NASDAQ and not much would change.

Thanks for the link. Yeah it’s hard to call the tops and bottoms.

BS, global stock markets are highly correlated these days, if a crash comes everything will very likely crash together

Also a thing I don’t understand is when I look at the chart of this fund:

There’s no such spike in SPI, and you should be buying at end of day NAV with non-ETF funds, and this fund is practically almost following SPI index

Ok, 0.61 TER, 0.48 Management fee and 1% front load fee… I should just tell him to sell and gtfo ubs.
Considering timing the market, I still think it’s wise to do some technical analysis when planning to enter the market. Looking at some indicators I don’t think it’s a good time to enter (we just had a death cross after a long bull run on the ishares, resistance at ATH still not broken, looks like things run out of steam). It would be wise to wait for a breakout or a breakdown.

It would be wise to wait for a breakout or a breakdown.

as long as you ask people of mustachian thinking, the answer is clearly no. the perciever higher likelyhood of a soon to come crash due to the current market situation is a purely psycological thing. based

It would be wise to wait for a breakout or a breakdown.

I would recommend investing globally, not only in Switzerland.
In my opinion, the most diversify index for Switzerland is the SLI which capped the four biggest companies at 9% and the following at 4.5%.

as long as you ask people of mustachian thinking, the answer is clearly no. the perciever higher likelyhood of a soon to come crash due to the current market situation is a purely psycological thing

Are you sure it’s just psychological? If you consider the CAPE ratio

The cyclically adjusted price-to-earnings ratio, commonly known as CAPE, Shiller P/E, or P/E 10 ratio, is a valuation measure usually applied to the US S&P 500 equity market. It is defined as price divided by the average of ten years of earnings (moving average), adjusted for inflation. As such, it is principally used to assess likely future returns from equities over timescales of 10 to 20 years, with higher than average CAPE values implying lower than average long-term annual average r Thus, C...

then we can see that stocks now are overpriced, which means the probability of increasing your investment in the next 10-20 years is low.

The market is very expensive compared to the past by all metrics, no doubt about that, but the real question is what else can you buy. Everything’s rather expensive these days. Bonds at 2% yield? That’s a P/E of 50!

As I’m still learning about ETFs and brokers I’m just putting the money I don’t need into the 3d pillar. I know that it’s not as profitable as ETFs, but still better than the savings account. The rest stays in cash in the hope for a bargain when the crash comes.

I went through this myself back in April, it also looked like everything was very expensive and it was a bad time to invest. VT has gone up 22% since then.

Past performance yada yada yada. You know the drill.

For me the decision is difficult because that would be the first experience with stock market and I don’t feel like getting smashed by the crash that could be close if you look at the CAPE ratio now.

Look up dollar cost averaging if you have not already.

If you just invest the same amount every month/quarter/year, it will average out in the end. If you however panic and stop buying when it crashes (which is apparently a thing people do) then it would of course suck.

Gerd Kommer sais that dollar cost averaging doesn’t work. His book is the most competent text I read so far on passive investing.

let’s define “work” first:
it fails at getting better returns than investing the lump sum available, statistically.
It works in that sense that it is nothing but a psychological trick for people to finally get invested, which, on average is better than sitting on cash
it works in that sens that it reduces volatility (effectively it is like having a decreasing cash position in your portfolio) but at the cost of reduced returns

so if DCA makes you stick to your investment plans, it’s a win.

and yes, i consider Kommer’s books as among the best sources, especially for european/german based people. most of it also directly translates tu swiss residents