Tips on how to choose an ebike?

In general the rating for motors go as follows :

However for longevity, you cannot look at the motor itself, but also the whole power transmission (Drive shaft, chain/rubber etc.).
A cycle builder will say : ok, an average cyclist will start/stop the bike so many times, and during normal driving I can expect such a power output. So I need to design the parts in this way to reach 30’000 working hours (or whatever).

So you have to look at the whole machine to see if damage is possible. Personnaly, I would doubt my capacity to do this analysis. (plus of course the risk of insurance refusing all possible refund because of tampering with a safety system)

So what you mean to say is that the 250 / 500 W is not simply what the motor is capable of, but it indicates what the entire bike is designed to handle? I guess this is similar to chip tuning in cars. You can increase the horsepower of your VW Golf, but if it has a weak gearbox, weak brakes, narrow wheels, etc, you risk breaking some parts of your car faster, not necessarily the engine?

yes. for instance there are 25 km/h ebike with traditional rim brakes, but if you take away the limits, and want to go faster, then you do need disc brakes.

I was more focussing on the power train part but yes, basically thats it.

Side note : always wondering how it can be that the brakes on e-bikes look like regular cycle brakes. With the extra weight and speed it should actually lead to bigger break systems… or higher wear and tear.

Side note : always wondering how it can be that the brakes on e-bikes look like regular cycle brakes. With the extra weight and speed it should actually lead to bigger break systems… or higher wear and tear.

Regular bikes can and very often do go faster than pedal-assisted e-bikes, and the weight difference of pedal vs e-bikes (let’s say 10 kg?) is not very large compared to the possible weight difference among users.
In most situations decent rim brakes would be more than enough for slowing you down, what limits braking performance is usually the traction of the tires, if not the skills of the driver.
That said disc brakes are easier to modulate and are much more consistent in the wet/dirt so for commuters they are probably a no-brainer.

My bike has 45 Nm and I find it too low. You don’t have enough boost from the start, and too little support when going uphill.

A couple of considerations

But are you sure that torque isn’t what really decides? If we have two 250 W ebikes, but one has 40 Nm and the other has 65 Nm, will they both perform the same uphill? Torque is a force applied at an angle, as if you were pulling a wrench attached to a nut.

I thought that what makes the engine have high power is the ability to spin fast. So if we take two different engines:

Then it has to mean that the first engine delivers its maximum torque at 4 Hz and the second one at 10 Hz?

So I guess we would have to see the full torque curve to know, but I think electric motors, unlike ice, deliver full torque for the entire range of rpm?

OK I found some charts. 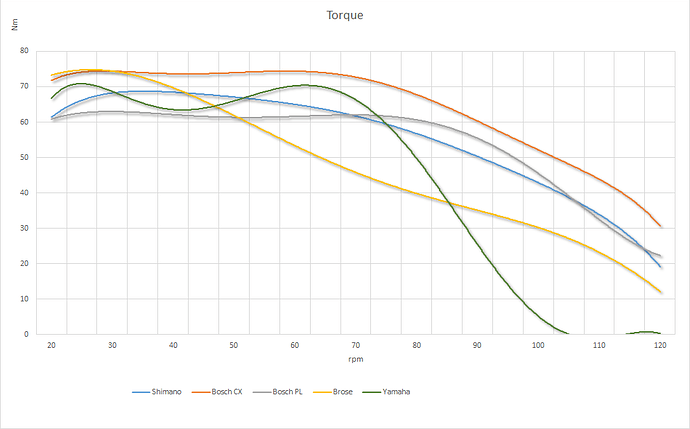 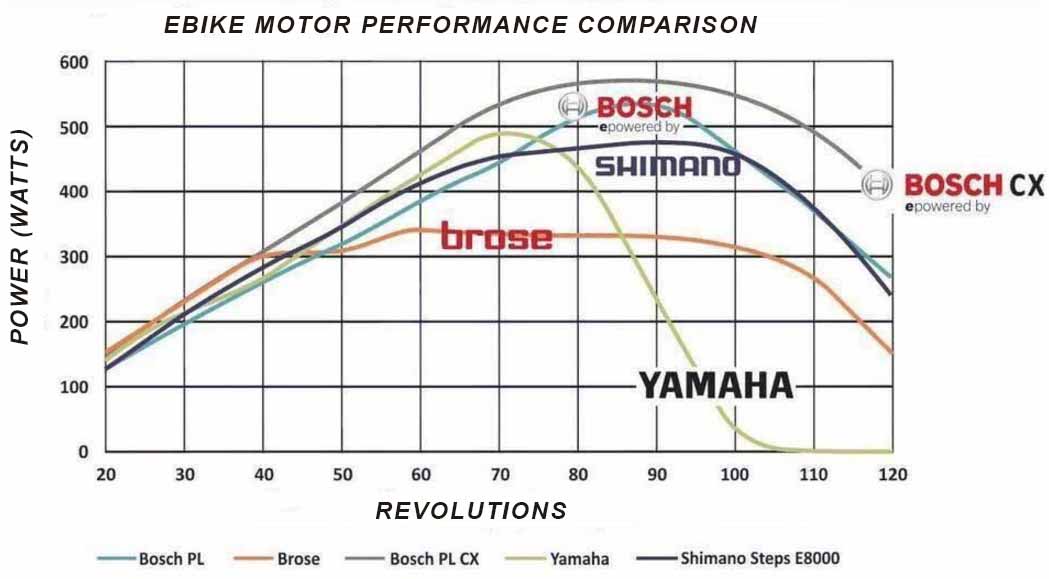 So yeah, it looks like a high-torque, low power engine will give you an advantage at low rotations, but the torque will drop at higher rotations. Whereas a high power + low torque motor will be slow at the start but will maintain the torque up to high rotations.

But of course there’s also the transmission to consider.

But of course there’s also the transmission to consider.

Exactly…it’s important to downshift on the climbs (like you would on a regular bike), the ebike motors are built to deliver max power approximately in the same range of rpm that the human body does (we’re talking 1-2 Hz, if you can pedal at 4Hz you’re not human

Torque can become a limiting factor if you’re hitting very steep climbs at low rpm. But even on a 5% incline you already need much more than 250W to go at 25 km/h, so assuming you’re downshifting properly the climbing speed is probably limited by the power output.

This is not the correct formula, the rotational speed needs to be in rad/s instead of Hz. 4Hz=25 rad/s so in your example you’d get 1625W…but again 4Hz is impossible to sustain on a bike

But even on a 5% incline you already need much more than 250W to go at 25 km/h, so assuming you’re downshifting properly the climbing speed is probably limited by the power output

I went once up a hill, 1 km height difference over the distance of 10 km. That’s 10% average incline. I was going at 10-15 km/h and of course using the lowest gear. A speed lower than 10 km/h was not possible, as it would become too difficult to pedal. I could put my whole weight and still I would not have enough force. So I think my bike’s transmission just doesn’t go low enough to allow going up very steep.

But again, power is just an outcome, no? It’s the maximum energy conversion rate that is reached at the best combination of torque * rpm. If you were free to change the “gearbox”, you could make a high-torque low-power engine reach higher power by changing the transmission, or?

This is not the correct formula, the rotational speed needs to be in rad/s instead of Hz. 4Hz=25 rad/s so in your example you’d get 1625W…

image1338×294 14.1 KB
You just blew my mind. I totally got it wrong! I thought Hertz is the correct unit to use. But no, the unit of angular velocity is radian per second.

Google somehow can’t convert it to watts when I provide radians or revolutions. So the correct formula is:

If you were free to change the “gearbox”, you could make a high-torque low-power engine reach higher power by changing the transmission, or?

Nope…the max power output is defined by the motor (the nice graphs you posted above) and is tipically reached at a very specific crank arm speed. The gearbox doesn’t increase your max power, but it crucially allows you to access it at different wheel speeds, allowing the crank arm to turn at the optimal rpm regardless if the wheels are turning very slow (like on a steep climb), or much faster (downhill)

That said it really sounds like your trasmission is not going low enough for a 10% hill(which is fairly steep tbh).
The good news is that on bikes its actually quite easy to change the gear ratios to a certain extent. If you do these climbs often you can ask your bike shop to install larger sprockets or smaller chainrings next time you wear them out (they should cost pretty much the same regardless of their size). You will be losing some top speed on the downhills but that’s probably not a big deal.

The gearbox doesn’t increase your max power, but it crucially allows you to access it at different wheel speeds

OK, so the gearbox does not change the power, but it changes the torque at the wheel, correct? 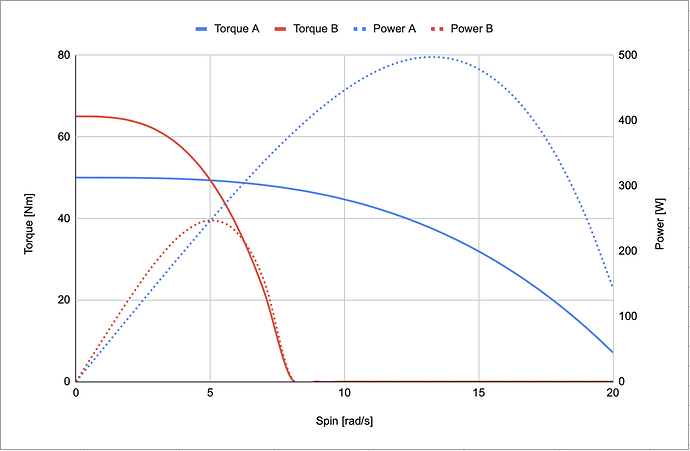 In order for bike A to have higher torque at the crank, but lower power, it has to have higher friction/heat losses, which prevent it from reaching high rotation speed?

But in that case, we can see that in the 0-5 rad/s range bike A delivers more power, so it should accelerate faster at low speeds. Does it make sense?

My GF bought the Xiaomi Essential for 320 CHF. Advertised with 20km range and 20kmh speed.

It was still fun to drive. I guess with 60-70kg in BW you’ll be able to get 7-10km in usable range with decent speed. So it will work for my GF.

Get two, one for each foot.

I was thinking for while to get one of those Chinese bicycle upgrade kits (e.g. this one). But I’m still hesitant, not sure what the reliability & legality of these kits are. It would be a more frugal choice I suppose, but I fear there is a high chance of regretting that purchase.