Good day everyone, first of all thanks to Mr Mustachian for creating that website. I decided to post this thread as I’ve been trying to get information on this topic, but unfortunately I’m not 100% confident on the received information.

Here is my issue. I’m Canadian (and now Swiss citizen after being installed in Geneva for 15 years now). I have a great job/life here in Geneva, but I still think about going back to Québec for my retirement (much cheaper). I’m reading a lot on how to optimize my retirement plan, but it’s very difficult as I don’t know where I will be in 15 years from now (I’m 45).

I have a lot of money stuck in my 2nd Pillar, but I would like to know if some people on this forum has REAL experience on how 2nd pillar (or compte de Libre Passage) will be taxed if transferred to Quebec/Canada.

My goal would be to retire and put the cash from my pension company on 2 différent accounts in Schwytz then withdraw 1 account on 1 specific year then the second account on another fiscal year to minimize the taxes (about 5%).

Canadian government told me that they would consider it as a revenu, which doesn’t make sense to me, as the 5% taxes would not be refundable according to bilateral agreements. If the capital is considered revenu it would be highly taxed something around 50%…

I paid a consultant in Switzerland and he told me that he helped many Canadians to do this via Schwytz and the Canadian government didn’t taxed the capital…but as I’m concerned I’m talking about 1Million so 50% would mean 500K in taxes.

Did anyone on this forum ever moved to Quebec and withdrew the capital?

Thanks again for your help on the matter

When was the withdrawal, the year they moved to Canada? The “trick” might have been to not declare it on the Canadian side (the legality of that would depend heavily on the dta).

Unless Canadian taxes are their speciality (unlikely), I doubt a swiss consultant would know anything about the Canadian side of it.

Ask a Canadian consultant instead?

The withdrawal was done the year after they moved. You are right about asking on the Canadian side which I did to an International Lawyer (apparently specialized in International laws) in Montreal, but I felt he was not 100% sure about it as they are not used about the specific terms in Switzerland such as Compte de Libre passage. An of course you have to declare you bank account if you have over 100K in some other countries (if you have a Canadian residency).

Any other ideas? Thanks

Any other ideas? Thanks

Spend a few months/1 year in a 3rd party country with different taxation regimes? Could be a nice way to start your retirement with 1 year in Malta

Skimming the DTA for Canada, it does sound like there’s no special measures for lump sum withdrawal (unlike annuities).

Edit: and remember, if you’re planning for 15y from now, a lot of those things can change (DTA, taxation regimes, etc.)

Edit2: another option could be to transfer to a canadian registered pension, in some countries that’s a possibility

Thanks, I tough about moving for a year or two to Dubai, but you’re right! there is other places I can avoid being over taxes on the capital.

You’re also right to say that in 15 years a lot of things could have changed. But we never know what can happen. I could go back early to Quebec if I loose my actual job and do not find another one that I like.

By the way, if the pillar2 can be recognized as equivalent, the tax would be more like 30%: Tax implications of lump-sum pension payment options - WorkSafeBC - WorkSafeBC 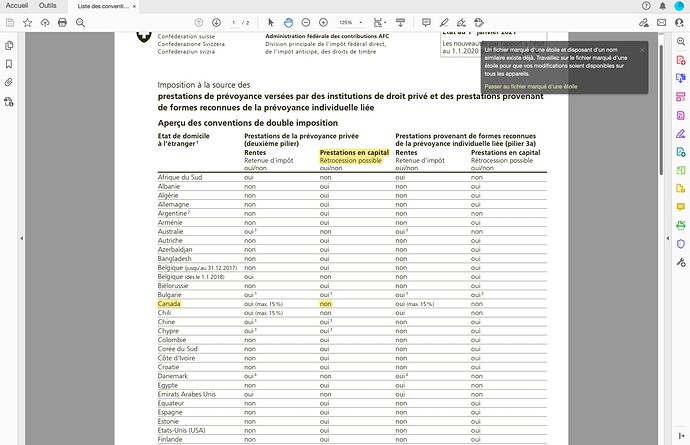 Thanks for the link. This only for Canada, but knowing the Quebec they will surely add an extra taxe to it! Attached you will see why the Swiss advisor told me that Canada would not take any tax, because there is no possible ‘‘Retrocession’’ of the max 15% tax on the capital when withdraw . This is logic to me but still not convinced.

there is no possible ‘‘Retrocession’’ of the max 15% tax on the capital when withdraw . This is logic to me but still not convinced.

That definitely doesn’t mean Canada/Quebec won’t tax it, it only means the withholding is not recoverable.

I agree, and I just found the link for Revenu Quebec, I can add another 20%…Not coolhttps://www.revenuquebec.ca/en/businesses/source-deductions-and-employer-contributions/special-cases-source-deductions-and-employer-contributions-in-certain-situations/pension-payments-retirement-benefits/#:~:text=You%20must%20withhold%20income%20tax%20from%20a%20single%20payment%20from,payment%20is%20greater%20than%20%245%2C000.

You’d still have to pay taxes on the withdrawn capital and you’d be hit with the full tax progression, however, it would be a lot better than being fully taxed in Canada. In Geneva the tax rate would be a very reasonable 8.5% for CHF 1 Mio. In Zurich it would be 11.4%.

Hello Jay, I’ve been told that Switzerland needs a proof that you are definitely gone to withdrawal the capital, meaning you need a proof of your new residency. So I don’t see how you could confirm your new residency and wave the tax…

I agree, and I just found the link for Revenu Quebec, I can add another 20%…Not cool

The link is mentioning withholding at source. That doesn’t say (yet) that you have to pay tax at the same rate upon receiving a lump sum from a plan pension fund abroad.

Attached you will see why the Swiss advisor told me that Canada would not take any tax, because there is no possible ‘‘Retrocession’’ of the max 15% tax on the capital when withdraw . This is logic to me

Don’t mix up things and do note that the “15% max” applies to “Rentes” (second column, see header).
Not to “Prestations en capital” (third column).

Also, the “logic” regarding the “retrocession” is totally wrong.

You’re right! My mistake. To me ‘‘Retrocession’’ means that for example the 5% withholding tax paid in Schwytz can’t be deducted from the Canadian & Quebec tax. For example if Canada is asking for 30%, then I will pay 35% not 25%. As of the ‘‘Source’’ word it’s not clear to me.

For me, this would, very tentatively, and without saying anything about the province of Québec, suggest that Switzerland withholding tax may indeed be final. See this explanation that I could google quickly:

Thanks for the infos. This is why I’m lost in my investments, as I have a tax rate of about 35%. I could buy back up to 1.5M in my 2nd pillar, but knowing that the money would be blocked for 3 years, and if I decide to leave the tax office could cancel my previous deductions up to 3 years. I could buy back about 100K every fiscal year and save about 38K of tax per year. Average interest of my pension plan is 4-5% a year.

I lost quite some money in trading, and now I prefer Real estate and LPP.

People always say you make money in investing in Trading, but they forget that you may as well lost.

No, you can’t reclaim it from the Swiss tax authority (in the place where your pension fund is domiciled).

The Swiss tax authorities would certainly not tell you about any deductions you can make from your Canadian tax bill.

Possible, but I don’t quite think so, since there is a DTA between the two countries. What you’re saying would constitute double taxation - something that double taxation agreements are designed to mainly eliminate.

While I’m merely an ape

with a keyboard, from what I can quickly gather, you have to report in Canada, and it will generally be taxed in Canada - allowing foreign tax credit for Swiss (withholding) tax paid.

Common advice seems to be to transfer it into a Canadian registered retirement savings plan (RRSP) to defer taxes and offset/minimise tax in Canada (and yes, Québec seems to receive some extra special treatment upon withdrawal).

“Jennifer is a 47-year-old Canadian citizen who just returned to Canada after 10 years of living and working in Switzerland. She was a member of a Swiss Pillar 2 Fund…”

Thanks for the link! This guy seems to know what he’s talking about and it’s first time I see an article with a Swiss case!

I’ve been told that Switzerland needs a proof that you are definitely gone to withdrawal the capital, meaning you need a proof of your new residency. So I don’t see how you could confirm your new residency and wave the tax…

Refer to this thread. It seems Postfinance may let you withdraw 3 pillar whilst still a Swiss resident if the paperwork has been stamped by your commune. I have no data if this is possible for 2 Pillar.

Another option would be to move the UK, the UK CH double tax treaty says the pension would not be taxable in UK, you only have to pay withholding tax in CH. I am sure there are other counties, for 1M taxable it would be worth it…

Thanks Barto. Interesting for the 3A! Also knowing that the 2 Pillar would nott be taxed in UK.