So how does waymo do it?

Each Waymo car includes highly detailed maps of the region in which it is permitted to drive. These maps are accurate down to the inch and include precise locations of roads, stop signs, traffic signals, and other driving cues.

Why do you think interpreting camera input is AGI? It’s more like a complex game. You know that AlphaStar beats the best StarCraft II players in the World? And it’s a game where you have to control units on the screen, combat the opponent, mine minerals, produce new units and buildings. And it is doing that based on the visual input on the screen, just like humans. 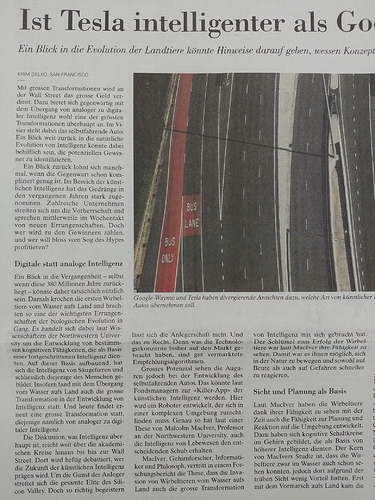 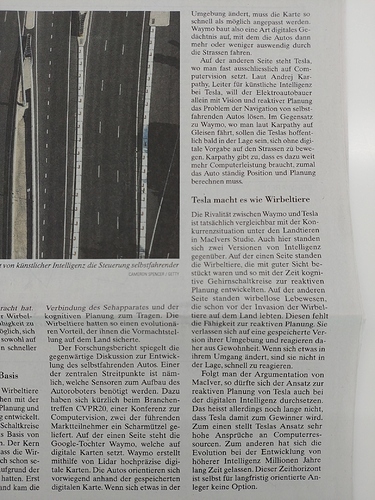 A somewhat journalistic analogy pitting early vertebrates with good eyesight moving from the sea onto land developing cognitive and planning abilities (Tesla) against the invertebrates of the time who mainly “stored” their most common surroundings (Waymo) & weren’t able to adapt/react as quickly to changes/unexpected as the vertebrates. …and the rest is history.

Each Waymo car includes highly detailed maps of the region in which it is permitted to drive. These maps are accurate down to the inch and include precise locations of roads, stop signs, traffic signals, and other driving cues.

But it doesn’t just stop as soon as something not on the map happens.

The vehicle drives more assertively than it has in previous trips, breezing past construction sites at 45 mph with barely a twitch and nudging its way into intersections in a way that feels less robotic than it has in the past. The construction site, with its orange cones and hard-hatted workers milling around, is particularly impressive.

Of course it’s easier to figure those things out if you have a good baseline of what to expect, but it’s not like it can only drive on a millimeter-mapped route and gives up when it doesn’t match.

I don’t have the impression that tesla is close to match that. (and giving up on the extra sensor won’t help them).

TSLA uploaded its 10-Q yesterday and the report contains interesting stuffs. If you are not tired of me talking about accounting stuffs, follow me in a lesson I will call “Profit creation for dummies”…

In the first quarter of 2019 (i.e. six quarters ago), Tesla and Fiat Chrysler struck a deal on regulatory credits. In the 2019 10Q filing, there appeared this note. $140 million of deferred revenue to be recognized “over the next 2 to 3 years”. In layman terms, it means they received cash from Fiat Chrysler in 2019 but did not recognize it yet as revenue because they did not provide the service yet (but in the case of regulatory credits, what exactly is the service provided, and more importantly, how long does it take to provide it?).

In the second quarter of 2019, Tesla recognized none of this revenue, but the guidance language was changed to “over the next 1 to 3 years”.

image1199×514 65.1 KB
And so on for three quarters, not any of these deferred revenue was recognized:

In the most recent quarter, suddenly and all at once, Tesla recognized THE FULL $140 MILLION. This revenue is widely believed to be pure margin. In other words, this one decision accounts for ~132% of Tesla’s claimed profits for the quarter. (page 12 of the last 10-Q)

And that, ladies and gentlemen, is how you fake a profit to trick the S&P 500 into including your stock in their index.
This accounting trick is known as “dipping in the cookie jar”. On one hand, you can say it is clever that they put aside some backup for planned rough time. On the other hand, it does not really fit into the narrative of a company drowning in demand…

But that’s not all!

On page 43 of the report, the company says:

In other words, Tesla does not indicate its true cost of building cars, but what it would be if maybe customers would exercise their buyback option in the future. Nobody has any clue what the true costs are.

The growth story in one chart

Page 35, TSLA gives a breakdown of its sales by region:

In other words, except China, the rest of the world was not really eager to buy their cars. So much for incredible demand.

That’s it for today.
Given the expectations implied by the stock price, these reports contain more red flags than a Christmas tree and there is no way i would ever risk my money in it. But the narrative can still last a long time!

And I don’t think it will go bankrupt any time soon. As long as the price stays at stratospheric levels, Musk can still raise new equity to keep the company afloat, as he did in Feb 2020 when Tesla raised around $2 billion.

If you are not tired of me talking about accounting stuffs

except China, the rest of the world was not really eager to buy their cars

Yes, but up until “short shorts” people didn’t expect them to be profitable. The Fremont factory was closed for some time. Other carmakers recorded -30% drop. Maybe there are some commentators saying that this profitable quarter is a proof for Tesla demand, but others point to the regulatory credits and Giga Shanghai.

I think Tesla revenue wasn’t growing, because they were limited to the Fremont factory. Now they have Shanghai, which saved their Q2 2020. By the end of next year, we should have Giga Berlin & Texas, which could double their vehicle output. They have learned a lot with the first factories and I expect the new ones to really cut the costs and bring in some solid profit margins.

Me neither, last I checked, they had $8.6B in cash and who knows how much they can squeeze out of S&P 500 inclusion.

By the way, at the beginning of July I was in Tesla salon in Zurich and it was almost empty, there was only one Model X. The guy told me that they were given orders to sell everything to boost Q2.

5 posts were split to a new topic: Using a company as pre-tax buffer

I agree. But I also don’t think business owners will or should expect “sabbatical years” so they would probably just pay out as much salary as makes sense while keeping the progressive tax in mind on a year-by-year basis.

What I was trying to say is that it’s not really a vehicle to save taxes unless you expect decreasing revenues, right?

it’s not really a vehicle to save taxes unless you expect decreasing revenues, right?

Correct, but a FIRE person is exactly such a case. You give it all you got and then you take it easy, once you’ve reached your goal.

Bojack out of curiosity isn’t a bit disingenuous to equal revenue with demand? They did introduce leasing progressively,so while revenue may get lower (because of leasing) demand can stay strong, right?

Interesting point, I don’t know. But would it not only be a concern if leasing was introduced only recently? Or if we saw a spike in leasing contracts and a drop in sales? Also, is Tesla itself the lessor? Or is there a bank in between that pays Tesla the full amount up front and handles the payments?

Next quarter should be better: https://www.businessinsider.fr/us/tesla-received-government-coronavirus-bailout-elon-musk-stimulus-relief-criticism-2020-7

I just came across a very well documented report gathering all the suspicions about TSLA:

Among other topics, the author talks about:

If you have some time, it is really worth reading the report, if for no other idea of making your own opinion. Of course, counter-arguments are welcome!

Between the various suspicions of fraud and the failure of accounting numbers to sustain the narrative, i wonder how long the stock can manage to stay at such elevated levels…

100 pages, that’s a long read. I mean, the report looks interesting, it has photos and charts. You really read it all? Are these things that you point out all recent? I could understand if they cut corners in the past. After all, they are the first new car manufacturer in a long time.

I mean, the report looks interesting, it has photos and charts. You really read it all?

There’s lots of hyperbole (“multi billion dollar fraud”, right on the third page).
However, it does make some plausible claims and tries to back them up with sources.

After all, they are the first new car manufacturer in a long time

LOL. First one that has actually produced a car. You should check out the red flags about Nikola, their CEO is full of shit.

You should check out the red flags about Nikola, their CEO is full of shit.

I’m sure there had been new car manufacturers that “actually produced” cards shortly before Tesla. Just as there have been ones that did a bit later (Fisker was definitely not bogus, even though they had to fold a bit later).

I would much rather have TSLA shares than NKLA. That being said at these prices I’m getting neither.

You mentioned some car companies that either failed or exist only in a powerpoint presentation. When was the last time that a company was founded that reached at least the scale of Tesla?

Btw I started reading this paper. It is written in a very preconceived way. It reads like a typical TSLAQ story. Everything that can, is put in a negative light. I’m sure you could make similar stories about Bill Gates or Steve Jobs.

At least the original Fisker seems to have delivered and sold a four-figure number of cards though. Nowhere as many as Tesla before they failed.

When was the last time that a company was founded that reached at least the scale of Tesla?

To be honest, that’s a very specific question. And I’m honestly not even into cars.

It is written in a very preconceived way

Admittedly, I concur. But…

It is written in a very preconceived way. It reads like a typical TSLAQ story. Everything that can, is put in a negative light. I’m sure you could make similar stories about Bill Gates or Steve Jobs.

When was the last time Microsoft or Apple had that level of leadership fluctuation at the very top?

When was the last time Microsoft or Apple had that level of leadership fluctuation at the very top?

Let’s see… Musk would have to be outed from Tesla, start another company, and then be welcomed back in glory after a few years. Then he would have relived the “fluctuation” that Jobs went through…