@bojack Sorry for so many posts on this thread…I am at the very point of buying on PF and since I will indeed hold, I wanted to have some last clarification/reassurance

But you mentioned 500k at PF before IB (rather than commonly held 100k then IB). If I did this, it would obviously keep me longer at PF since I am not anywhere close…with that context, I am planning on a 1fund approach for simplicity. Would you agree that I should still buy 1) VWRL to simplify and avoid the higher exchange fees at PF for a US Based Fund (ie VT) and 2) initial 15k lump sum then 5000-7500chf per quarter or again save for 1x/yr lump sums? I was thinking per quarter - my motivation was simply getting earlier into market more than it was for DCA.

Your post is causing me to question just the optimised frequency on my scale and not the fund or the broker at this point for me.

Any advice is appreciate from you or anyone else

If someone is willing to invest in USA, he might as well do it via IB. Then it’s crucial to declare it in DA-1 tax declaration, in order to reclaim the withholding tax.

But I’m just saying: if you already have a PF bank account, it’s very easy to open brokerage, transfer money, purchase ETF and then keep an eye on it. That’s great for those afraid to start. And once you’re in this setup, you might keep it as long as your portfolio is not too large. Then, for diversification, you could consider IB, because it really saves you some money.

Sweet thanks! Super appreciated! I’ve already got the PF custody account and have currently my first 15k, this will indeed only be my second purchase. Also wanted to do it now to get above the 25k and kill that 5 CHF/month rather than wait more. So no longer fear of starting, more trying to build a good habit from the start rather than second guess later. I’ll shoot for 2x a year at 15k for now and try for 3x in the next few years. Cheers

I did 5k buys when I used PF to buy VWRL.

The opportunity cost to wait until you have 10k is higher than the trading costs.

Yet a single 10k chf trade with PF costs more than regular investing and rebalancing including fx-exchange for a 5 fund portfolio at Interactive Brokers for a year.

The same strategy would cost between 1000-1500 chf + fx-spread * newly invested funds + probably some cost due to worse execution.

Good point: the opportunity cost of staying out of the market is much higher than any potential fee savings.

IB+US is considerably cheaper than PF+IE, but some people don’t like the long tail risks that come with dealing with a foreign broker and the tax office of a global bully.

Very valid points. I do indeed plan on switching to IB in the future once its warranted for scale, but like @Bojack mentioned, I think PF is better for convenience and simplicity for now. In a few years (and after all the different discussions are clear on the 2022 rules for US Based ETFs), I will have had a few more years of learning and saving to warrant the change (while I keep an eye on costs at PF). If I stay on Ireland based CHF traded, the FX is not an issue for me and the 90CHF is paid anyway, so in the meantime, I also feel that:

The opportunity cost to wait until you have 10k is higher than the trading costs.

FYI, the credits were… credited to the account only a few days after my trade. So I still have untouched 500 CHF. The 180 courtage has not been deducted. I contacted PF and they offered to credit me with 180 in 2022, provided that I do not use up all the credits in 2021. I can live with that

I’ve got an e-trading related question. I opened an account, bought some VWRL in CHF and I saw my first dividend. To my surprise, the dividend was in USD. And indeed, when I go to SIX website, they show dividends in USD, even if the trading currency is CHF. So now I have some USD that I will have to convert to CHF, in order to reinvest. Quite annoying, especially that the exchange rate will probably be less than perfect. If I remember correctly, Corner Trader converted the dividend directly to CHF. What’s your take on this? Can you somehow tell the E-Trading/Swissquote portal to automatically convert your dividend to CHF? Or how do you go about it?

I don’t know about E-Trading, but I have the same problem on SQ where I get dividends in USD. I reinvest that USD in VT to avoid fx fees which are quite high.

Yes, Corner Trader converts the dividend directly to CHF but charges 0.5% fee for it.

E-Trading uses the software of Swissquote, so I assume it’s the same. This is quite annoying, I didn’t plan for that…

…and you can’t even move them out for free, I believe. You need a swiss postomat with USD.

Kind of surprised that you’re surprised.

The same share class of ETF shares will of course have the same (just one) base currency, regardless of where they are listed or traded.

Can you somehow tell the E-Trading/Swissquote portal to automatically convert your dividend to CHF?

Is this about PostFinance or Swissquote?

Quite annoying, especially that the exchange rate will probably be less than perfect

I’d be less worried about the exchange rate than any minimum fees for exchange.

I don’t know what PostFinance charge, but it’s not probably not more than 1% or (at most) 2% spread - on your 2% average dividend yield. Compared to your overall investment, that’d be a 0.04% drag. Quite negligible.

Kind of surprised that you’re surprised.

I wrote why I’m surprised. In Corner Trader I received the dividend in CHF, but as pointed by @sugoi, there was an automatic conversion and it wasn’t for free (which I simply don’t remember anymore). Moreover, if the trading currency is CHF then it would be convenient and logical that you receive your dividend in CHF from the ETF provider. If they accept your CHF when they sell you the shares, why can’t they pay you dividend in CHF, too? Clearly the only reason why anyone would buy the VWRL.CH is the currency convenience, or?

Is this about PostFinance or Swissquote?

As stated multiple times, E-Trading of PostFinance is operated by SwissQuote as a white label. When I made the security transfer, I even had to put SwissQuote on the form.

it’s not probably not more than 1%

For SwissQuote between CHF & USD it would be 0.95%. I think E-Trading uses these prices too. 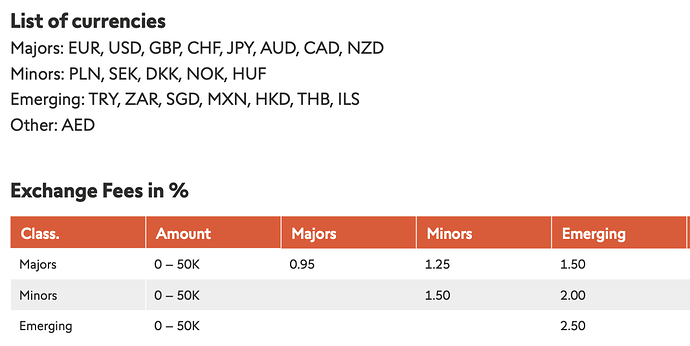 Compared to your overall investment, that’d be a 0.04% drag. Quite negligible.

You could open a USD account at Postfinance which is free and do the exchange through wise.

which is free and do the exchange through wise.

How much does a USD SWIFT bank transfer from PostFinance to Wise cost?
And how much does a currency conversion from USD (to CHF) cost with Wise?

Moreover, if the trading currency is CHF then it would be convenient and logical that you receive your dividend in CHF from the ETF provider

Not really - the fund provider will only only distribute in the fund’s currency. Which is as it should be, rather than taking one random exchange rate at a time that suits them.

I think it would be convenient if your broker did the conversion.

And that’s what I would ask them if they’re able to do. Did you ask their customer service?

In Germany, most banks do automatically convert dividends to EUR - unless you open up an FX account and explicitly instruct them not to convert (only possible with some).

If they accept your CHF when they sell you the shares, why can’t they pay you dividend in CHF, too?

Clearly the only reason why anyone would buy the VWRL.CH is the currency convenience, or?

AFAIK, they fund company doesn’t accept CHF - they accept the fund’s currency. Even if the market makers may accept CHF.

And using buying in Switzerland isn’t just done because of currency - but also jurisdiction. And because trading on foreign exchanges is often much more expensive for many banks.

I’m just put off by how uncompetitive these rates are.

0.95% is well in line with most banks in Europe, I think.
IBKR’s rates are indeed very competitive - but they’re far from the norm for retail brokers.

The currency conversion cost with Wise for 20’000 USD is 0.49%, not sure about the additional cost at Postfinance. Instead of Wise the conversion could be also done at IB.

You could open a USD account at Postfinance which is free and do the exchange through wise.

Wait, wait… The main reason I opened an account at E-Trading was convenience. The secondary reason was to use the services of an established local bank. So your fix doesn’t fit to my plan. If I wanted the cheapest option, I would have kept sending money to IB.