Hi, can someone clarify the difference between Post-finance e-trading and Funds options ?
Are these 2 different Products / Services

On the other hand, the e-Trading option seems to be more similar to IB/Degiro, they also offer 500 trading credits if you sign up until May 31st, Not sure if that is equivalent to 500CHF in trading fees.

Without knowing much about the specifics of PostFinance‘s offers, I’d assume exchange-traded funds are only available in brokerage/e-Trading - though US ETFs (like VT) will most likely not be available at all.

VT looks to be available https://www.postfinance.ch/en/private/needs/adults/stock-market-prices.html

Yes, bought VT in USD in NY at Postfinance last week.
In the normal broker e-trading platform.
Funds are not ETFs for their fund offer ASFAIK, those are more expensive Postfinance funds.
The 500 trading credit is equivalent to 500 in trading fees (can’t be used to pay swiss exchange duties & other little taxes though).
The credit 500 is expires 31.12.2020 if not all used.

So unless you’re considered a professional trader, that should be an indicator that it’s still not illegal to be offered to Swiss retail customers - as has so often been discussed regarding IBKR.

I mean… if anyone, I’d expect PostFinance to restrict its availability in the Swiss market if it could not be offered legally.

Can we know how much you paid? X CHF trading, 10 chf tax, 3 chf ny stock exchange tax etc… I’m pretty sure the amount on moneyland.ch is wrong, or at least the simple table that postfinance shows isn’t enough (ex 50chf for 10000chf ETFs…)

Even if not the cheapest,PF presents the element of trust.
And let’s be honest, once you’re above a threshold of invested money, isn’t safety the most important aspect?
Would also like to see if @rolandinho you can share some more numbers.

And where did you get the USD? Can you exchange CHF to USD at PostFinance as easily and cheaply as at IB?

So let’s try to calculate the total cost of purchasing 30’000 USD worth of VT at PF:

Is PF a qualified intermediary? No problem with the W8BEN / DA-1?

I see TAX statements are pretty expensive at PF.
Does one need 1 Tax statement each year to file the Swiss tax report?

Is this right: the EU Withholding tax in SW is necessary if you pay tax in another EU country and helps you avoid double taxation between CH and other EU state, please correct me if I am wrong.

What about the declaration of EU interest in SW? what’s that for?
Thanks ! 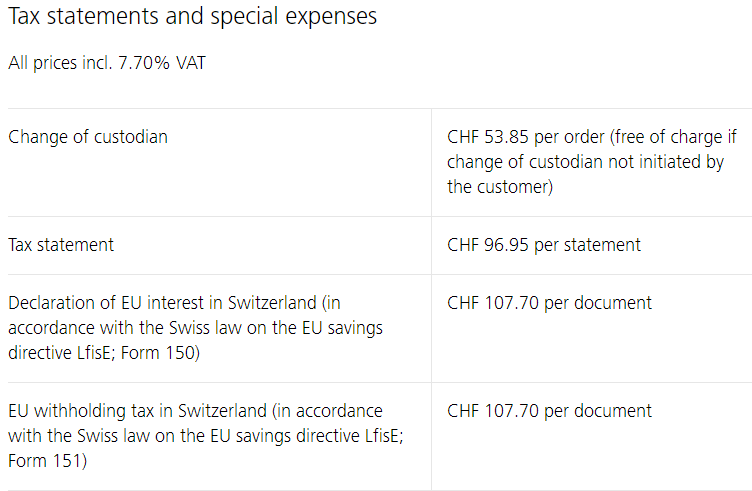 I’ll answer all when I next login to Postfin, let’s say by the weekend.

Does one need 1 Tax statement each year to file the Swiss tax report?

You don’t need it but it simplifies filing the tax return. Either you enter all your positions and dividends by hand or you just attach the report. Depending on how many lines you have it might be worth your time but by no means it is mandatory.

What about the declaration of EU interest in SW? what’s that for?

I cannot help you there because I honestly don’t know. What I know is that you can claim the part of the withholding tax that exceeds the amount stipulated but the DTA between Switzerland and the other countries. It is time-consuming as the tax rate is different in France, Germany, Spain…

Even if not the cheapest,PF presents the element of trust.
And let’s be honest, once you’re above a threshold of invested money, isn’t safety the most important aspect?

Agreed, but I believe in safety by diversification too, so I mix that with IB. For buy-and-hold I find Postfinance quite ok. As long as they don’t introduce a sneaky fee as a percentage of your holdings like most other Swiss brokers have.

And where did you get the USD? Can you exchange CHF to USD at PostFinance as easily and cheaply as at IB?
So let’s try to calculate the total cost of purchasing 30’000 USD worth of VT at PF:

I had the USD at a Swiss bank from selling stocks I had bought in times long gone where there was no other alternative to a Swiss bank/broker. So yes, originally I paid probably 1.5%, heck I think I paid CHF 1.50 + 1.5% per USD, but a long time ago.
So I didn’t, but you could exchange CHF to USD as easily as at IB, haha, I would say it is much easier at Postfinance than working out that I must buy CHF:USD or the other way round in TWS

I think for smallish amounts of a few thousand they take 1%, the percentage reduces the more you are exchanging. But it’s a lot compared to IB, yes.
Like I said, I am using Postfinance to diversify my brokers.
Postfinance is a system-relevant bank in Switzerland and so of course it is a qualified intermediary. I fill out DA-1 (not W8BEN) and get the 15% withheld by US credited to my tax bill, as is standard. The 15% the Swiss take is refunded by the tax man.

I see TAX statements are pretty expensive at PF.
Does one need 1 Tax statement each year to file the Swiss tax report?

The first time can be a bit daunting (maybe a friend can help), but filling out the tax declaration is easy. I don’t see a need for a tax statement from the bank. Filling it out yourself helps you understand it all better too.

Getting back European withholding tax I cannot comment out of personal experience I have just heard it is complicated and different for each country which sucks, if you have Siemens from Germany, Airbus from France & Unilever from Netherlands. My opinion is it requires dividends in at least high hundreds or low thousands per European country to make it worthwhile the extra costs and efforts. Don’t forget it is not the 26% of dividends for Germany that we are speaking of, but only the 10% that are significant for this “refund”.

So unless you’re considered a professional trader, …
I mean… if anyone, I’d expect PostFinance to restrict its availability in the Swiss market if it could not be offered legally.

And I agree with your conclusion.

You meant to say: for a non-Swiss domiciled asset

I think for smallish amounts of a few thousand they take 1%, the percentage reduces the more you are exchanging

1% is huge. I couldn’t find any fee table online. But can you say how it works? Do you have a USD money account and can exchange your CHF and put the USD there? Or is the exchange only made on the spot when you trade assets? If you wanted to exchange 50’000 CHF, how big would be the fee? Would be nice if you could compare it with IB or Revolut and say how many $ each of them would give you.

Here is the table 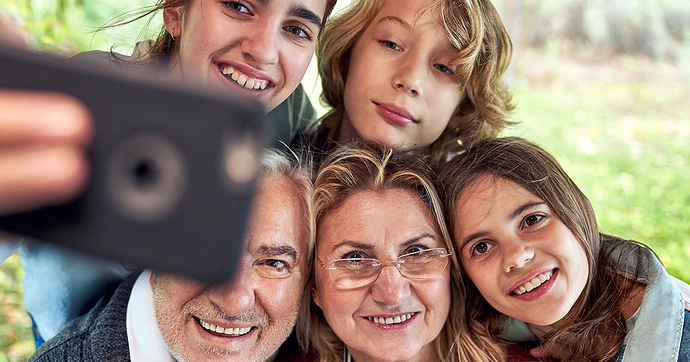 Brokerage fees and other charges

Brokerage fees and other charges are due whenever a security is bought or sold. The brokerage fee charged depends on the number of securities and the stock exchange.

I believe it should be cheaper to buy on IB and transfer to PF, as long as it’s just one or two etfs

Here is the table

This one I saw, I’m talking about currency exchanges fees and what kind of exchange rate is used.

Sending money to IB, exchanging, waiting until you’re allowed to withdraw it again (IB does not like when you use them as a currency exchange platform so you have to wait some days), sending back to PF. It seems like a lot of work. But yeah, the alternative would be to buy VWRL.CHF and miss out on withholding tax refund, which could be a lot of money.

This should be the interesting page. Transfer fees
https://www.interactivebrokers.com/en/index.php?f=14718

I don’t understand it though.

then this should clear it up a bit:

I might read it completely later.
From a fast skim I noticed the usual stuff that happens with banks… loads of info for inbounds , almost 0 for outbounds.

Regarding currency exchange at PF,
Maybe this will help: 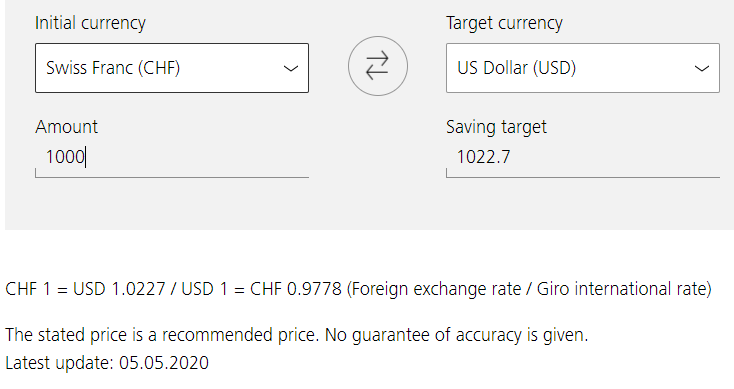 Seems to be almost 1% there.
I can’t find any fees on PF website