Info from the mod: this topic has been split from a different discussion, so it kind of starts without context

Actually nuclear power never made sense from a purely economical view if no nuclear arsenal is involved.

Nuclear power is just damn expensive once you have to decomission the plant.
As a process engineer I had the chance to get the hands on a report, where all the costs of the French civilian nuclear program, as well as future investments needed to maintain the power plants were listed (except military costs to maintain the right governments in place where the mining and transit of uranium takes place). Then you could divide production by this costs and found a substantial higher number than any other form of energy…

Reasons for why nuclear took such a big role in France (>70%) were mostly political, military, and self-interest.

Reasons for why nuclear took such a big role in France (>70%) were mostly political, military, and self-interest.

Scary but true… thanks for the detail.

Hypothetically, how the cost of plant decommission could be absorbed?

It should have been calculated into the price over the life cycle. Problem is:

In the end, this is the top reason why plants life is getting extended in most countries instead of decommissioning them, even if their official life time has been exceeded.

I have seen many smart people advocating for nuclear energy, maybe with Thorium reactors or not. But many people repeated that nuclear is clean and may be our only hope to fight climate change. But I think anybody who is now pushing for nuclear does not see the big picture. I think in 10 years it will be evident for everyone, the economic calculation will be clear: wind + solar + battery will be so much cheaper.

Problem is, that nuclear energy needs a huge initial investment to be set up and take resources away from the decentralized renewable sector. Also, grids will be adapted to centralized nuclear production, instead of decentralized one.

Second problem, the cleanliness is relative when you look at Uranium mines. The last one in France has been closed in the 80’s, and still families are getting evicted for soil pollution. Now in Niger (where >70% of French Uranium came from), the environmental and healt issues are even greater. Just the amount of soil and rock you have to displace is enormous. And I am not even talking about political implications (corruption, regime change etc. to get to the uranium and the ports necessary to export, since Niger is a landlocked country). BTW, Niger is second last or something on the Human Development Index, despite fueling French nuclear energy (and most of Western Europe actually…). This creeping corruption, coupled with the poverty is one of the main reasons for the rise of Islamic terror in the Subsaharian and Sahel region of Western Africa.

Truth is, that the technology for getting all renewable is already available. However, this will radically change how production, distribution and storage works. Companies are already preparing for that (splitting away the coal power plants as well as nuclear ones in different entities so they can easily get rid of it and leave it to the public fonds to deal with it). In the end, these highly profitable companies won’t pay up for the clean up, public funds will (which goes back to privatize profits, socialize losses).

Interesting. But nuclear was surely clear than coal/oil/gas. At least you didn’t need to burn that stuff. But it’s like preaching to the choir, I’m already convinced that it’s not the way.

Regarding socializing the losses: it’s a shame that a business can just split / reorganize / go bankrupt and you won’t find the money that they made over the years. If we allow the construct of a legal person, it should be more tightly tracked where the money goes. Entities that get involved into huge projects with huge potential environmental impact, should not be allowed to transfer out their profits and then just cease to exist once they’re no longer profitable. This is not the inherent fault of capitalism, but a missing responsibility structure. I am very much for highly taxing the damage to environment. No free ride for dirty businesses! The car industry (coming back to the topic) has been “selling” pollution for 100 years.

In France it is budgeted and calculated, and revised periodically. It is currently budgeted at ~ 1 Billion for each reactor (rapport 2016)

Another problem with nuclear and other big plant policy is that they are actually target for possible external threats. I don’t know how many hours and meeting and dedicated officials the Swiss Military have created to artificially prepare plans to protect our nuclear production plants. Millions of swiss francs in salaries, exercise, analysis, over 40 years.

With decentralized production, down to vehicle2grid and battery plants for quartiers/cities the grid is incredibly more robust and reliant, and we can stop wasting tax money in preparing defense plan for terrorist attack on the nuclear power plant (I’m not against the plans per se, but clearly a decentralized solution makes more sense from a safety and security perspective)

Yes and the report you linked clearly states that EDF (the French power company) has underevalued that costs by a large margin (Troisième partie, III, B). And ac

Furthermore, this report has a map with the age of all reactors. 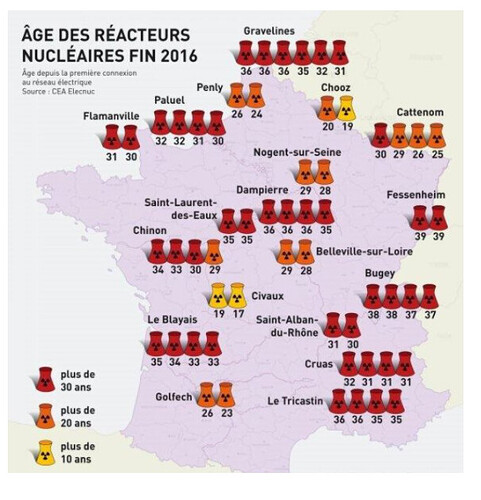 image605×628 95.1 KB
Showing how reactor age goes beyond design period (25-30y), and this is mostly to get the most money out of it before standing still.

Finally, EDF declares that the cost will be around 75 billion euros for the existing 69 reactors (which the report says is underevaluated), but has only provisioned 23.5 billions (Troisième partie, III, B, 2.)

I would like to add, that this is only a report, and that the responsible minister has quitted since his ideas of ecological transition were not in line with those of the president.

I think in 10 years it will be evident for everyone

I think you are a bit too optimistic about your timeline

Based on human nature and how our world is stuck with benefits chasing, I vote for something more like : 10 to 15 years to have “most of the people” convinced, another 10 to 15 years to allow things like regulation and politics to slowly change and adapt, and then another 10 years to implement durable change…
Maybe it would mean 30+ more years for your Tesla shares to go up

the responsible minister has quitted since his ideas of ecological transition were not in line with those of the president.

That the kind of things that help me make the assumption above. Political agenda’s are as volatile as crypto market sometimes. Big decisions can’t be made, or take a huge amount of time, only because politic system in some country can’t be done in the correct timeframe. Hard to start a 15-20 year project or reform when you are in office for 4, 5, max 10 years, and need to please everyone for the next 6 months only because of an upcoming election…
Swiss political system seems way more robust in that matter.

Maybe it would mean 30+ more years

I suggest you revise your pessimistic views: 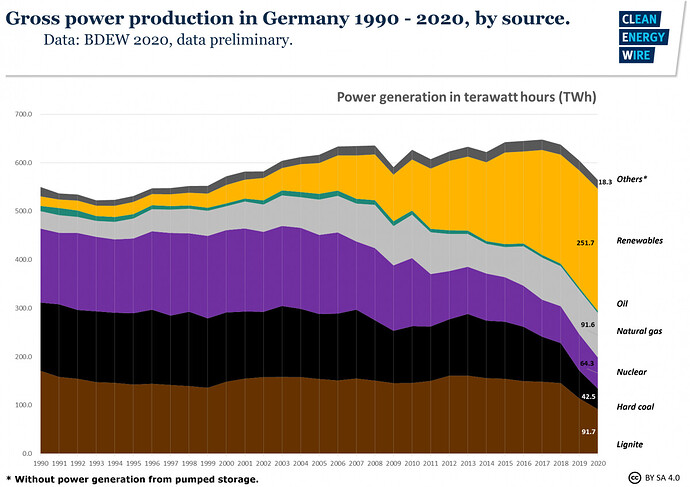 Interessting. Thanks for giving me back a little bit of hope in mankind

Do you know if this trend is shared worldwide? (maybe except China…) 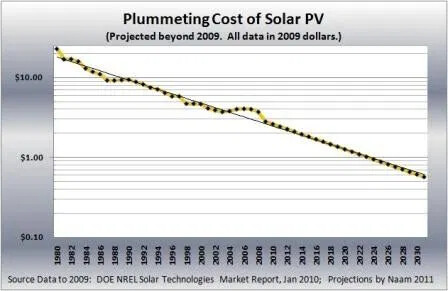 When prices drop so much then you can’t stay blind to it. You will mount these solar suckers to your roof at your own cost.

Well, graph with only projected data from 2009, after a plateau… I don’t necessarily disagree with your point, but this particular data is not totally relevant for your case IMO. And it’s just one component in the grand scheme of things…

This look less sexy than the German graph… : 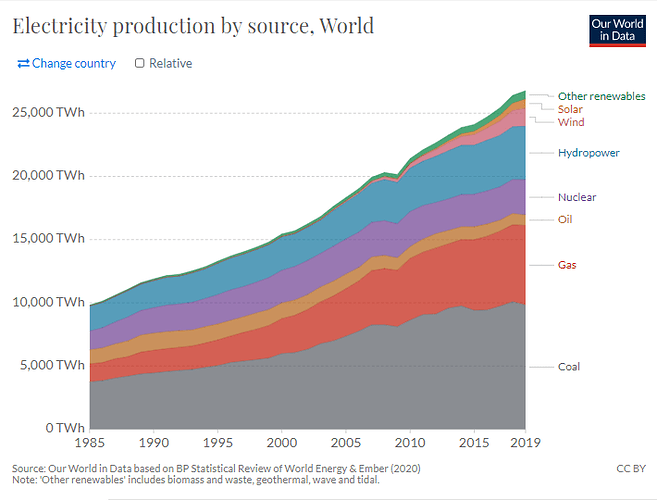 Edit : this one is scary… 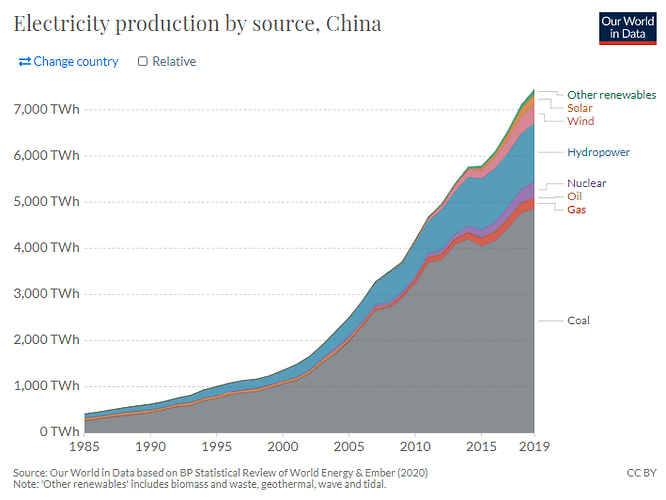 Edit 2 : definitely not a shift coming in the next 10 years in my opinion… : 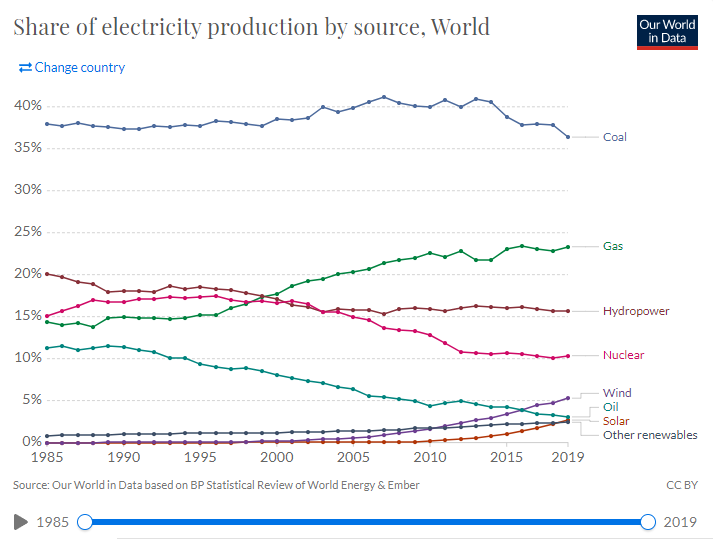 Very nice charts. I think the last one shows that wind and solar are really picking up and coal is definitely on the way down. I think we are at a tipping point. Solar is already economically attractive, but the battery storage is not there yet. This will change in the next 10 years.

Here some projections for the USA:

I don’t think it will look like that in 30 years. I’m pretty opimistic that fusion reactors will be around by then and change everything.

I’m pretty opimistic that fusion reactors will be around by then and change everything.

I’m actually undecided on renewable vs. nuclear. Though I think one potential pitfall of the fusion approach, is that it’s banking a lot on something that doesn’t exist, there’s a huge risk that people keep saying “but fusion will solve it” and in the meantime the climate emergency won’t solve itself and 20y later we might stay at the same point. (While at least some technologies do work now and are steadily improving)

Fusion reactors in 30 years is extremely optimistic. Hell ITER isn’t even finished yet. Not way we have any commercial fusion reactor running in 30 years, it is more end of the century bet. Just build more conventional nuclear fission reactor, we have plenty of fuel and there is innovative designs around the corner.

but has only provisioned 23.5 billions

Those are invested and planned to grow in value. All in all all those costs are a small fraction of the price of the electricity. It is not as big as an issue as the anti-nuclear want it to be.

So you disagree with everything that has been written above? I can imagine that in 2030 nobody will propose to build fission reactors anymore.

So you disagree with everything that has been written above? I can imagine that in 2030 nobody will propose to build fission reactors anymore.

Not really quite sure what specific point I am disagreeing with because there is many things that have been said.

But when it comes to CO2 production Germany has not accomplished very much. They mostly replaced their nuclear with renewables. This had more or less had no impact in term of CO2 production. They just accomplished very little with this lateral translation. And let’s not forget electricity is only a small fraction of the energy mix of such a country.

I still think nuclear has a future, the grid need a baseload unless we do find a cheap and efficient way to store massive amounts of energy. I have low hopes for this to become a reality in the next 30 years. So Germany is pretty much banking on burning fossile fuel for baseload.

For the french speaking this channel is excellent: https://www.youtube.com/c/LeRéveilleur/videos