This is a thread for the ones who collect and invest in NFTs, if there are any out here.

Sofar I have not really looked into NFT’s but this Swiss poststemp NFT really took my attention. Going to look into it. Thanks for the links.

I really don’t understand the point of NFTs.

E.g. with the Stamp, what do I gain from it? It just seems like a digital receipt instead of a valuable asset.

It can’t even work as a certificate of authenticy since there is nothing that links the NFT to the physical stamp. I could just create a copy of the stamp, and sell it to someone along with the NFT.

Basically proving that I own the NFT doesn’t enforce any meaningful contract that would be of value to me. All I get is knowing that I “own” the digital picture that I’m looking it. I don’t have any other benefit compared to other people that don’t own the NFT.

It’s like owning a stamp that is in a museum vault and that you can never see or touch in person.

I could just create a copy of the stamp, and sell it to someone along with the NFT.

Whats the point for example in owning the original Mona Lisa Painting?

I cannot resist reposting this: 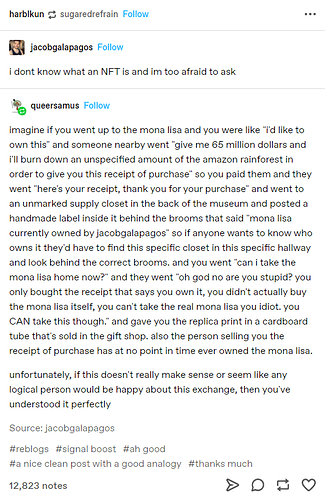 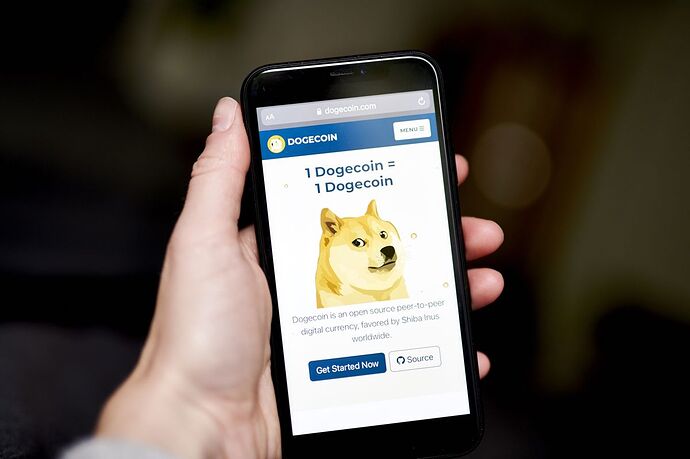 edit: I think that’s not the only way, there was another one recently where people assigned ownership at “random” so you get the right of being the owner for 1 day with some >0 probability.

But with the NFT you have proof of owning the original minted digital asset.

But in that case the buyer that I scammed wouldn’t own the actual real stamp. So the digital counterpart didn’t really help anything.

And since it didn’t help, it also didn’t provide any value to the buyer. I can always look at the digital stamp anyway, without owning it on the blockchain.

The only value is has is speculation that I could maybe sell that to someone, that would also like to speculate. Nobody would buy the NFT just because they actually like the imagine, because you can just see the image anyway without having to buy it. (At best it’s seen as a donation to the artist…)

How does owning the NFT give me anything more than not owning it? I absolutely don’t see it.

Whats the point for example in owning the original Mona Lisa Painting?

An NFT is not the same. It’s like paying to have your name in some register as proof that you own the Mona Lisa, but you actually must always leave it in the Louvre for display to the public.

That doesn’t give you any value, expect maybe bragging rights… But I guess that bragging is also worth nothing for random digital artworks.

If you gifted me an NFT absolutely 0.0 would change in my life. I can’t do anything more, except sell it. This sounds a bit like Gold ETCs, but there I could theoretically go to the issuer and redeem it for phyisical gold and eat it if I wanted.

Another view (from my point) is to see them as “digital collectibles”.
Not claiming it necessarily serves a real-life “purpose”, other than a form of bragging rights in a certain community…
Like when kids traded physical Pokemon cards (although in this case unique I suppose), or gamers exchanging items in video games.

I also see them as collectibles. It’s important to say tho that NFTs is a big world and there are many “usecases”. I.e. there is even a horce racing game where you own a horse (=nft) and participate in horse races

I must say that I am skeptical but a couple of things I heard on NFTs.

People may buy and bring NFT physically with them. Perhaps a necklace or bracelet with attached the NFT in a USB stick. One step forward, the stick is aesthetically nicer and by pressing a bottom you can project the NTF. One step forward, you project an hologram of the NFT. You basically show up with your friends about your NFT.

Another use. You bring your NTF in your metaverse. FB may want to develop this shopping metaverse and getting a commission on transactions. Therefore it will incentivize the use of NFTs in its metaverse.

Does it sound crazy to you? 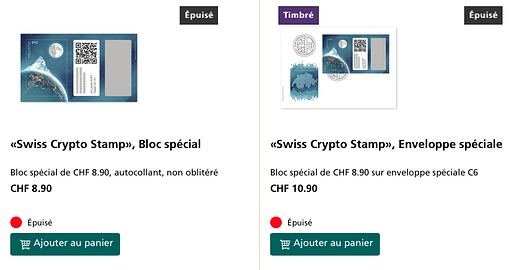 It was sold out yesterday at 10am already. I also got 5, then got hesitant if it makes sense to buy more, and… GONE

I think one was limited to 5 unities online… I also checked some physical shops, and same. Sold-out. Probably some remote shops still have a couple, but I’m not surprised at all.

I think one was limited to 5 unities online…

I could have use my company account as well to get more. Also, if you register with a different e-mail address, this would count as a new account. Anyway, too late now.

There are already some sales on opensea from this NFT. One of the Piz Bernina NFT’s got sold for ~120$.

Not only on opensea…

Got 2, but because the website was lagging as hell I get charged 3 times… will see how it goes. I don’t expect to make any money off of it anyway…