Is the price of market capped index proportional to market cap?

VXUS costs $40, at inception it cost $50. Are World companies (ex-USA) worth 80% of what they did 9 years ago? You tell me. Seems super weird to me. And of course, USD had some inflation, so it would put the valuation even lower. We could be probably below the year 2000. Stock market is really bonkers…

What are the numbers if you look at total return instead?

What are the numbers if you look at total return instead?

It depends what kind of questions you’re trying to answer. If you want to know the return, you check total return, but if you want to compare the value between two points in history, you rather go for the price index. I mean, look: the companies pay out dividends, this money leaves these companies and the investors do with it what they please. I’m not saying that investing in VXUS 9 years ago didn’t bring any return. I’m saying that all the international stock market (exUS), according do the price, is worth less than 9 years ago, or maybe even 20 years.

Let me post the ACWI ex US chart again. It shows something like 150 for the end of february. Right now we’re probably somewhere at 120. That’s the level we had in 1999. How can it be that investors value the companies at the same level as 21 years ago? With all the technological advancements that happened. Has USA stock market sucked out all returns from the World? 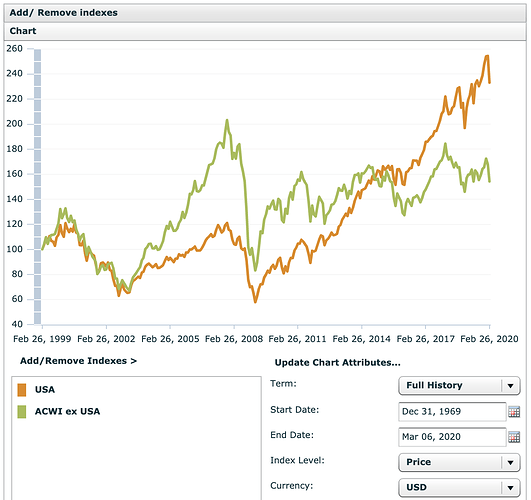 If you want to know the return, you check total return, but if you want to compare the value between two points in history, you rather go for the price index.

So you’re saying the price of an index is not proportional to the market cap that it’s following? Interesting, let’s see.

The total return in both cases will remain at 0%, yes.

is that correct? market cap doesn’t change on buyback right? (stock price gets higher to compensate)

I specifically googled it to make sure. Took me way longer than I intended. What they say is: theoretically, the company it $2’000’000 lighter in cash, so the market cap should drop by this much. In practice, it really depends how the market reacts. It can happen that the share price will rise.

Think about it this way: stock buyback is the opposite of stock issue. If company issues and sells stock, it raises additional capital, which raises its market cap. Right? So buyback has to have opposite effect.

Hmm, I’m still not sure about it

I’d assume raising capital would not change the market cap, or if it does it’s because of better long term prospect, not because of the dilution.

One of the first link in google: https://finance.zacks.com/happens-share-price-new-shares-issued-7922.html

Seems to support it (the dilution itself doesn’t change market cap, but it might signal the market about its long term prospect, as they mention it could go in either direction depending the company and its history).

To go back to the original discussion, I still think for investors total return makes more sense as a comparison. Dividends are like buybacks where you can pick where you reinvest (so can reinvest equally among the market instead of a specific company).

I’d assume raising capital would not change the market cap

Well, look: if you merge two companies, of course their market cap will sum. If you raise capital, you have extra money, that belongs to the company, so of course it has to raise the market cap.

To go back to the original discussion, I still think for investors total return makes more sense as a comparison.

I think not. What we care about comparing is the total market cap. The question I was asking was: what was the total dollar value of all stock market ex US in 2000, and what is it now? I assumed you can take index price as a reference.

I can help here with buy backs, as i often check that the companies i invest in are using their cash correctly, and buybacks is part of this check.

Let’s imagine that a company, Acme Corp has 100k in assets, and 50k in liabilities. The equity (book value) is thus 50k.

Let’s assume, for the sake of the example, that the value of the company is equal to its book value.
Let’s also assume that there are 100k shares outstanding. The value of one share is thus worth 0.5 CHF.

During this year let’s say that the company earned 5k CHF.
Total assets are now 105k CHF, total liabilities are still 50k, so the equity is worth 55k and a share is worth 0.55 CHF. The “market cap” would thus be 55k CHF.

Now the management wants to use these 5k CHF of earnings to buy back shares of the company. There are three cases, depending on the price the shares are trading at. What is important to know is that when a share is bought back by a company, it is cancelled and does not exist anymore.

Thus, we should only cheer management if they buy back shares at or below fair value. Doing buy backs to bid up the price without any regard to value is likely to end up in the 3rd case. However, having a management who understands correctly buy backs (and does not do them because “everybody else is doing it”) adds tremendous value. An example would be the story of Henry Singleton, CEO of Teledyne. He bought back 90% of the outstanding shares when the market was undervaluing them.

As for the original question (i.e do buybacks influence the market cap?) it is not clear cut, because on the one hand the number of shares decreases, but on the other hand the value of a share fluctuate depending on which case applies. Let’s say that if the buybacks are done at fair value, then the market cap should stay constant over time and never increase (the market cap will stagnate but the value of the shares will increase).

Thus, we should only cheer management if they buy back shares at or below fair value.

While this is all mathematically correct, the problem with your line of thinking is that fair value is hard to impossible to calculate with the precision you want, except in simplest cases (like holding company of liquid and easily valued assets or a fund). Fair in the eye of the beholder, one man’s fair is another man’s overpriced and the market is only a very rough gauge here.

Is the price of market capped index proportional to market cap?

Most indexes use float-adjusted market cap, but that shouldn’t be make a significant difference except for certain companies.

And you really should look at total return instead of price index, it makes no sense to ignore dividends.

you really should look at total return instead of price index, it makes no sense to ignore dividends

How many times should I repeat? I’m not looking to count the return from 2000 to 2020, I want to compare the stock market size in 2000 with 2020. If I asked you to compare the perceived condition of Apple in 2000 and 2020, would you look at total return in that time? No, you would compare the market cap, right? So my question is: can you take price of VT, VTI or VXUS and treat it as proportional to the market cap?

Repeat as much as you want, it’s still idiotic to ignore dividends.

From a perspective of how much the companies are worth if bought outright, market cap is only a rough gauge. You want Enterprise Value instead. Unfortunately it’s not easily available online at index level if you don’t have bloomberg terminal subscription or similar at hand. EV make a huge difference for capital intensive companies that need to borrow a lot and that are more prevalent in europe, e.g. https://finance.yahoo.com/quote/VOW.DE/key-statistics?p=VOW.DE

Tech, which dominates S&P500 on the other hand is relatively asset light and doesn’t borrow much

Repeat as much as you want, it’s still idiotic to ignore dividends.

Ok then let me lay it out for you, so maybe you will not find it that idiotic. You bought a flat in 2000. I ask you how much it was worth then and how much is it worth now, how much the value has changed. Will you calculate the rent that you got paid within this period? Now that’s idiotic to me, don’t you think? I’m trying to tell you that I want to compare the stock market size between then and now. If you think such a comparison makes no sense, then please provide arguments. But don’t tell me I should use the total return index to calculate it, it doesn’t make sense.

Yes! Rent (or saving you get from not having to rent from someone else if you live in the apartment yourself) is a very important part of real estate investment. Basically, barring some market distortions, real estate is only useful as far as what profit you can derive from it. If all you want is just raw land, you can have it for practically free in certain parts of the world today, it is not that valuable on its own. Or certain types of it (forest, etc) in more desirable parts of the world you can get for what might seems like a bargain price until you realize you can’t build apartment buildings in there and noone wants to live on your land and pay you sky high rent for it.

But a price of real estate already has potential future rent yield priced in. And a market cap says something about the condition of the stock market as a whole. If total market cap of exUS now is not much higher today than it was 20 years ago, then it’s a bit weird, IMO. Counter-intuitive for sure.

Rent (or saving you get from not having to rent from someone else if you live in the apartment yourself) is a very important part of real estate investment. Basically, barring some market distortions, real estate is only useful as far as what profit you can derive from it.

Yes, but it’s all about future return. It does not matter how the past looked like. Example: I have an asset (say a house) with income (rent) of 1k/year. We can set a value for that asset. However, it does not matter how much rent was paid in the years before. If rent income in the past was 10k instead of the current 1k this will maybe make a sad impression because income dropped, but our valuation of the house should not be affected by it, as we still exclusively look at what will be produced in the future.

And a market cap says something about the condition of the stock market as a whole.

Exactly. Market Cap = current expectation of all future earnings + current assets. It is correct to compare without taking total return into account.