Europe has high inflation, is probably in a recession that might go on for a long time, has no idea how to solve it’s energy problems, has very expensive social systems and huge debt it will never be able to pay back, an overaged and shrinking population. The future will be created elsewhere, probably India, South East Asia and Africa. I don’t think we matter much anymore, we are only a historic theme park for rich asian tourists

Reading at your previous answers (and this one), I understand that as a crypto enthousiast nothing and no one will change your mind or your give a fresh perspective on crypto.

You’re simply serving the “arguments” we can find on crypto websites.

Have fun in Wonderland

Have fun in Wonderland

No, sorry Guillaume that’s not what I mean, I am interested in a discussion I want to challenge my own bias. I understand the argument that we here in Switzerland do not necessarily need Bitcoin or any other cryptocurrency and I agree, at least for the moment. Bitcoin uses a crazy amount of energy, transactions are slow and it’s difficult to use, that’s all correct, but I still think it has value, even here in pretty little CH.
I think we live in a very interesting time, the world that we know is changeing. Will Bitcoin still have value in 10 years? I think yes but maybe I am wrong. But I see an old system in decline, the almighty swiss banks have become irrelevant after 2008 and maybe something new and exciting is on the horizon…
And maybe it’s a tool for a better and fairer world for all of us.

Mass adoption or not, I maintain that until Bitcoin is in circulation for basic or common services and recognized as a « real currency », it remains, like gold, a highly volatile « safe haven ».

Unlike gold, which is a tangible asset, Bitcoin is extremely abstract for a large part of the population. As long as the population is not educated about its usefulness, its potential, its use, Bitcoin will remain a speculative asset (my opinion; crypto enthusiast but not Bitcoin owner).

What’s the genuine use case for bitcoin?

2022-2023+ is a massive advertising for bitcoin, just pick your play. Governments missallocation of capital, inflation, war, strikes… We need to separate money and government more than ever.

Sounds like gold or Western Union would’ve worked too

Do you know how much gold weight or WU charges??? That does not work…

That would be a fork, just as it has happened in the past. There are plenty of forks without taproot.

You will immediately lose the value of Bitcoin (that you fail to see), this is about decentralization, censorship resistance, and overall, to remove the government from your wallet

isn’t possible to do trustless

Again, that’s the whole point, sovereign individuals, no third party. The trust is in the immutable protocol and the proof of work

You don’t need to do that… Most likely in the future you won’t even need to setup a channel at all, your “wallet” will be sufficient

What’s the expected real interest rate on Bitcoin that you envision? What economic activity funds it?

No need for that, it is a deflationary by nature

You don’t need internet to use btc, check some videos from South Africa for examples

These are really people too… And with real use cases

And maybe it’s a tool for a better and fairer world for all of us.

How about we start blowing the energy consumption of whole mid-sized countries for a virtual currency that is accepted everywhere …well, nowhere really, except in El Salvador.

2022-2023+ is a massive advertising for bitcoin, just pick your play. Governments missallocation of capital, inflation

Money and inflation?
You‘ve got to be kidding me!

The price of Bitcoin in USD is down more than 70% over the last 12 months - a period that was inflationary for the USD. As a proof-of-work scheme, it is mostly mined using energy from fossil fuels. The prices of which have risen even more than average CPI inflation. So in theory, prices of BTC should have gone up even more.

We are seeing high inflation rates that we haven’t seen in decades in most of the developed world.
At the same time, the value of Bitcoin has tanked.

It‘s been a huge slap in the face of the idea that’s so prominent in crypto circles: that Bitcoin would be a good hedge against inflation or international tension.

6.2% inflation in the US in October, a +0.9% increase vs September which was already +0.4% (so more than double). If you are into fire this is a disaster in the making.

Good luck everyone, I am sure the skeptics will soon learn about sound money, aka bitcoin

You can add many European countries to that list in 2022.

Consider the downsides of BTC. Since the objective is to avoid government regulation you either need to keep BTC off grid which means you have similar problems as the Vikings who buried their wealth in the ground: good luck asking the police in Venezuela or even Switzerland to get your BTC keys back after your family is house jacked. No bank guarantee scheme …

Or you need to trust an unregulated exchange, like FTx.

Not saying it is the case for you but I think a lot of people investing in crypto are not aware of the history of money and why banks were invented by the Italians in the middle ages and that people made the transition from gold in the ground for very good reason.

It‘s been a huge slap in the face of the idea that’s so prominent in crypto circles: that Bitcoin would be a good hedge against inflation or international tension.

That’s only because you have very short time preference…

And you are missing the point on inflation, which is directly created by governments and their inefficiency. The goal is to take governments out of my wallet with a protocol that is set and predictable.

The goal is to take governments out of my wallet with a protocol that is set and predictable.

How is bitcoin predictable? The technology is but the swing in prices is far from predictable.

We heard everything on bitcoin: hedge against inflation, the new gold etc.

Bitcoin monetary policy is extremely predictable because it is hardwired in its code by mathematic and physics.

Completely different from gold (we don’t know the supply) or fiat (can change anytime). That’s why we want bitcoin, to remove uncertainty and inefficiency from governments.

Completely different from gold (we don’t know the supply) or fiat (can change anytime). That’s why we want bitcoin, to remove uncertainty and inefficiency from governments.

Always the same selling points from the pro bitcoins. Don’t tell me bitcoin has no inefficiency

Can you share a graph ? would be interesting to see it

That’s only because you have very short time preference…

Inflation rising, you were “sure the skeptics will soon learn about sound money, aka bitcoin” a year ago.

So how soon is soon?

How about, for a “change”, you address the elephant in the room?

Why has Bitcoin been one of the worst performing assets during the rise of inflation?

And no, the answer that I or other are just short-sighted detractors with “short time preference” doesn’t cut it. I’m not saying that inflation hedges can’t be volatile and that their price always has to be correlated with inflation. But Inflation hedges don’t manifest themselves in being one of the worst asset classes during rapidly rising inflation - a worse asset class than bonds, equity and cash and real estate.

Even if they do overperform other asset classes over the longer term, even if Bitcoin were to “magically” emerge as a higher-performing asset class over the long term - in, say, 5 years - that doesn’t “prove” it’s good inflation hedge of any sorts.

If there isn’t at least reasonable coincidence in time between rising inflation and relative stability or increase of an asset’s price over at least the medium term, it fails the purpose and definition of an “inflation hedge”.

One could argue that BTC’s price appreciation was much larger than practically all other major assets (stocks, bonds, real estate) during QE in 2020. Increase in M2 money supply can be considered as the true originator of inflation, while it takes some time for the effect to trickle down into consumer goods.

In tightening conditions as we’re currently in BTC and alll other risk assets perform poorly. This might change in the future when BTC is not grouped together with risk assets, such as tech stocks, etc.

Increase in M2 money supply can be considered as the true originator of inflation,

how about the return to “normality” after the pandemic, I thought that was a leading cause of inflation

when BTC is not grouped together with risk assets, such as tech stocks,

Funny how this sentence makes BTC sound not risky compared to tech stocks.

If inflation was 40% I would possibly use it.

So perhaps it is a potential hedge against hyperinflation (as opposed to inflation - I would not make the change for 10% inflation).

Even the silly rainbow chart is broken now with prices lower than last cycle (with regards to the mining rewards halvening). 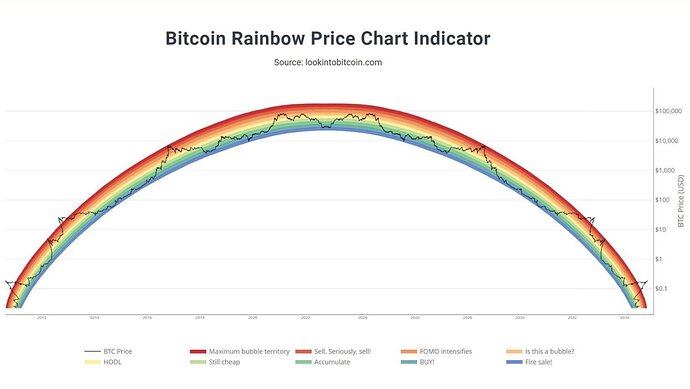 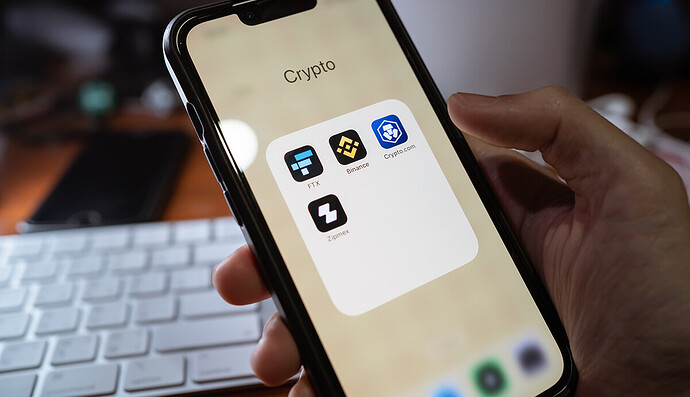 How Do Cryptocurrencies Correlate with Traditional Asset Classes?

The crypto market’s recent gyrations necessitate a fresh look at the evolving relationships between crypto and traditional asset classes. 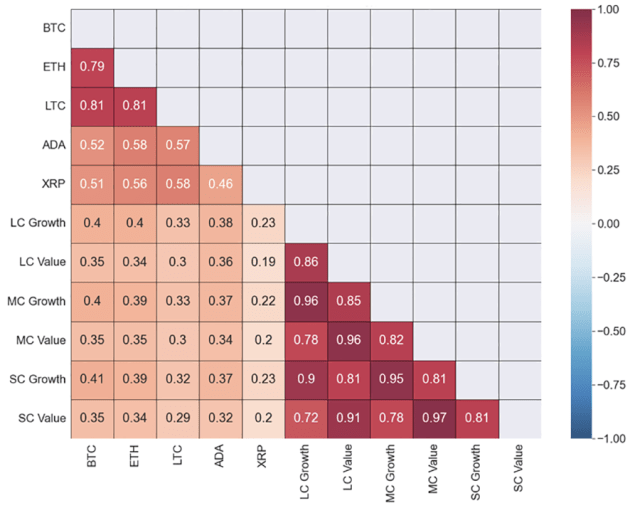 Yeahyeah, I know, I know bitcoin is a scam and technical analysis is just astrology, BUT:
Downward tiangle broke to the upside and price didn’t react despite massive negative news. Too early to celebrate but this actually might be the bottom 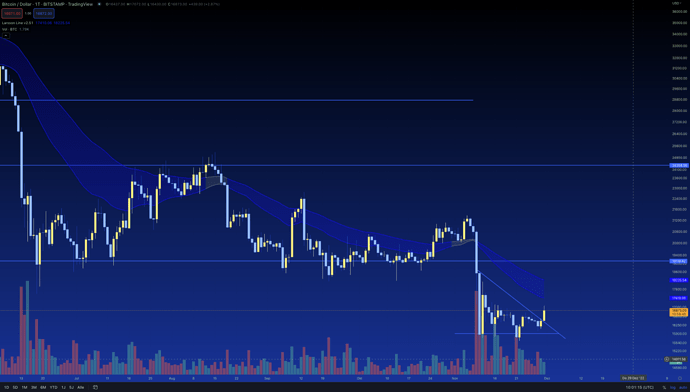