I find this interesting. Why do the whites prefer Trump and blacks overwhelmingly vote Biden? (these stats are just for one state, but in many states it’s the same picture)

I don’t know where you got informed about BLM, but maybe consider expanding your sources. Do you know why people are protesting? (did you try to understand them?)

Tell me how does systemic racist manifest itself in USA?

Do you think 300+ years of state enforced racism and oppression disappears overnight? Even if it did, do you think those people would be on an equal footing, esp. in a place like the US?

If for many centuries, we say everyone related to Bojack can be enslaved/lack rights/can’t do certain jobs/has a harder access to education. And then after many generations, you get equal rights.

As you can imagine, you’ll have a much harder time because on average most of your people will be poorer, live in neighboorhoods with less opportunities, and the rest of the society will still have lots of biases against you that you’ll have to overcome everyday.

Sure some of you will do well, but on average it will be much harder than for other people (if you’re in a poor family you’ll probably have to start working as a teenager, won’t have as much access to higher level education, etc.).
And with the public education system in the US that’s probably much harder, I can imagine a country with a strong public school system, and good/free education (e.g. most of Europe), where the gap might be able to close faster, but the US isn’t like that.

Edit: and I didn’t even start talking about how we’d still have some people celebrating their “heroes” who’s only fame is fighting to keep Bojack people enslaved (in addition to being traitors to the country).

Biden is ahead in Nevada, with only Democratic-leaning late postal ballots left to tally. But by state law, ballots postmarked on election day can be counted as long as they are received by 5pm on 10 November, which means counting in the state could continue through the weekend.

The race is extremely tight in Georgia. The latest tally has the race separated by around just 600 votes, with further tranches of ballots from Biden-leaning precincts expected before long.

There are about 200,000 ballots left to count in Pennsylvania, where Biden is trailing by just over 18,000 votes. He’s been winning the mail-in ballot counts by huge margins, and could very well take the state. Pennsylvania officials say they expect most votes will be counted by Friday.

You could spare me the sarcasm. We know how Trump was at odds with Mexicans, wanting to build the wall etc, yet among Hispanics the disparity was around 60:40, not 90:10. 90:10 is just huge. (or UUge, as some would say

I don’t know where you got informed about BLM, but maybe consider expanding your sources

I admit that the coverage I received was mostly one-sided. I’m aware of the racial inequality in the US. I’m just not sure if the democrats are proposing the right measures to solve that problem. For example, one proposal in response to police brutality was to defund the police, which would mostly hit the crime-struck poor neighborhoods.

Anyway, I feel like I know too little about this subject so I don’t want to get further into this discussion. 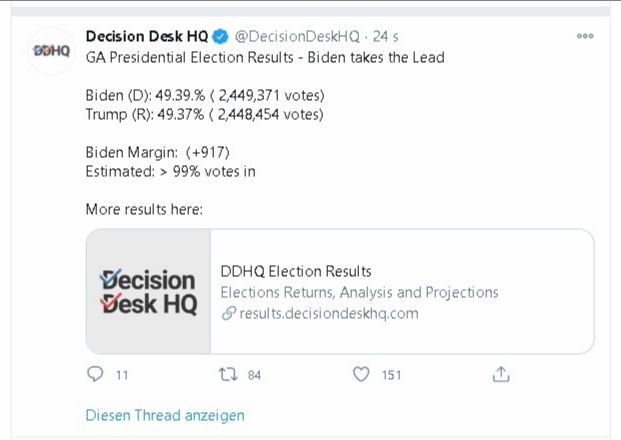 Can’t wait to see the final meltdown video from Trump.

So here it is, the most pathetic and miserable speech to date by the (still) most powerful man in the world

I was watching it live yesterday and it was tremendously sad. Several channels like MSNBC cut in the middle and corrected his statements. I also checked the aftermath on Fox where the commentators and anchors said there needs to be evidence for such bold claims. There was very little support (if any) for him even on Trump’s favourite channel.

Market reaction? Who knows, the futures are down again this morning.

Is Melanie already preparing the dicorce?

I have the following theory why Republicans are going crazy:

It’s mostly not about Trump. Going in 2024 with one of their candidate looks more appealing after 4 years of Biden than 4 years of Trump.
What they are really worried about is losing control of the Senate and House for the next 2 years, which would allow Biden to pass much more legislation.
The Senate majority still looks promising for Republicans but it has also grown tighter. Jumping on the fraud-bandwagon and subsequent litigation makes it more likely that they keep control of the Senate.

Remember how everyone just rolled their eyes when Trump claimed in 2016 that he would have won the popular vote if it weren’t for fraud?

This is a reminder to me that we should take what politicians say very seriously. 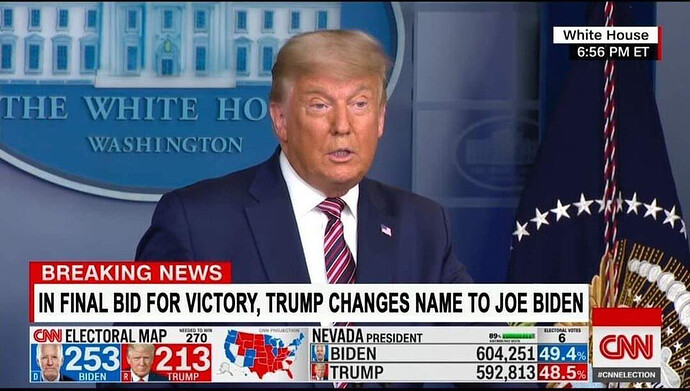 What they are really worried about is losing control of the Senate and House for the next 2 years, which would allow Biden to pass much more legislation.

It’s fairly unlikely so far they’ll lose control of senate (there’s been apparently quite a few folks voting Biden but republican down ballot). Numbers for senate race in Georgia and North Carolina have been still pointing at a republican win.

(and the Georgian runoff is unlikely to turn dem, I don’t think it will have a huge turnout so it would be much harder to turn than the regular seat which probably won’t turn already).

thinking of Hispanics as monolith is simply lazy thinking.
all ‘east europeans’ don’t think alike! Nor do all ex-yugoslavians, nor all hispanics !

You depreciate the first hand experience these people have with real socialism.

thinking of Hispanics as monolith is simply lazy thinking

Fair enough, although latinos have to be the majority of hispanics. How about blacks? Are they more of a monolith and why? 90% agreement is really profound. it’s the kind of number only communist leaders see in their faked elections

How about blacks? Are they more of a monolith and why?

Maybe because african americans are mostly not recent immigrants and have a much longer shared experience (centuries).

I think hispanics includes a lot of more recent immigrations from a variety of countries/background. It’s like 20th century european immigration, I’m fairly sure italian and irish immigrants wouldn’t vote in the same way, tho they’re all from europe.

How about blacks? Are they more of a monolith and why? 90% agreement is really profound.

Black Americans living in different states of USA have lived through situations (laws, slavery, poverty, lack of civil rights, access to good education) that are more similar to each other than latinos/hispanics from different counties/ political systems. Would you agree on that?

In the same breath, you could also ask - are ‘white farmers and rural folk’ more of a monolith or likely to vote for 1 party than some other parts of populations? Maybe they share common experiences of social & economic highs and lows.

Still, there are rich & poor people among them, entrepreneurs & unemployed. Yet they all don’t want to vote republican, save for a few exceptions.

Looking at your link (great stuff), the most telling demographic traits (5%+ share, 60%+ lean):

Easily the most prominent demographic trait to determine voting preference is belonging to the black race. By the way, notice how Biden attracts voters of certain demographical traits, but Trumps voters are more spread out.

You could spare me the sarcasm. We know how Trump was at odds with Mexicans, wanting to build the wall etc, yet among Hispanics the disparity was around 60:40, not 90:10. 90:10 is just huge. (or UUge, as some would say

Could I? Because after these last 4 years (and you can go back further) you are here genuinely surprised asking with a straight face why would african american people not vote for Trump? Or the GOP? I feel a little bit of sarcasm is justified, no offense.

I’m actually quite shocked that there’s 10% of black people that vote for a white supremacist.

It seems to me you do mean offense, but whatever. If it isn’t clear to you, I understand why blacks generally favor Biden over Trump, but 90:10 is just big, don’t know how big it was in 2016, but this could have cost him the reelection.