Buying stroller here vs in Germany? VAT and customs question

Hey everybody, so I’ve never bought anything that expensive outside of the country, and I’m wondering if it even makes sense.

The stroller we’re looking at here (new, I’m looking at used too) is 1200 CHF (at least) and about 1200 euro in germany. VAT is obviously much less in germany, so I’d figure it’ll be 10% cheaper there. But I have to pay customs too above 300 francs right, which according to QuickZoll app comes out to about 95 francs. So all in all it’ll maybe be 50 francs difference.

What am I calculating wrong? Does it make sense to buy these things outside the country? Has anybody ever done that?

so when you import this kind of goods, there is no customs, but only VAT due in Switzerland. These are two different kind of fees. VAT is always due as soon as the value of the goods exceed a certain threshhold (300 CHF/pers as you stated, on the total amount of goods important, and one ticket items cannot be shared over different persons)

So basically you go to the Germans and say you want to have the VAT back (19% of the net price, so in your case around 192 EUR). Then you have to convert the net price (1008 EUR) into CHF (1029.11). Then you go to the Swiss authorities to declare the import and pay the Swiss VAT (7.7%, so 79.24 CHF). In the end, you pay around 1108.24 CHF, the difference being the VAT. so you save around 92 CHF. If you get delivered, you will have to add costs for DHL/UPS/Post making the import declaration for you and prepaying the VAT bill (around 20 CHF, depending on the value of the goods).

Custom duties are mostly not appliable for private imports (cars, alcohol and tobacco being notable exceptions).

Or look for 2nd hand ones, there’s quite a market here

Or look for 2nd hand ones, there’s quite a market here

And sometimes they are really really cheap, like lots of people are just happy to give the stuff to someone who uses it.

VAT is obviously much less in germany,

I’m curious about this, isn’t exactly the other way around? Germany 19%, Switzerland 7.7%? was this a typo?
anyhow just buy used. Stroller gets dirty in no time - is pointless to start with a shining new one, unless you have precise measurement requirements (eg to fit in a specific elevator or car trunk) and need a specific model

Did you check https://toppreise.ch for it? tutti.ch very likely has the same model used. I personally regret having gotten so many baby things new instead of saving big time by buying used.

Was this a typo?

Was this a typo?

I second the recommendation of a used stroller
We got a high-end stroller (Joolz, Ferrari feeling when pushing it) for CHF 350 on tutti. I am so glad we did not shell out more because it got some bruises in no time and after little more than a year we switched to an umbrella stroller for convenience. I would recommend spending as little as possible for items for the baby’s first year as you will use the stuff for only such a short time. I did enjoy needing only one hand to steer the stroller, though. And many of the alternatives had really low handles. But it’s even better to use the money saved on item for a cleaner, in my opinion. That was/is such a lifesaver!

I would recommend spending as little as possible for items for the baby’s first year as you will use the stuff for only such a short time.

Also they often hate certain items for no reason at all, so you might be left with an expensive item that the child does not use / does not like (and you dont know why).

Reminds me of this 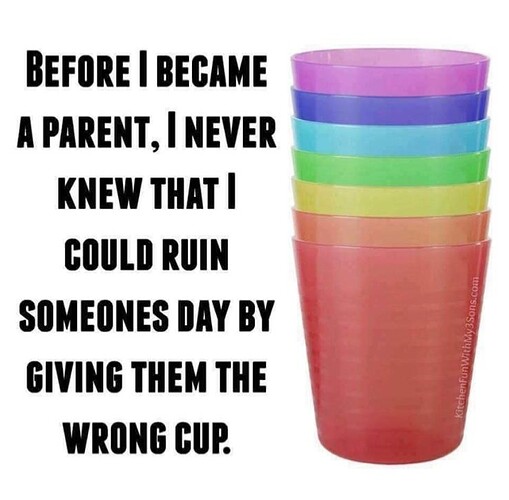 As a father of 5, I second the notion of buying used. There are plenty of parents who go all out and spend thousands on high-quality baby items, and then sell them for a song after a year. What’s more, if you buy at second-hand prices, you can often get back nearly the same amount when you sell it third-hand.

Buying in Germany is only really practical for purchases under CHF 300 (since you don’t have to declare), or for (really) big-ticket purchases where paying the lower Swiss VAT saves you enough to make the hassle worth it.

is worth noting that “used” in Switzerland quite often, but not always, means “it’s basically new, but people already wants to get rid of it”. I’ve bought stuff for kids that was basically indistinguishable from new products, and wondered if people just buy things “because they can” without actually using them.

Buying in Germany is only really practical for purchases under CHF 300 (since you don’t have to declare), or for (really) big-ticket purchases where paying the lower Swiss VAT saves you enough to make the hassle worth it.

I wouldn’t call customs declaration a hassle (anymore), if importing for personal use.

I happen to have just tried the customs’ QuickZoll smartphone app and it’s an absolute breeze.
You literally just declare:

That’s all, to get a 2 hr window to cross the border.
No registration required, no stopping at the border.
It’s almost painfully easy for a government service.

PS: I also think there’s often a third good reason why buying from the EU/Germany is worth it: Even without the tax advantage, net prices are often considerably cheaper. This is true in both smaller and “bigger-ticket” items (though maybe not as much in the OP’s stroller example).

Recent cases in point for me:

Can some one explain me why we even have this anymore? inside the EU there seems to be no customs tariffs whatsoever… What is the advantage for us consumers except for being forced to pay overpriced swiss profit margins?

inside the EU there seems to be no customs tariffs whatsoever

As a retail customer, you don’t “have” them either (with very few exceptions, see above, and vehicles). You can import pretty much anything you want on your personal travels / shopping abroad free of customs duties.

As for the VAT, different countries have different VAT rates. I for one prefer the 7.7% rate in Switzerland over the minimum 15% that EU member states have agreed upon (though no EU member states are actually satisfied with charging only that anymore, actual VAT rates currently ranging from 17% to 27%).

Does it make sense to buy these things outside the country? Has anybody ever done that?

We did it (bought in Germany), the difference/advantage was quite a bit bigger though. Prices were similar like you write, but if i remember correctly the German store was throwing in a free baby car seat though, which swayed the decision.
We live really close to the border, which was lucky, because unfortunately I had to go back to the store 4 times (not counting the time we ordered it)

My point is, these kind of issues, or repairs can happen at a CH shop too any time, but it just adds to the hassle if the German shop is quite a bit further away than the Swiss shop. And you don’t really want additional hassles in your life at that point

PS final tip - depending on your make and model, it can take months until you get it delivered, these days maybe even longer with the supply chain issues. Don’t be late

Yep some stuff is really much cheaper in Germany.

What hits me the most is cosmetics.
On the other hand, IT equipment is often cheaper in Switzerland, or similarly prized in my experience (example my alienware here was about 500 CHF cheaper all things considered compared to Germany, plus of course all the warranty issues I do not have by buying in Germany instead of Switzerland).

“Can some one explain me why we even have this anymore? inside the EU there seems to be no customs tariffs whatsoever… What is the advantage for us consumers except for being forced to pay overpriced swiss profit margins?”

Well, higher prices means higher incomes and returns all around. Until/unless salaries and rents in Switzerland more or less match those in neighboring countries (and who wants that?), we will pay more for goods and services here. But there is always the option of shopping across the border. As San_Francisco mentioned, net prices are often cheaper even after accounting for VAT. That is even truer now that we have franc/euro parity.