Why not only VTI?

I have been planning to change my portfolio from VWRL+ SMI/SMIM ETF to VTI+VEA+VWO and I started buying VTI in 2019.
Looking at the graphs of VEA and VWO, it looks like they haven’t gone anywhere since 2008.
In this bear market VTI didn’t drop more than VEA and VWO (until now) , actually even less than VWO.

Currently 55% of what I have invested on IB is in VTI, 30% is in VWRL and 15% is in Swiss Mid Cap.
US is around 70% of the total…
I know that past performance is not indicative of future results, that in previous decades US didn’t always perform better, that it’s not a good idea to concentrate everything in US.
On the other hand VEA and VWO look like slowing down the performance of a portfolio without adding much and being still corrlated to VTI.

What do you guys think? Am I being unreasonable? Any suggestion to shift my point of view?

Yes it’s true that the US outperformed for the last 100 years, but we don’t know if this will be the case for the next 30 years. Japan was once the best performing market too and got to the point where they had the highest market cap in the world (similar to the US right now). How did they do in the last 30 years?

What do you guys think? Am I being unreasonable? Any suggestion to shift my point of view?

Didn’t you already answer it:

I know that past performance is not indicative of future results, that in previous decades US didn’t always perform better, that it’s not a good idea to concentrate everything in US.

You know it’s a bad idea, why do you need convincing

If anything, it’s possible that EU countries are more equipped to handle the crisis, the US doesn’t have “partial unemployment” like Europe is doing, so there’s massive layoffs going on, while in Europe there’s still a chance that at the end of the crisis, most people will still have a job and will “just” go back to work.

And at least Asian countries have been able to handle the crisis somewhat well so far, China is going back to work, most things kept working in Japan and Korea.

My illusion is probably that it’s feasible to understand in which part of the cycle we are (US outperforming or not) with a relatively short delay (2-3y). These cycles seem quite long (7-8y).

To make things more difficult, there are some things where US is more advantageus: lower TER, 0% L1TW. That’s an additional 0.2/0.3% drag on non-US investments).

The reason why I don’t only invest in VTI, is because I believe in long term market efficiency. You still have over 40% of the market cap locked into the rest of the World. Why do these investors not jump ship and all buy VTI, if it’s so obvious that it will keep outperforming? 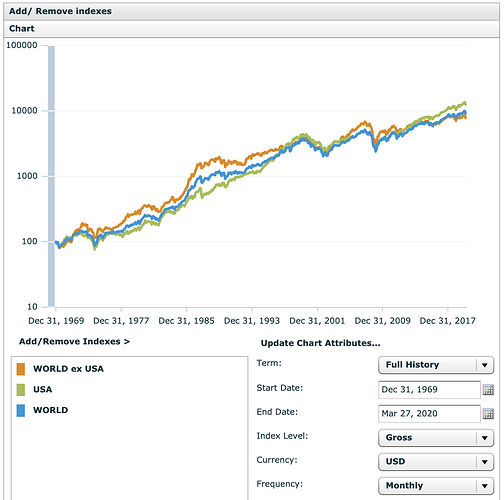 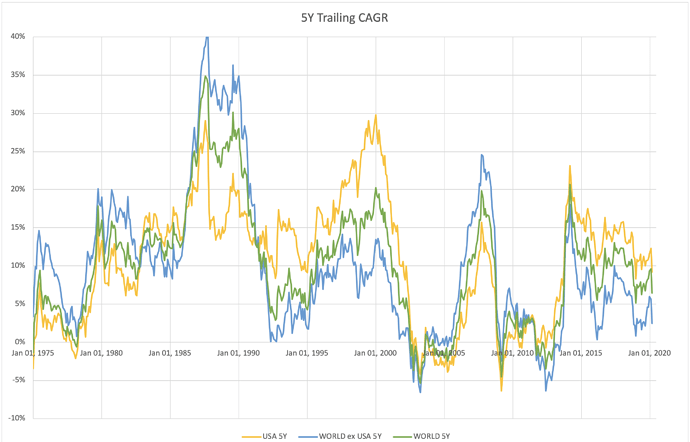