Tax disadvantage and higher ter adds up to around 0.4% higher expenses. That is quite a significant difference.

There are many solutions for lazy people. None of them are the best.
This is no different from VWRL(VWRD) other than being accumulating instead of distributing which makes no difference for a Swiss investor as tax payable is exactly the same.

FYI: I wrote about it here:

Hi Everyone Does anyone know why only the former of the following two ETFs seems to be available on CT? I could not find the second one. Is there something I am missing? Vanguard FTSE All-World UCITS ETF (USD) Distributing IE00B3RBWM25 VWRL (SIX) Fact Sheet Vanguard FTSE All-World UCITS ETF (USD) Accumulating IE00BK5BQT80 VWRP (London) Fact Sheet And additionally: as far as I understand VT is distributing. Is there an accumulating ETF that tracks the FTSE Global All Cap index? Thanks a lot …

I would not call more than double “not faar away”.

I would say, in the long term, for a Swiss investor an accumulating fund could be problematic. Let’s say you reach your FIRE age and start withdrawing. With a distributing fund, you have regular dividends, plus you sell as much as you need. With an accumulating fund you could only get money from selling, all of which would be capital gains.

Furthermore accumulating funds are sometimes a shit to figure out in time the dividends it included for tax declaration (they still have to get paid), especially if not available in ESTV tax tool, and sometimes even then.

If they are your only source of income, then you break one of the guidelines. But some said that buy and hold investors like us would never be classified as pros.

Happy to stand corrected on these figures, though.

Even the though U.S. accounts for biggest part (57%) of that fund, that seems a bit oversimplifying it:

That’s fair, I guess DA-1 should allow you to reclaim it.

Having questioned before the fixation on TER, I have just quickly cobbled together a spreadsheet for the distributing ETFs (VWRD / VWRL domiciled in Ireland and VT domiciled in the US), beginning in 2013 - the first full year that VWRD / VWRL has been available: 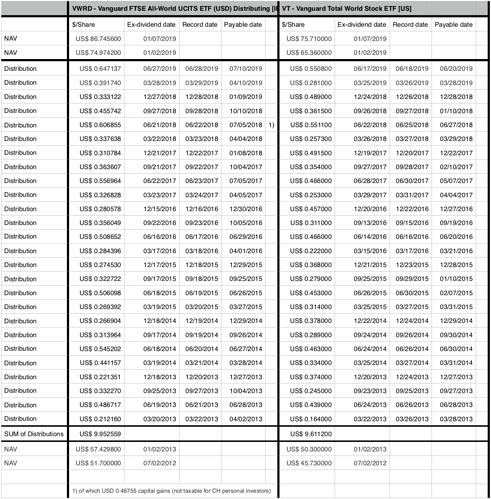 I fail to see how VT or Vanguard’s US ETFs are supposedly that much superior to the Irish ones.

In this example (though not discounting dividend cashflows or accounting for compound interest on them, since I’m lazy and interest rates are now low anyway), the difference would haven roughly amounted to 1% over a period of 6 years.

I tooked your table and made a normalization for 100 USD invested on 01.02.2013. If I sum the dividend with the increase in value I obtain at the end 168.37 USD for VWRD and 170.54 USD for VT which is a bit more efficient. The TER as well as the withholding tax has an influence.
The point which is not clear for me but people with experience could answer. I I am living in Switzerland and I held VT which percentage is the withholding tax for me?
Is it 15% because the ETF is based in the US or is it proportional to the percentage of US shares in the ETF?

Withholding tax at individual level doesn’t matter, you get it back thanks to the treaty with DA-1. And then you pay ordinary swiss income tax, same in both cases.

Withholding tax at fund level does matter, because you don’t get any of it back and get double taxed, that’s why VT is more efficient.

Yes, factoring in the non-taxable capital gains distribution at (whatever) your the marginal tax rate, it’s pretty much 1% over that period.

The point which is not clear for me but people with experience could answer. I I am living in Switzerland and I held VT which percentage is the withholding tax for me?
Is it 15% because the ETF is based in the US or is it proportional to the percentage of US shares in the ETF?

For dividends distributed by U.S. companies to an ETF…

For dividends distributed by non-U.S. companies (3rd country X or Y) to an ETF…

So the oft-cited 15% difference applies to the proportional share of U.S. companies’ stock. Dividends from other countries will might be subject to a lot of different withholding tax rates - or none. For “World” ETFs, it does work slightly in favour of the U.S. ETFs, as U.S. companies’ stock makes up such a big part of their indexes - whereas for other countries (say a European or Emerging market index ETF) Irish funds might fare better.

For distributions made by an ETF to the Swiss retail investor:

Hope I got it right

Somewhere, somewhen, someone posted a comparison which is not based on assumption, but on real data from the ETF reports.

Mind you, these calculations assume 30% L2 withholding tax, so not directly applicable to us.

Forgot to add: it is important to note of course, that both have been following different indices since 2011.