I did check today the exchange rate historical values from 2001 to 2011 and apparently the USD lost 47% of its value against the Franc. So if I had an ETF in usd back then, it must have made me more than 4% yearly in order to be at least on par with its value in CHF. I am reading it wrongly?

You are not reading wrongly. However, you just looked at a 10 year horizon. What’s your personal investment horizon? Imagine your lifetime - your investment horizon might be another 50 years, right? So, just check back since 1971 - when Bretton Woods [the system where FX rates where pegged after WWII] was uplifted by President Nixon to finance the Vietnam war - in order to see the picture even more clearly:

Or even more impressive, the GBP which also suffered an increasingly lower representation in the IMF drawing rights pot (the Chinese Renminbi won quite some traction there recently):

These FX fluctuations are also the reason why the Trinity study and their 4% rule only work for the US and failed for 17 other developed nations: https://retirementresearcher.com/4-rule-work-around-world/

That’s why some home currency bias, eventually some real estate holdings and a good currency hedge should be engaged to protect your purchasing power. Additionally, adding some Emerging Market currencies of economies that are still having their best times ahead could also make a lot of sense.

If you invest 100% in a S&P500 ETF or VTSX you have many companies with global exposure in your portfolio already, you have a natural hedge within their businesses so to say [Coca Cola sells in Switzerland as it does in India and China]. But if you rely on your portfolio on a day-to-day life and need to withdraw CHF cash to replace a salary, then you better get hedging, reduce the %-age of the withdrawal rates OR install a leverage-floor-portfolio securing a min. spending floor while still allowing for some upside with the remainder.

Hello Matt,
nice answer but it raises more question than it answers

You horizon is a bit too long in my opinion. My idea was to study a portfolio before I stop working since after that moment I might be changing it to avoid any eccessive risk. So a 10 year horizon might make sense for many people on this forum. After retirement, then I think things must be changed.

Well that might not be that easy in Switzerland. What do you mean with a good currency hedge? I thought that investing in SMI could be a good hedge; Coca Cola might stop selling in Switzlerand if it’s too expensive, so I don’t see how it could help hedging.(Or better said, Coca Cola might make a bit more money here (how much globally? 0.0001%) but that won’t reflect the gains I will need to do).

Leverage-floor-portfolio sounds like an interesting idea, if only I know what it is.

I might have seen some ads about that kind of products, but honestly seems too good to be true.

The horizon should be as long as you plan to keep your money invested. Warren Buffett once said “The best holding period is forever”, so I try to invest as if the stock market remains closed for the next 10 years which is in line with your horizon. If you see how the GBP looses 90% and the USD about 80% of their respective purchasing power in about 50 years time - this might be happening again going forward. Slowly and step by step. Hence, a good currency hedge is a natural implemented hedge that you don’t need to manage, instead of Coca Cola, just take Nestlé shares instead. You will earn money no matter what, if there’s inflation or currency devaluations or even currency reforms (imagine a EUR breakup or something similar), Nestlé will still be selling their coffee, their chocolates etc. maybe for Bitcoin or whatever currency will be used. A good currency hedge protects your purchasing power in the very long term. By investing in the SMI you have also a nice hedge, but a strong exposure to a weakening financial industry.

Actually they don’t run any adds on the “leverage-floor-portfolio”, which is not an available product [yet], but a neat Stanford University invented portfolio by John G. Watson who is a Financial Engines Fellow and got supported by William F. Sharpe (see Sharpe ratio, 1966, Nobel price), Mr. Watson currently manages USD 92 billion [!!!] of assets [which is in excess of Warren Buffett and his Berkshire market cap]. I do like their out-of-box portfolio approach which got the support by CFA Institute, Stanford University and somehow practically nobody knows this guy or his ideas. I’m actually planning to write a blog-post on www.financial-imagineer.com in the near future to explore alternative portfolios such as these. Feel free to follow the blog via Facebook or Twitter.

Wouldn’t it make more sense to compare inflation adjusted exchange rates? Historical nominal exchange rates hardly matter over a longer period if you invest in equities. They are already an inflation hedge.

Exactly. The OP is reading it wrongly. US had 3% inflation, while Switzerland much less. That makes up for the big change. Compare inflation adjusted rates.

I have no idea how to put those info all together

but it seems that it’s not as bad as it looked. 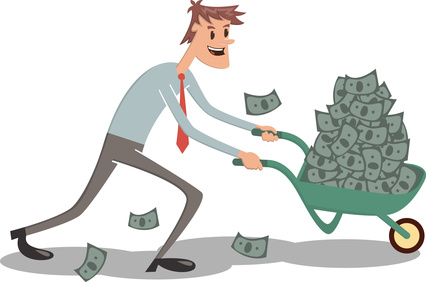 Inflation calculation between 2 dates for major countries and charts...

Inflation calculation between 2 dates for major countries and charts United...

There is still a risk. 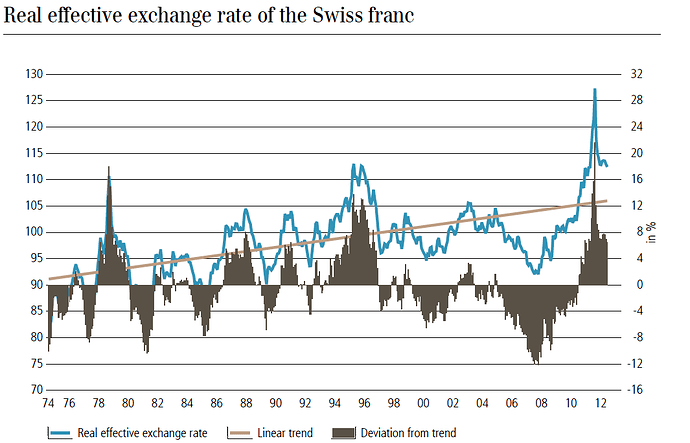 The weighted average of country's currency relative to index or basket of other major currencies adjusted for inflation. We explain the Real Effective Exchange Rate for the Franc, the Yen and Renmimbi

Great post - thanks for sharing. I particularly like the fact that the Chinese currency appreciated so much and strongly believe there is much more potential to climb higher during our lifetime. I currently use the SGD as a proxy and have some Singapore Dollar exposure to participate from this trend. It’s especially scary if you look into the books of the FED and discover how much US government debt is already in Chinese possession. This is mainly the case to keep the CNY artificially low and if one day USD global dominance would start to drop, the Chinese could drop their holdings.

Observe how especially GBP but also EUR and JPY lost their power over time. The US could hold themselves almost at same levels as earlier and only had to give up 2.27% from the peak level of 44%. Since 2016 the CNY has 10.92% exposure (up from zero!) - I wouldn’t be surprised if that percentage would be corrected once again to the upside in 2020.

As for the past:
I’ve got Swiss friends of my father who used to work in the U.S. in the 1960’s and 70’s and receive their social benefits today - living back in Switzerland - based on their contributions in USD back in the day. The payouts are about 80% less worth in CHF nowadays of what they expected or should be receiving based on their original contributions. Inflation in the US and UK was somewhat higher over time for sure, but they can’t explain the whole difference.

Besides real estate and equities I also like to invest in foreign fixed income (e.g. high yield, floating rate high yield and emerging market bonds, e.g. Chinese HY bonds) as well as in other assets with a CHF hedge on it. Of course you pay for the protection by giving up some of the benefits. There’s no free lunch.

I truly enjoy this thread and the discussion here today!

Historical nominal exchange rates hardly matter over a longer period if you invest in equities. They are already an inflation hedge.

I am not sure if I understand correctly this. Sure, if you really have high inflation, stocks are going to go much higher. However, on the period considered (2001-2011), it is hard to say that stocks really had a good time, even if US had much more inflation than Switzerland. To give an idea, the below graph is the performance of the S&P500 over the period (without dividends). It reaches hardly 15% in ten years (i.e +1.4%/year)!

Sure, dividends would have added 2-3% per year. That would have added around 22% to the overall performance. But that does not cancel out (far from there) the fact that USD lost a lot of its value during this period. -47% in 10 years is on average -6% per year.

so people are really complaining that are “rule” (4%) that has been backtested for 30 yr periods fails to perform in a 10 year time horizon picked in the worst possible moment? Well hallo, of course it will fail if tested outside design.

Let’s try to look at it more realistically. Let’s observe the period between 31. May 1994 and 20. Dec 2017. This period is given automatically by the MSCI index pdf file. MSCI USA and MSCI Switzerland (expressed in USD) are almost identical: MSCI USA returned 9.31% p.a., MSCI Switzerland expressed in USD returned 9.52 % p.a. (gross return incl dividends). So the two countries, expressed with the same currency, have an almost identical return. We can compare the two then, as they are highly correlated.

CH 6.64% vs USA 7.0% so a wash basically, or a slight advantage for US. Over time horizon of 20+ years currency exchange don’t really matter.

The problem of the chosen time period is critical. And of course, of course currency exchange add a layer of volatility on top of your stocks volatility! So it’s even better to invest for growth in USD since more volatility usually means more returns (and higher risk).
But nobody said that in retirement you need to have all the money you are going to spend in foreign currency. That would not be wise. So the drawdown strategy in retirement is forcibly different than the accumulating strategy.