I’ve finally found the citation I was looking for while reading how much you guys read and watch videos about selif improvement and stuff.

Reading, after a certain age, diverts the mind too much from its creative pursuits. Any man who reads too much and uses his own brain too little falls into lazy habits of thinking, just as the man who spends too much time in the theater is tempted to be content with living vicariously instead of living his own life.

Nice read that.
Apart from your quote, which is something to ponder,
I snorted at the “…like Mussolini, Einstein has the distinction of having become an almost legendary figure in his own lifetime…” (Try make that comparison today!)
I nodded at “do you believe in the German Republic? Undoubtedly. The people have the right to rule themselves. Now at least, our mistakes are our own.”
And I giggled at the last paragraphs about Mrs Einstein, second wife, “the devoted and luckily self-sacrificing wife, because if she had been different/less so, who knows, Einstein may not have been able to make the discoveries which links him to immortals.”
Ironic that these days one actually presumes his brilliant mathematician first wife actually co-authored many of those famous papers, but didn’t get any credit for it.

Holy shit, times have changed.
I also like this underwear advertisement: 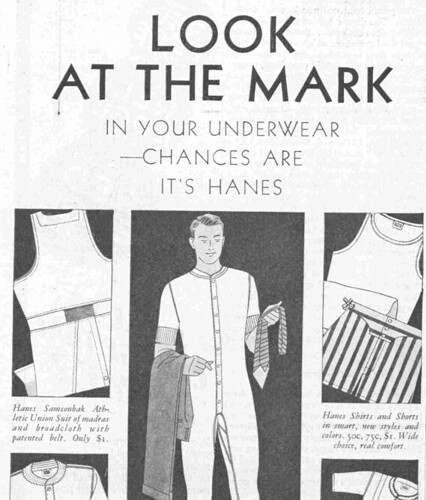 Having to explain to men, that the underwear, their wife bought them (if I interpret correctly), is actually their brand.