In Switzerland, my understanding is that married couples with dual incomes are generally taxed at a higher rate than those with a single income (for the same given total household income). I am trying to understand the subtleties of this.

If I do the math for, say married couple with 2 kids earning 100k/year in Vaud, I get the following rates for income tax at the source:

This ~4% difference seems fairly typical across the cantons I’ve looked at.

So, if, for example, Mom goes back into the workforce after having kids, there is a ~4% penalty to the family. If Mom works, say, 1 day in the year and earns 200Fr, does this still apply? Or is there some threshold? In this example, it seems like the Mom needs to earn 3840Fr before her efforts start having a positive effect on the family’s finances (simple calculation not considering the higher bracket due to higher total income)…

Or am I missing something?

This taxation policy seems to be quite anti-woman in the sense that it pushes women out of the workforce (along with some other policies and traditions in this beautiful country such as the bloody 1.5hr break in the middle of the school day where you need to find something to do with your kid…but I digress).

I don’t think they took this particularity of tax law into account, but here is some relevant reading (spoiler alert, Switzerland is last in Europe): https://www.unicef-irc.org/family-friendly

I don’t mean to come across as being a disgruntled expat (I love it here and see my future here), but Switzerland is well behind the curve in this department - perhaps last Friday’s events will give some impetus for slightly faster change.

Are you quite sure it works as you described?

I ran the numbers for a couple of scenarios through the Comparis calculator.

As you can see:

Btw, in Poland it’s much simpler. There your progression threshold as a married couple is always double of a single person. So if you both earn the same, you pay the same tax as a single person. But if only one works and the other doesn’t it’s a big tax save for the working one.

OK, yes, it appears (as all tax things do) that it is a bit more complicated than I indicated in my post. But the situation of a parent (still, in most cases, the wife) returning to the work force needing to earn a certain sum just to offset the penalty of having dual income is still there.

This is a recurring question in Swiss politics and I do not find it constructive for the following reasons:
The tax system shall give the possibility to redistribute wealth and obviously a married couple without kids and 2*100 kCHF income needs less money per head than two single persons with CHF 100 k income each.
Calculating only tax without taking into account the social system is also not fair. After the death of a single person there no social benefit to pay anymore as in the case of a couple there may well be some social benefit paid to the surviving member.

This is strange. Somehow when the other person only gets 10k income, the effective tax rate goes down?

But in any case, more income = more tax, always. So I don’t understand what you mean by “penalty”.

The tax system shall give the possibility to redistribute wealth

. But seriously, when talking about any tax, there should be a justification for why it exists and why in this form. To me, progressive taxes are just complicated and unfair. Income tax in my understanding is a “commission” for the state for enabling you to generate income. So a linear tax seems in order here. Additionally you could argue, for low levels of income it is unfair for the government to charge the commission, so you could say “the first 10’000 are on the house”, and then it’s linear from there. Doesn’t matter if you’re married or not.

But the situation of a parent (still, in most cases, the wife) returning to the work force needing to earn a certain sum just to offset the penalty of having dual income is still there.

I’m pretty sure that’s not true, tax systems go to great length to avoid that, unless the marginal tax rate is 100%, then if the household earns more money, you still have a positive extra amount after taxes.

The married vs unmarried taxation debate is another issue entirely.

I know a couple with a young kid in another Swiss romande canton where the wife had an offer of a 20% contract in her domain but they decided they would turn it down as they would only come out marginally ahead after taxes.

I think I’m missing something then, all the tables I’ve seen have a progressive taxation. When you’re filing jointly aren’t you just summing the incomes of both spouses?

There are two Barèmes for married couples : B for single income, C for double income. The issue is that (as far as I understand) as soon as a single franc is earned by person 2, the tax rate jumps up as the couple goes from B to C.

I don’t know man, here is the ESTV calculator for Vaud. With 10k 2nd income the tax only goes up by 1k. There is a ton of deductions for “Zweitverdiener”. 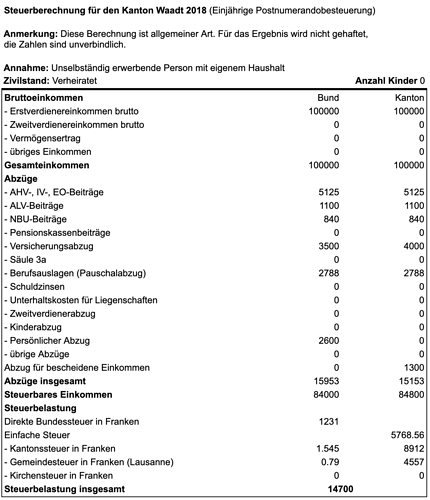 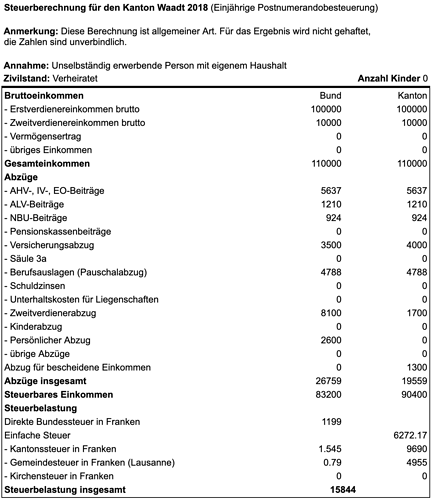 While I am not a fan of taxes at source, this is not how it works. In general they assume that your partner makes as much as you (caped at 65K) and then they tax you on that income. But if you partner made much less you can ask for a correction at the end of the year and they will use the actual income of your partner. You can look up the explanation for canton Vaud on page 13

And now, for something completely different:

Over the long term it always pays to keep your spouses in the working process. After 5 or 10y of staying at home with the family, wifes do hardly find jobs according to their competences.
I know a ton of people who are/were stuck with shitty jobs in this sittuation.
I would force my gf to work even if we’d lose monsy after tax or daycare (we actually get subsidized daycare and we’re far from poor), for this reason

Yes, understood, but Impôts à la source is supposed to take all standard deductions into account already (assuming including the double earner one for Barème C)…

When I use the excel macros here (VD Impôt à la source) I get 8.22% and 12.06% for the cases above using the general calculette, but then get 6.57% for the rectified Barème C! This corresponds to two salaries of 50k with barème C2.

So, this is the crucial piece of info: the rate applied is for 1/2 of the couple’s income.

However, in this case, if partner 2 earns 1 Fr in the year, the couple earns 1650Fr extra after tax - this doesn’t seem right either…

Trying to calculate with just 1CHF is just a waste of time. If the second person do have a job, it can deduct a lot of expenses for that (lunch? work clothes? general expenses?) If you put your number on any calculator, you’ll see that the 100k+1 couple will pay less taxes just for those deductions. Which of course won’t be calculated in real life since the tax man will come to you and ask what kind of job do pay you 1chf and ask you pay for work clothes and so on…

you don’t want to go down that rabbit hole

is not easy to come up with a number. I’m not married, so me and my GF have separate säule 3a. Since I work 100% and she 40%, it makes sense for me to fill up my VIAC account to deduce income, but not for her because the tax reduction is negligible at her salary level, you don’t want to have a the money stuck for 30 years for nothing in return. If you are married, you can deduce the 13k combined from the sum of your salary, making for at least 1500 chf less taxes.
This is just something small but to show that really there are so many variables it is difficult to come up with a clear cut view of the situation.

…though of course 30 years of tax deferral aren’t really “nothing”. We’ve recently had that discussion over here.

Personally, I wouldn’t bother to invest in pillar 3a either, without getting a sizeable tax break upfront - but I wouldn’t rule it out as a consideration. Though one should keep in mind that the money will still be taxed at the time of withdrawal later (e.g., you contribute after-tax money without having a meaningful deduction - and then get taxed again on the withdrawals later).

It’s likely to be changing soon, legislation currently in parliament.

such as the bloody 1.5hr break in the middle of the school day where you need to find something to do with your kid

Most places offer full-day schooling (“Tagesschulen”), but it depends on where you live.

Switzerland is well behind the curve in this department

Welcome to Switzerland. Legislative changes are slower, but tend to be more stable. It’s a tradeoff, seems to work well enough though, judging by the results.

Calculating only tax without taking into account the social system is also not fair.

Hear hear - similar complaints as I hear about the pillar 2.

Over the long term it always pays to keep your spouses in the working process. After 5 or 10y of staying at home with the family, wifes do hardly find jobs according to their competences.

I thot the whole point of mustachianism was to retire within 10 years?

I thot the whole point of mustachianism was to retire within 10 years?

Depends who you ask.
For some, it signifies just the FI part.
And I don’t remember there was a strict timeline defined.