I know that the general wisdom is that not being married is an advantage tax-wise - I’m not married as well.
But I was looking into diversifying my brokers and thought that instead of opening a Postfinance account, I could give money to my girlfriend and invest fro mher postfinance account, so that she can keep the 25k investment more easily, particualrly now that after PF increase of 3a TER, we are looking to move her to VIAC.

and of course, in certain cantons (mine is Fribourg) moving money between peoples gets taxed - a lot if you are not married or live together for 10+ years.

So yeah, not marrying is great for taxes, but only if you really are not exchanging money with one another…then depending on the canton it’s a pain. And I can give her 5k in 5 years to invest in PF without taxes. A bit of a shame.

Well… The alternative is you being ripped off on top of a divorce, so this is quite a small price to pay imho.

Also - depending on your NW and income, stuff like that doesn’t need to be reported, no one cares if you gift her 20K if she has 200K NW and above 50K income…

Sure the perfectly legal way is doing it as you described, but why do we have a Bankgeheimnis, if you don’t take advantage of it lol? Just for rich Oligarchs?

I know that the general wisdom is that not being married is an advantage tax-wise - I’m not married as well.

Yes, but the commitment is much less strong and she could ditch you with another guy anytime she feels like it. Of course, you could do the same. It is also much more difficult to get something for her from your second pillar in case of your death, also no AHV, etc. And by default she will inherit none of your cash at all.

I could give money to my girlfriend and invest fro mher postfinance account, so that she can keep the 25k investment more easily

While I don’t think this is a good idea to do, what if you get into quarrels with her, she breaks up and just keeps all the money? Not saying that she would but this smells like lots of potential troubles.

If you really want to do this I would do it as follows:

Schenkungssteuer is only for the case when you transfer ownership of the money to your girlfriend. You could give her the money to invest in her account on your behalf in her PF account and she has to declare you as co-beneficial owner of the money at her bank. Like that, there is no transfer of ownership and no Schenkungssteuer is owed. You then declare her account in your tax declaration and the part that is yours and she also declares her account in her tax declaration for her part. Of course, the sum of both should be exactly what is on the account statement.

Yes, but the commitment is much less strong and she could ditch you with another guy anytime she feels like it.

Well she could do that even if she is married the “commitment” is solely a spiritual thing - nothing more.

Yes, sure but still I think the bond and commitment is much stronger when you’re married. If you’re with some person for a longer time there will be inevitably times of crisis and if it’s just a girlfriend, the hurdle to just give up is much lower. You can basically take your things and leave and the thing is done. If you’re married there is are separation times I think 1 year, lots of paper work, a long and emotional process, not something you do lighthearted and repeatedly. A girlfriend you can in theory change every few weeks without any impact. If you’re married it doesn’t work like that.

What about a 0% interest loan to your partner?
Would still be taxed as your wealth, but can be freely invested by her. In case you break up, all things are written down and you can claim back your money.

…and those are even only the legal super-clean options!

PS not so clean btw is transferring investments to your gf, letting her be taxed on the dividends at her (lower?) rate instead of your (higher?) rate.

Some good thoughts here - forgot the 0% interest loan possibility.
The whole thing is really outdated and ridiculous - I mean I can legally transfer, tax-free, to our children. And the children can, tax-free, give it to their parents (the mother).
So in reality it’s already possible - so why there isn’t a direct line between unmarried parents, is burocratic insanity.

And the children can, tax-free, give it to their parents (the mother).

Can they though? Are you sure? Might be different where you live. In canton of Bern you get taxed for that:

Yes, half of kanton have tax free direction from children to parents:

It’s quite funny to see that the cantons who have tax free schenkung to the “lebenspartner”, aka unmarried couple, are the “rural/conservative/catholic” cantons

the power of money

other ways of transferring the money, for example by unevenly splitting common expenses (in her favor)

I just came across this which confirms the above principle, in a similar situation. 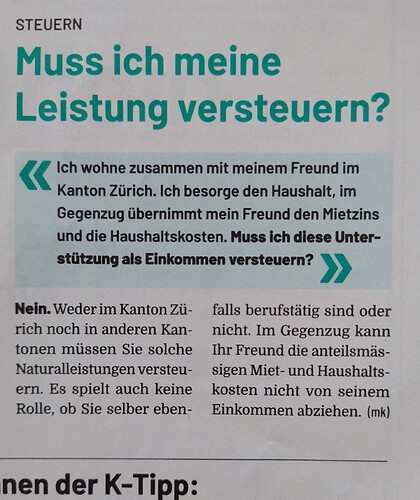 Gf just shouldn’t declare more money/Vermögen on 31.12 than on 1.1 with no official income (which can’t be explained by capital gains).

In Zurich you can deduct your rent from the income? Or have I misread?

You misread. It says that if A pays the entire rent, then B doesn’t have to declare that support/payment/… as income, but in return A may not deduct the rent they paid extra.

deduct the rent they paid extra.

Deduct as a support payment?

correct, they cannot deduct it as a support payment