Pillar 3a - In the future maybe additional payment possible

that 24% do not have a significant gap

That’s not what it implies. I pay now every year the full amount but I have a gap of around 10 years. Not because I couldn’t afford it but because I didn’t care. I would be very happy if I could close this gap.

Agreed. Still, will be interesting to see if the pro-camp can find a counter-narrative from the same set of numbers. Maybe we should form the ‘Mustachian Party’, poach some voters from SVP & FDP, add some green stuff to the mix and we’re set!

Maybe we should form the ‘Mustachian Party’, poach some voters from SVP & FDP, add some green stuff to the mix and we’re set!

I suspect you will find more SP & Green Party voters here on this forum when looking at other discussions. But feel free to try

Why lol a flaw is a flaw. Just because it’s a millionaire that has to pay more by mistake you think it’s fine? Idk… That’s not my sense of justice. Everyone has the same rights and someone with 60K or so income could come into such a situation f. e.

It’s not a matter of it being a millionaire being affected by it or not, I’m thinking of opportunity cost. Such a reform would require a lot of time and energy for very, very few cases that don’t end up in a dramatic outcome. I’m working in a risk assessment/mitigation field, we deal primarily with risks that either have a high probability of occurrence, or a higher end impact if they were to occur, or a combination of a lesser amount of both. There are so many things to do that lesser risks don’t justify us spending time and resources on.

This is a similar issue. We can try to aim for perfect and spend time and energy trying to correct this issue, or our legislators can try and spend it treating issues that affect a lot of people, or that end up with people becoming destitute.

One of the key reflexions behind these kinds of thinking is that it allows for more optimization of the use of state resources. State resources aren’t free, they come from taxes. We can either solve other problems than this issue, or solve this issue if we deem it essential, but trying to do both means we would need more taxes. I’d rather have everybody paying less taxes than having a few people in a non life threatening situation being taken care of by the state (they have the means to identify this issue and avoid over investing in their 3a and will very likely be directed toward it by their 3a provider(s)) and everybody paying more taxes.

If you invest everything into one account and you retire with 2M you are going to pay a lot of taxes - somewhere around 16%.

If your marginal tax rate was lower than those 16%, you basically lost money, since you will pay more taxes than you actually saved.

How does it look if you add wealth tax & wealth based AHV contributions after FIRE into the mix? The total equation is a bit more complex. I suspect if you leave the “it shouldn’t be land” alone for now, just look at final numbers and assume that you will be a little clever when retiring, 3a is hard to beat.

Maybe we should form the ‘Mustachian Party’, poach some voters from SVP & FDP, add some green stuff to the mix and we’re set!

Please, do not associate me with that. Call it whatever you want but leave Mustachianism and FIRE out of it, you have no legitimacy to talk for the movement, nor do I.

“The low tax and financial literacy party, but with green and no racism” is a bit longwinded though…

But let’s keep the thread on 3a.

Even if so… A libertarian echo chamber isn’t helpful either and gives the FIRE movement a bitter after taste.

I think Switzerland has done pretty well with it’s implementation of a social market economy. but #offtopic I guess.

If it comes to a vote

There is unlikely to be a vote because this is not a change of a law, but of an ordinance (Verordnung). These are not subject to a referendum.

According to the article here the earliest probable year is 2024. 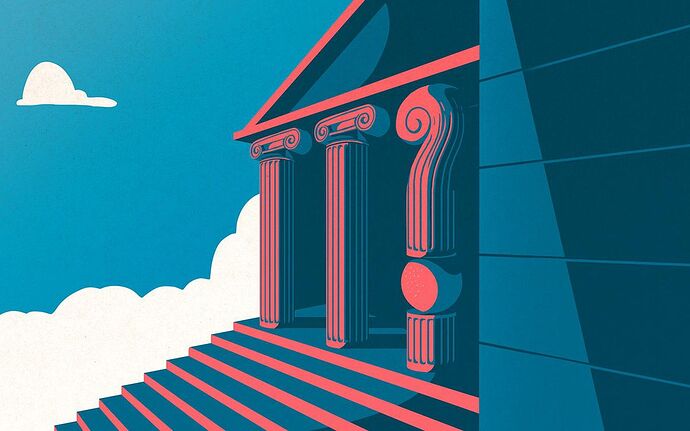 There could be further delay if someone manages to force the change to be treated within a broader reform package. Then it could take years. Don’t build your future on this change just yet.

I guess it would be easiest to check all your previous 3a contributions by looking at your old tax declarations.

Those documents aren’t stored for decades. Google tells me that there is a 3rd pillar since 1972.

So while they already made a table of how much one should have in their 3rd pillar, it’s very unclear what you should base it on. 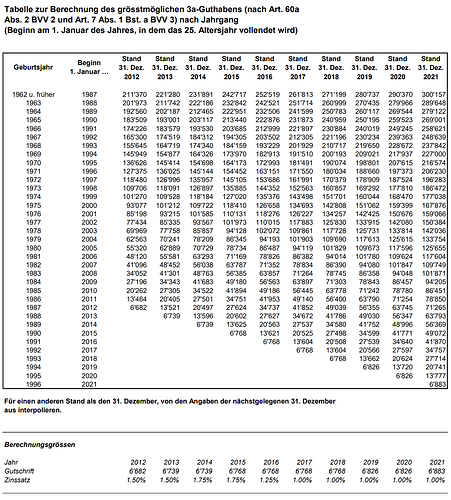 From what I understand, it seems relatively straightforward. You can contribute

In other words, your potential contribution is
maximum 3a benefits according to BSV table*
less 3a balance you already have
capped at 34k something Francs (regularly adjusted)

* which are calculated assuming that you‘ve made the maximum yearly inpayments for people with pension fund coverage every year.

What if I withdrew my entire 3rd pillar back in 2000 for renovations? You won’t find any documentation.

It will probably make more sense to set up something complete new (e.g. pillar 4) where you can set the standards from the beginning, as for instance trackability as for pension funds.

What if I withdrew my entire 3rd pillar back in 2000 for renovations?

You won’t find any documentation.

Surely you’d remember that. The same thing can happen in pillar 2, so it is consistent with the existing system in pension funds.

One thing which has not been talked about, and which could save a whole ton of administrative cost is the fusion of 2nd pillar and 3a into some 401 k type plan.

The second pillar is too expensive if you compare it to other countries (like Sweden having a statefund with higher return + lower running cost.

Then the companies can focus on their core business (Risk insurance like extended invalidity and life term insurance). But I guess some lobbies would strongly advocate against.

@San_Francisco Should have read the effing manual, thank you San Francisco. It’s all there.

One thing which has not been talked about, and which could save a whole ton of administrative cost is the fusion of 2nd pillar and 3a into some 401 k type plan.

Dream on.
We can’t even raise the retirement age by one year, or get a 2nd pillar law that reflects the current living trends (single, part time, longer study times).
No matter what you propose, 3/4 of the population get enraged.

I’ll be glad if even a modest reform like this gets through.