A lottery is also a game where, by design, you’re supposed to lose money…

What give me this impression is by studying this blog : https://nononsenseforex.com/ . It took some time to understand everything (especially for a beginner) and then a lot of work to gain experience, but it seems worth it, from the outside. Maybe I underestimate the amount of work required and it may be too much for a side gig as you mentioned.

If there are winning strategies (esp. in a high volume market such as forex), how do you explain this was not arbitraged away already?

I can believe there are winning strategies in stock (because some strategy might scale for an individual investor but won’t scale for a larger fund, so bigger players won’t go after it), but I can’t explain why it would be the case in forex given the volume/liquidities so would be interesting to get your reasoning there.

What give me this impression is by studying this blog : https://nononsenseforex.com/

By the way do they disclose what their revenue sources are? (e.g. how much do they gain from referrals?)

petsitting
go to www.petsitting24.ch
I can imagine myself being paid even a minuscule amount of money to walk (= exercise) with a dog (which I love but don’t really want to have).
what can I say, I dream small

By the way do they disclose what their revenue sources are? (e.g. how much do they gain from referrals?)

Sources of revenue for what? It’s just an education channel. Maybe the guy gain some income from his youtube content, but he’s not giving an all ready to use method or so, just hints. He sells nothing. Not everything is a scam…

He sells nothing. Not everything is a scam…

I’m not saying it’s a scam, I just wish people would be more transparent as to what their incentives and conflict of interests are.

He’s an allegedly professional trader who explain his advanced trading technique in Forex, without giving away his own indicators but explaining how to test and choose your own. No link to anything, no referrals or codes… Ok, maybe he’s pushing a couple of people a year to start loosing money on Forex… well I doubt you can gain money from that, or that the US Exchange is offering a referral program…

They definitely disclose referrals to fx brokers, I just wonder how much revenue that is. (e.g. for some prominent fire bloggers, it’s apparently pretty significant). 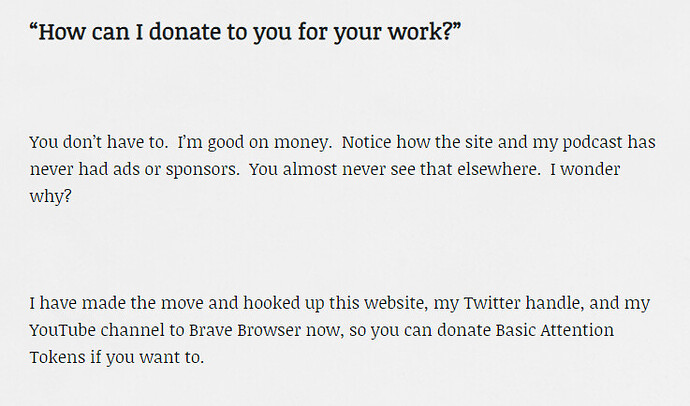 As far as I know all the FX broker link from the website are direct link, without referrals url or codes…

Anyway I don’t want to spend too much time defending the guy as I don’t know him or if he make money from that, that’s not the point and I don’t want to derail too much the topic. I suggest to listen to the videos though, I found it interesting stuff.

If there are winning strategies (esp. in a high volume market such as forex), how do you explain this was not arbitraged away already?

The first time I arrived on this forum/blog and see that you can “retire early by putting investement in the stock market even with a normal salary”, I had exactly the same reaction. So are 99% of the people I talk about FIRE. Only a few percentage of the population will take the time to go deep into digging on the complexity of the topic to finally became convince that it’s possible. I am, even if I have no result to show for it yet, but your NW inspire me, for exemple.

About 10 years ago I was into professional online Poker. Once again not gambling, not making millions, but by learning some statistics and plan, being able to have positive return over time as long as you stick to the plan. Exactly like you will when the market is crashing and you keep to your plan to invest in your ETF. You know (as much as possible) that it will be OK on the long run because you trust your plan. I didn’t stick with the poker because it require hours and hours of playtime in front of your computer and I didn’t like it on the long run, but the plan was working. And if you look at the top earners in professional circle, it’s always the same people, using always the same plan. With on or two lucky gamblers appearing from time to time.

So that’s my mindset when considering all those options. I might be wrong about this specific case, or the plan can be harder to find/learn/create that I expect, but I don’t want to throw the baby out with the bathwater juste because of the “but if that would work, everybody would be doing it!” argument.

Once again I’m not talking about the illusion of getting rich overnight. Just to find a way to create another stream of income, even small.

But you’re probably right about the liquidity issue, it might require a consequent amount of first income to not become margin called on the first fluctuation. Hence the months/year to train on paper money first…

@Zurtan check out The BirbNest - trading consultations and trading signals thread. Most of the forum members here were a bit skeptic but I actually gave it a try and 2.5x my crypto gambling money… DM for a referral if interested.

Thank you, but that’s clearly not something I will fall for.

I’m not paying for something I can learn to do, especially when it smell that fishy. Like I said I don’t want to gamble, I want to learn how to do things, which I’m actually learning. Will take some more months of education and demo-trade, but at the end I think it can be worth it. Thanks for the tip anyway.

Not the most lucrative but I started collecting about 5 pieces of Fintech related news per week for 20$.
Since I read Fintech news pretty often and it doesn’t take more than 10 minutes to create a catchy title for each article, it’s some nice beer money activity

Pet sitting seems interesting, I see a lot of ads in my local area! For the ones that have tried it before, what do the rates look like?

My girlfriend walks dogs from such a platform and gets anywhere between 5CHF and 15CHF per walk or per hour. And I don’t know how much you get paid if you take them for longer (a half-day or even a week).

Like I said I don’t want to gamble, I want to learn how to do things, which I’m actually learning. Will take some more months of education and demo-trade, but at the end I think it can be worth it.

I was also a bit skeptic but after the trial phase I was convinced. See it paying for training material on how to read trading charts, etc.

If you’re artistic and have some kind of drawing tablet, selling your designs on redbubble.com or similar sites can be an ok source for passive income. I have some designs I made when I was younger that bring in about 50€ a year, which isn’t much but it’a free money. If I got more serious with it I imagine it could definitely give more.

Maybe we should gather for some jam sessions and braninstorming on how to create a million dollar vibe!

Talking with colleagues it appears that a good number of them aren’t filling the tax declaration themselves and instead they’re paying upwards of 100 CHF for the service.
I’m wondering if it could become a small side hustle, after a few years of practice I can probably fill up my declaration in 30 minutes once I have all the documents so it should probably be a relatively quick job in most cases.
Does anyone know if you need to be a qualified professional or if there’re other restrictions for this?

I’m also interested to learn how to fill in my tax declaration; I’m at the moment learning (using Tax declaration guide (3/6): Abzüge [1/3] - mypersonalfinance.ch).
Would be happy to meet and share my findings; PM me.
Cheers!

Fishy or not, it transferred my crypto portfolio from 40k to 260k.