Without seriously considering it, I just thought about investing in the recovery of Ukraine, the great defender of my liberal Europe!

Then I found this and persuaded myself to let go… 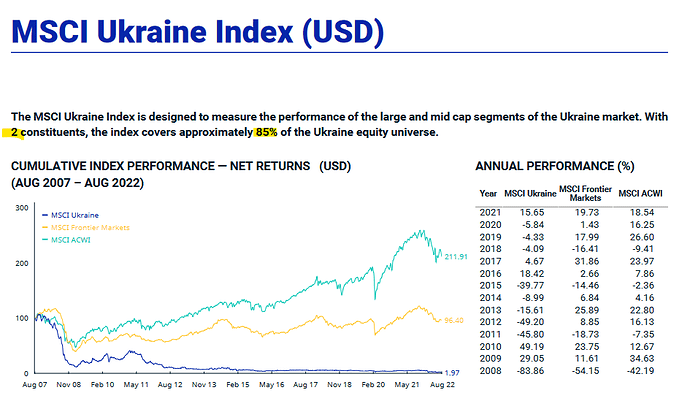 What do you think?

Well, yeah. It’s not even Emerging Market, it is Frontier Market. Dogecoin feels like US Treasury bond in comparison.

An index which consists of 2 stocks… might as well buy those 2.

Just buy the 2 stocks and save the etf fee?

and both are in agricultural export…

As long as the conflict is active, what you would really be doing is speculating on the conflict’s outcome. I don’t know if investing is the right word. But here are my opinions for possible investments.

A possible opportunity for investment may be buying property in regions which are less likely to be severely hit by the actual fighting until the conflict ends (i.e. the far West). In my experience, having lived in countries that went through political turmoil, real estate tends to be the safest investment. Whichever side comes out on top, it is likely that property ownership will still be recognized. The franc to hyrivnia rate is currently favorable, and many property owners who have left Ukraine or who want to leave are in need of ready money (especially foreign currency). Obviously, even property is a very high-risk investment in conflict zones, as it could take decades before demand is restored.

Eventually, once the fog of war clears and treaties are signed, you could look at construction companies, banks, and other companies which could benefit from reconstruction efforts. However, if we look at reconstruction efforts in other countries destroyed by war (e.g. Iraq), we see that reconstruction contracts primarily went to foreign contractors. This is both because local businesses are incapacitated to the point of being completely uncompetitive, and because the countries which supported the war effort demand reparations. So in the case of Ukraine, we would likely see major US, UK, and EU companies gain from reconstruction efforts. Vital infrastructure companies from those countries would be relatively safe bets. The foreign retail, healthcare, banking, and insurance giants which would likely buy up whatever’s left of local firms would be a next step, once basic infrastructure is restored and residents begin to return.

Reviewing the sequence and outcomes of recent wars in other countries is a good first step to understanding investments in wartorn regions, in my opinion. For example, we have seen that conflicts often endure for much longer than we would like to expect. The US-Afgan war lasted 20 years. The US-Iraq conflict began in 1991 and is still not fully resolved. Those are very long terms, from an investment perspective.

Of course, you could also make social investments in Ukraine by helping the Ukrainian people and by donating, volunteering, etc. That’s what I do, because to me people are more important than ideologies. But that’s different to investing, from a purely financial standpoint.