I’ve been watching KRBN for some time now, but never had the guts to invest in it. In times where many governments (including China) aim to reduce carbon emissions due to the threat of climate warming, the price of carbon emissions might rise over time. KRBN price development has been really nice so far, and apparently refreshingly uncorrelated to VT, which I find interesting.

However, it hasn’t been around for too long, it’s a highly political bet, and there has been some manipulation in the carbon market before. Also, total expenses are steep: 0.78. And of course, there’s no yield/dividends, since KRBN tracks the most traded carbon credit futures contracts.

What’s your take on the carbon bet? Slam me on this one, no hard feelings 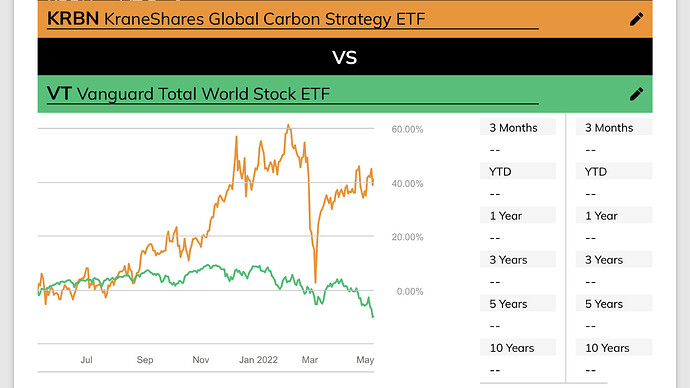 What’s your take on the carbon bet?

It depends from what perspective you look at it. Nowadays many do-gooders have succumbed to a new kind of indulgence trade, so from a purely financial perspective it could be attractive. It became a huge business model. However, there could be also a risk of a significant drop if suddenly more pressing issues come up e.g. should the war spread over to other countries, a new killer virus shows up, or the topic could just get out of fashion etc. So, potentially good profits but as always it comes with certain risk. On the other side you need to think whether you want to support such kind of eco-nihilism or not. I don’t.

I hope not off-topic, as I only speak of CO2, not allowances/emmission certificates thereof.
I don’t understand trading certificates/allowances, so I was looking at something CO2 related that I understand - I’ve looked into some companies which may benefit from the CO2 reduction boom in industry aka Carbon Capture and Storage (CCS) (that is basically capturing the CO2 coming out of the big chimney and storing in a long-term (centuries) way).
Of course reduction at source is/should be the primary aim, but as reduction is not always possible, capture becomes more and more important to reach CO2 emmission targets that (especially western) companies are setting themselves for 2030, 2040 etc. Many are setting these emission targets with actual reduction, without any certificate trading “games”.
I imagine serious investment in such CO2 capture will start picking up the closer we get to 2030, but starting soonish, as such projects can easily take 5 years or more to complete.

And for carbon capture in general from the atmosphere, there’s the Swiss Climeworks, also not listed though.

So I’ve been thinking about an investment in Aker, but haven’t yet.

I find the technology and it’s purpose very attractive / promising. However, i feel it’s kind of a venture capital investment, so very risky. Also, I fear there’s somewhat of a hype going on in the ESG/climate corner, so lots of this industry might be wiped out once the initial euphoria’s gone. Just thinking of the clean energy hype.

Same is true for carbon allowances, of course.