Influence of currency on SWR

Tldr: how much does a CHF based investor need to account for CHF strength in the future wrt the SWR rate (sorry if this is a repeat question, in which case I much appreciate a quick faq/link).

IIUC the original Trinity Study has been done based on assets in the US, so US stocks and US bonds - as well as it took the inflation rates in the US. And the result of which is the well known Safe-Withdrawal-Rate of 4% (or any other, safer, figure you prefer).

My question now is, how does this famous 4% rule translate to other currencies.

Let’s take CHF as an example:

In which case this would have to be factored into the SWR.

How are you accounting for this?

The difficulty with the CHF is that its “very strong currency” status is mostly due to the fact that people around the world think it is a very strong currency. At least 90% of the SNB Central Money have just been “printed under the desk” in the last ten years and sold to people scared by their own currencies. Up to now it hasn’t been a problem inflation-wise because the new CHF’s are not circulating and sleeping on accounts or stored as 1000 CHF notes in safes. However, the day the buying pressure reverses, things could become complicated…

Why would you want to early retire in Switzerland and live like some poor person here in a tiny apartment or something? It’s nice for work, about the 2nd best salaries in the world, but for living you get much better bang for your buck elsewhere, e.g. in Portugal or Thailand

Why would you want to early retire in Switzerland

Because family, friends, clubs, etc are all here ? there are other factors than money to choose where to live.

Because family, friends, clubs, etc are all here ? there are other factors than money to choose where to live.

That’s the thing. When I talk to old Swiss guys in their late 50s who are still in IT and ask them why they didn’t emigrate, they say that kids and family and friends are here. I guess if you want to make it work with retirement in a different country, you need to do it fast, before it’s too complicated for the kids. And I guess it’s easier to do it for an expat: you just come back to your country of origin.

Because family, friends, clubs, etc are all here

Then you pay a hefty cost for all that to be able to stay here. Might as well retire at 65

And friends/clubs with swiss as an expat? Really? This is most uptight and reserved country I’ve ever lived in so far

Then you pay a hefty cost for all that to be able to stay here. Might as well retire at 65

I would prefer to retire in Switzerland before 65. If the cost is a few more years of work, fine, that’s my choice. I am not sure to get your point. Do you mean that if one cannot retire as fast as possible he should just give up ER and work till 65 ?

And friends/clubs with swiss as an expat? Really? This is most uptight and reserved country I’ve ever lived in so far

As a Swiss working in an international organization, I generally give the following advises to new comers if they want to know Swiss people and maybe become friend with them : 1. learn the language (dialect is better, but plain German/Italian is fine) and 2. get involved in a club (music, gardening, church, dance, you name it). Getting into a club as an expat is not more difficult than for a Swiss, just fill in the form. Then take part and have fun !

Of course, your attitude might also help or hinder your efforts (if any) to get to know Swiss people…

I hear this all the time, but seriously, how does it manifest itself? Respecting other people’s privacy and night time?

Sorry to disturb the party, but it looks like this thread has diverged entirely from my original point. Which was about how to account for the influence of a currency on the save withdrawal rate. Esp, but not limited to, the CHF. Any input or thoughts on that front? I understand the reason why CHF is a strong currency, and that might change in the future, but given a strong currency my question is, how does that influence the SWR.

The question is quite complex. The influence will be based on two factors: inflation and currency rate.

What ever is the result of this analysis, not a lot can be done:

-Invest only in Switzerland is a bad idea, stock markets are highly corrolated and the biggest companies in Switzerland are doing the majority of the income outside Switzerland
-Buy hedged ETF ( like iShares MSCI World CHF Hedged UCITS ETF) is a bad idea, more TER and the hedging is on a monthly basis. The hedging will have little influence on the long term.
-Invest in gov or corporate Swiss bonds is a bad idea the returns are really low.
-Invest in real estate, maybe. On the long term real estate has lower returns, so I have doubt that it would be better than full stocks.

So, at the end, either you reduce the SWR or you go to an other country.

For more info:
This paper analyses SWR in multiple countries.
In the case a Swiss invests only in Switzerland: the SWR is 3.59% (page 14)
https://papers.ssrn.com/sol3/papers.cfm?abstract_id=1699526

The Withdrawal Rates chart shows the safe withdrawal rate for any asset allocation over a variety of retirement durations based on real-life sequence of returns.  Those looking …

Meanwhile I tried to get some more details on inflation vs exchange rates:

So with some huge (currency) fluctuations, which can easily be in the 30% range, in the very long term it indeed shouldn’t matter (from a SWR point of view) in which currency==country you will spend money since the currency should adjust for inflation.

The problem is, however, that a currency can be stronger or weaker than what inflation implies for years (perhaps 5-8 years, in swan events who knows probably longer). That might influence the withdrawal strategy/timing

You can have a dynamic withdrawal rate based on inflation, CAPE,ect.

After a three week hiatus from our safe withdrawal rate research, welcome back to the next installment! If you liked our work so far make sure you head over to SSRN (Social Science Research Network…

There so many possibilities that it hard to define a specific number.
it would also depend if you are ready to work again, if you work part-time or on some project, if you have income from the government, if you start your retirement in a bear or a bull market…

There is also this paper witch is interesting on the topic:
“Resolving the Paradox – Is the Safe Withdrawal Rate Sometimes Too Safe?”

Personnally, i thinks the CAPE approach is the best: 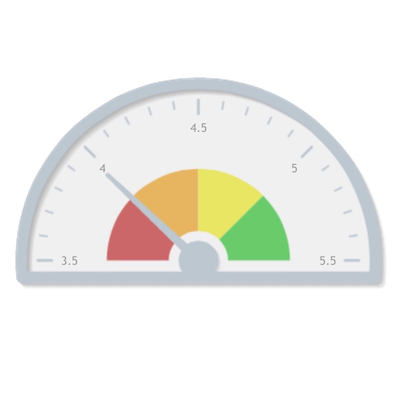 Calculate a Safe Withdrawal Rate that ensures your portfolio survives your entire retirement, even if you plan on retiring extremely early!

How the sequence of returns impacts sustainable retirement income, and the relationship between sequence risk, bear markets, and safe withdrawal rates (SWR).

I took the data from your link and made a full chart out of it: 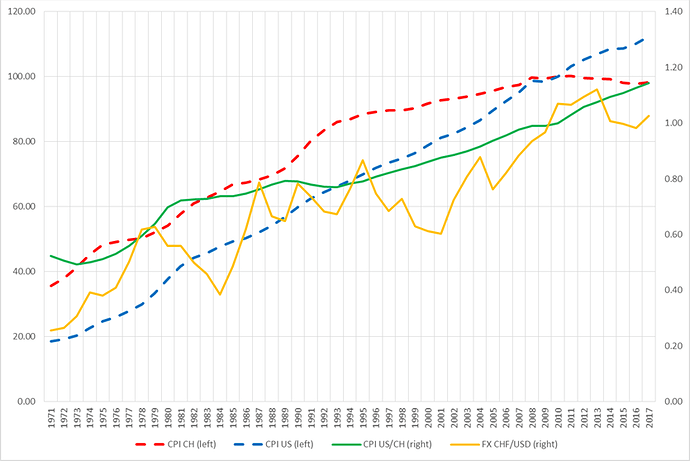 So it looks like in the long term, the FX rate really does follow inflation. And currently, it seems that the FX rate between CHF and USD is in equillibrium.

Thanks for the chart.This would confirm the Interest rate parity rule 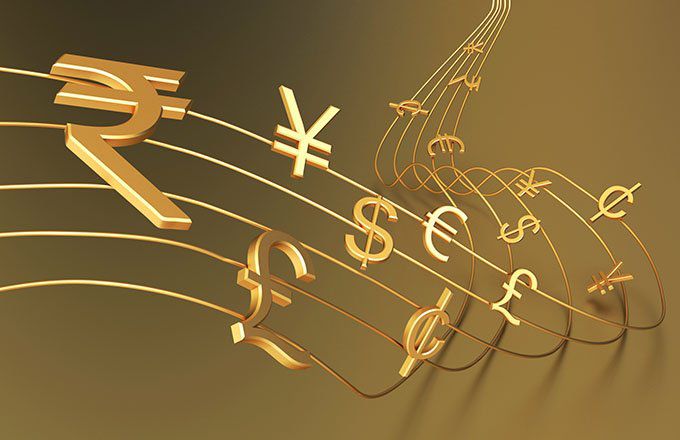 Interest rate parity is a no-arbitrage condition representing an equilibrium state under which investors will be indifferent to interest rates available on bank deposits in two countries. The fact that this condition does not always hold allows for potential opportunities to earn riskless profits from covered interest arbitrage. Two assumptions central to interest rate parity are capital mobility and perfect substitutability of domestic and foreign assets. Given foreign exchange market equilib Ec...

Could you pusblish the excel? from which link exactly have you taken the data?

A chart illustrates better the money creation issue with the CHF… 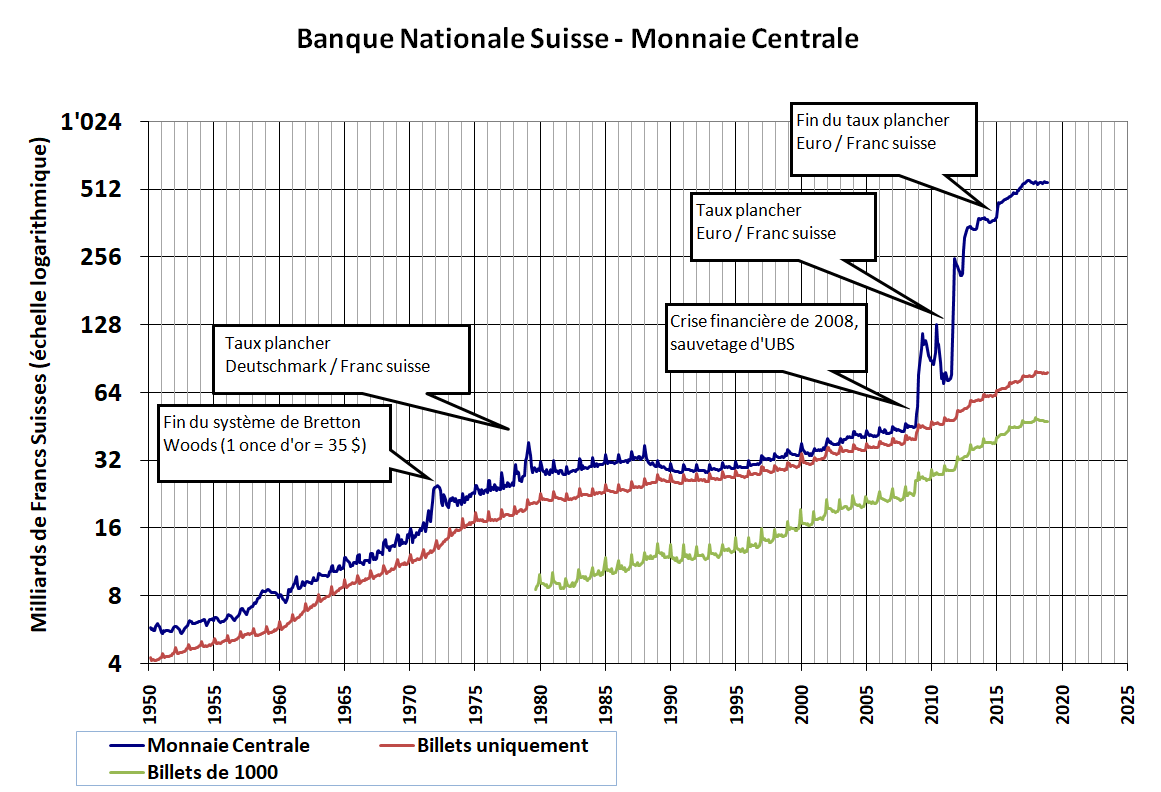