How to deal with 3a subscription and redemption fees when choosing more than one fund?

I switched to finpension and i want to recreate an All World portfolio with them. My problem is, that all funds have subscription and redemption fees.

This is what i came up with:

From my understanding, every month when it rebalances, i will be forced to pay redemption fees, because it might sell soms of my funds. You can see for EM the redemption fee is 0.3%, which is huge.

Is it even worth to use different funds or should i just use one single fund and nothing else, so i dont have to rebalance? If so, which one? Probably the World ex CH?

The redemption fee is only applicable on the buy/sell part.

Finpension is doing an internal rebalancing, so the cost will be lower.
For exemple, if customer 1 buys and customer 2 sells. Finpension will simply transfer the ownership between the two customers without any fees.

Thats what they told me. They call it “netting”.

Finpension has like 100 appstore downloads, i doubt they have so many costumers to swap around with…
Do you really believe, that they will do a decent job rebalancing? Im just scared that they gonna be selling/buying EM all the time with that huge fee, when theyre rebalancing.

Whats your opinion on the portfolio i came up with?

You can see for EM the redemption fee is 0.3%, which is huge.

Even without the internal rebalancing don‘t forget that it would only be charged on the rebalanced amount. Looking at Emerging Markets and All-World indices, the market cap of EM equities has hovered pretty constantly at around (slight above?) 10% - similarly to the US‘ share of around 55%.

From my understanding, every month when it rebalances, i will be forced to pay redemption fees, because it might sell soms of my funds. You can see for EM the redemption fee is 0.3%, which is huge.

One additional thought: In Pillar 3a, you often make continuous deposits. If you make monthly deposits, you may never need to sell any funds but just buy more or less of the individual positions. And in the unlikely event a sale is necessary, it will most likely be netted with other customers because they make more often deposits than withdrawals.

Thank you for the math. So do you recommend this all world approach?

I tought about this too but figured at one point the monthly deposit wont be enough anymore.

Do you recommend recreating the all world ?

So do you recommend this all world approach?

2% SMI is negligible. Won‘t make a meaningful difference.
I wouldn’t bother with anything less than 10 or at least 5 percent.

Otherwise, it‘s an All-world portfolio with a bit small caps and Emerging Markets mixed in.
Looks good, I‘d say, if you don’t want any Swiss exposure (you’re might already have it through real estate or your job)!?

If a home bias was desired, I‘d probably substitute the World small-cap fund with a Swiss mid-/small cap fund.*

* not saying you should.

Im not looking for swiss exposure above the marketcap because i hope one day to retire in another country so i dont desire home bias.

I use my “standard” portfolio which is basically all world stocks + 5% real estate. With the finpension / Credit Suisse funds this is: 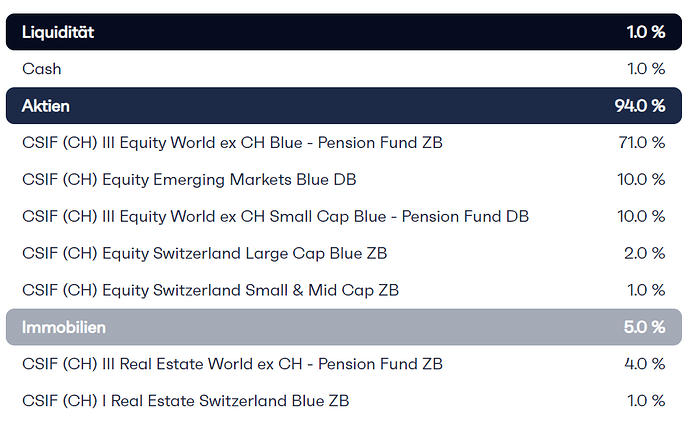 finpension can buy fractions of funds, so I opted for an all world portfolio replicating the “Vanguard FTSE All-World” ETF (VWRL). E.g. after my first payment I own just 0.025 “CSIF (CH) Equity Emerging Markets Blue DB”.
As the Credit Suisse funds are special pension funds, they have low TER and are exempt from stamp duty as well as withholding tax. This should compensate for any eventual redemption fees.