Dear all,
i just saw that according to priminfo my current health insurance will be CHF30 per month more expensive than the cheapest (assura, CHF 245/month) where two years ago that difference was only chf 5 per month. I guess I’ll swich since I anyway don’t consume health insurance services

[edit]
so i would plan to go for assura PharMed model, it is indicated this is the least costing option. does anybody have experience with it? good/bad?
thanks!

Assura pays only after you have paid your bills (Tiers garant - explanation in German Tiers garant - Tiers payant). I don’t think that is a problem for you, but lots of people get in trouble because they expect their health insurance to pay the bill first and not the other way around.

I’m in the same boat. I’'l probably switch to the same. Do check two or three of the KK’s sites, sometimes you can see differences.

On a side note: I have no idea what to do with the non compulsory part of it. They are not so easy to compare.

When I started with Assura, i was paying 200 CHF per month. Now I pay 230 CHF. My plan is standard with 2500 CHF deductible. All doctors send bills directly to me.

@Erma
good point indeed. however, as I seach the hard optimum in terms of costs (being quite healthy, i have never submitted any bills so far and don’t plan to, I am solvent) this is a no-issue to me

@ma0
yes, the non-compulsory seems to be tricky. i like the mitiva reala i have at atupri, for the transportation cost if i have an accident when in the mountains or for glasses, but there is also a lot of shit in there that i don’t need: alternative medicine, overweight, some hospital stuff, home care for children,… it will cost chf 23 er month an i am struggeling if i want this or not. well, Air Zermatt charges heavily for their services

Lucky you Nugget. I live in the wrong part of ZH then.

We should open a new topic about insurance optimisation. For example, I have Rega for accident in the mountains. I also have an insurance from my Migros CC when I go abroad… some of those things are covered also by the health insurances …

Swiss are overinsured. I think I’ve read it somewhere…

By the way, are there any downsides regarding other models? When I came to Switzerland I chose the standard model, because other models seemed weird to me (family doctor??). I was used to the Polish model, where I didn’t personally know any doctor and never have seen any doctor twice. Just go wherever you want, when you’re sick.

Regarding the Assura model. I pay the bills myself, but I’m too messy to keep track of the bills. If any serious thing would happen to me, and I would exceed the deductible, I would have trouble to find all my bills from this year in order to reimburse them. I guess this sucks a bit. If you’re a healthy person, you just pay around 3000 per year and you get nothing from it. You pay all the bills yourself and most of the time you don’t know how much it cost until 2 months later when the bill comes. That’s completely not free market logic.

I get higher rates than I actually pay

Well, your insurance did not tell you yet their new rates…

Why is that? can you explain?

I have the family doctor model because in my village there is only one doctor and in case I need to go to the doctor I will go there. The downside is you always have to go there even if you know that a specialist can help you better. I experienced this problem with my ear. It gets easily clogged but the normal way of getting the stuff out doesn’t work (I get dizzy with the water method) so I had first to visit my family doctor and then a specialist (2 bills instead of only one). But they said that next time that happens I can just call and explain and go directly.

The difference in cost when moving is due to the different rate regions (Prämienregionen). Bigger cantons are divided into more than one rate region so it can be that you cross such a border and get cheaper insurance.

I’m not sure when it started, but someone decided that if you live in a zone/city where many people go often to the doctor, then you also go often.

@Bojack: your premiums are probably increasing from 1.1.2018, as for most other people too.
downsides? if you hardly go for the doctor, no. if you have your trusted doctor and he’s not contract partner of your insurer, then you can’t get his bills reimbursed.

the health insurances (we talk about the obligatory part, not additional insurances) premiums are mainly dependent of the region you live in. afaik there are for example 3 price regions for the canton of zurich. in this regard it’s the same as taxes: move from zurich to zollikon to reduce your community tax from 119 o 82%. depending on your residence, this might be a 10 meters difference.

afaik they don’t depend on age.

within the same insurer, the frenchise and the tariff model greatly affect your monthly premium.

btw lol@google for this search result: 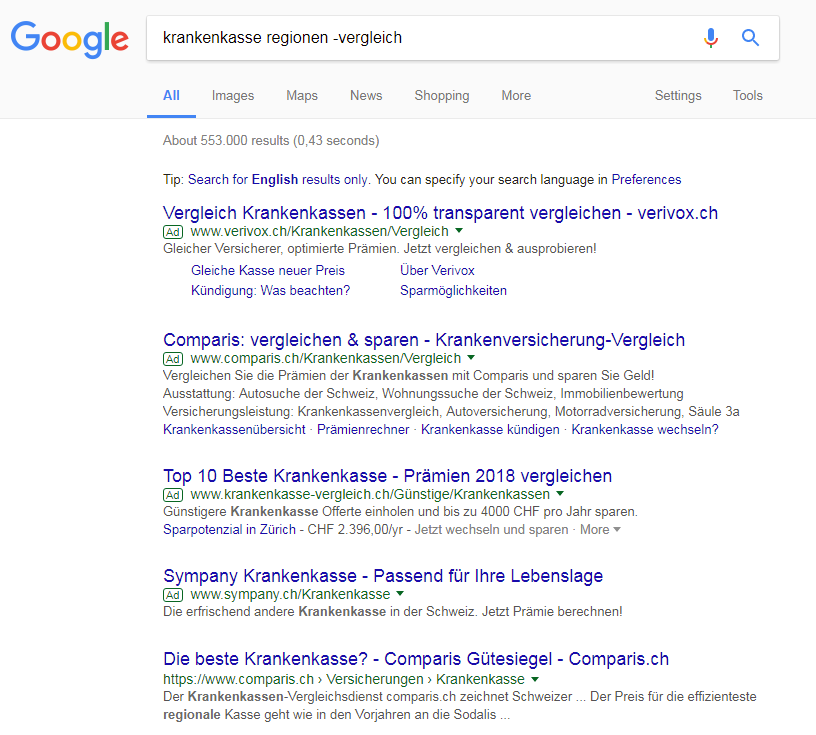 Why comparis et al. asks your age if it doesn’t depend on it?

kids have also other deductible choices

Just how often do you need to get rescued?

AFAICT supplemental health insurances are not worth it unless you have a special situation or no emergency fund. That can be generalised to most kind of insurances too.

thanks for the numbers. i still think for me it’s good, but the details are more private than i’d post publicly

The issue with supplemental health insurances is that when you want one, you won’t be able to get one or at a huge cost. Insurance company do not have to accept you if you will cost them.
And for me the main difference is not so much the money you get back but the flexibility of choosing the hospital in case of big health issue (transplantation, paraplegic, …)

On top of that, you can just choose the cheapest supplemental health insurance of any insurance company, you don’t need to have it as the same company than the mandatory one.
For my case, I am at Groupe mutuel and pay 21.50 per month for this.
It gives me back:
50% of dental care per year, in average ~150
200chf of glasses per 3 year
Which brings the yearly cost at max 42chf.
To which you can add a few things which easily bring it to less than 0 (vaccine, checkup, fitness…)

In my opinion, the simple fact of being able to choose the hospital in a few year when needed can be worth this sum.

If the choice of hospital/ward matters to you, by all means do get supplemental insurance. It’s kind of hard to put a monetary value on that but if you think feeding your insurer 42 CHF per year for this is worth it, go for it. However I also assume your premium raises with age regardless of when you first registered and you need to stick with it for many years to benefit from it so it’s not just 42/y. As for the other extra I doubt very much most people actually make use of them sufficiently to bring the cost down under zero (well, I am sure of it, otherwise the insurer would be losing money) but again if your situation is special in that way and the insurer didn’t exclude you, good for you.

Personally I make the assumption that I will still receive adequate care with the basic insurance and I don’t really expect to stay in Switzerland when I get older and may have to spend more time in hospital.

I just checked the group mutuel website for the supplemental insurance. It’s a bit messy. If I select something, it ask me if I want to deselect something else, which if I trust the description, seems unrelated. Picking which doctor (and room type) has nothing to do with complementary medicine and eyeglasses…
It’s messy. I wonder if it’s possible to write a table with all the insurances and combination for the KKs. I’m not sure if it’s doable though.