Have you or anyone you know gotten one of these 1 EUR houses in Italy?

I am talking about these: 1-euro Houses - 1€ Houses — Cheap houses in Italy

It comes with a few conditions (most notably, invest a minimum amount into renovating it)

Have you or anyone you know used that scheme? What was your experience?

I have no experience but a very strong gut feeling that there are no real bargains to be made.

Not considering this as an investment but more like a potentially good way of getting a vacation home for a good price.

I think that you have to move there with your family to get it for 1€ or did I miss something?

I guess every (god forsaken) village has its rules. But yes, moving there permanent is usually required plus renovating the place (which is obviously in a state of ruin).

Main issue is these are places where you most likely don’t even want to go on vacation; in case there is an exception it’ll be gone long before you learn about it.

It’s just not worth it. With the money needed to renovate the buildings you could just buy a decent one in any small city in southern Italy.

Probably - though it’s not rare that places that are “en vogue”, where many people want to go on vacation are overrated. Especially when you consider it in relation to the costs.

I am not hipster tourist who feels compelled to go where no (European) man has been before. Neither am I chasing “hidden gems” - but I do find it’s often quite interesting to stray from the beaten path and go into the countryside.

I think the main issue for many of those towns with declining and aging population will not be that they are necessarily hideous or their surroundings barren. Or necessarily the quality of life. I guess the main drawback of these places are abysmal local economy and job market.

…which, however, could make some of them interesting as an affordable European basis that’s not too far off to, doesn’t require air travel and isn’t too culturally different. Particularly for teleworkers (semi-) retirees, or location-indepentents, who aren’t tied to a particular location or big economic centers, due to job prospects - as most “normal” people are. And as such maybe Mustachians as well.

You most definitively should have no qualms about living in a quiet place without the hustle, bustle and cultural attractions of city life, though.

I am considering moving to such a place - albeit only temporarily, not in Italy, and I probably don’t want to own my own house there but rather rent.

In a similar theme, I was wondering where in Switzerland can you find a town “off the beaten path”, that’s still beautiful and with amenities. In Zurich the prices are pumped by high population density and high salaries. But once FIREd, I don’t have to be in Zurich. I’d just like to be somewhere close to civilization (good connection to an airport and a city), close to a lake. That it feels like constant vacation in your own house.

Sadly, your criterias, to my knowledge, describe exactly the most expensive places in Switzerland. But hey, anything is pretty well covered with public transportations so it may well be possible to find that with some adjustments.

Yes, you pay more for good stuff. I’m just saying that after FIRE we don’t need to live where they pay well, or where there are many people. Continuing to live in Zurich would be a lifestyle choice, but not a economically optimal one. So I’m wondering which region would be not so prosperous, but still beautiful and possibly not belonging to the all star tourist attractions like Zermatt, St Moritz, Davos, Klosters, Gstaat.

Not answering the question directly but Valais/Wallis has three types of incentives to get people to live there, depending on places:

I’ll try and see if I can be more specific on the topic, you often have to inquire in the Gemeinde directly, it’s not advertised very openly.

ETA: All in all, while nice, those measures are relatively small in regards to the costs of construction.

Interesting article from CNN on the 1€ houses 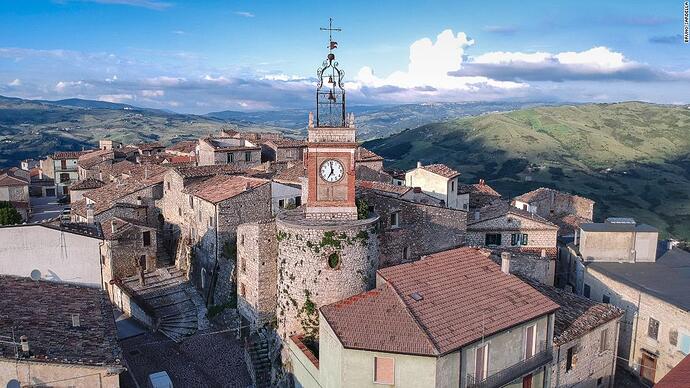 Why not everyone is happy with Italy's €1 homes bonanza

Dozens of Italian towns selling abandoned dwellings for little more than a dollar have created a bonanza among enthusiastic buyers. But what happens when someone doesn't want their family home being sold?

At the top of the renovation costs, looks like it can become a legal nightmare too.

Being invested in Italy? Completely impossible!

Probably somewhere in the mountains, where you’d have a very long commute to get to work.

I often see “cheap” houses in Graubünden when I search for something near Chur, because it includes all those small villages high up in the mountains which appear close just by looking at the distance on a map.

And they are oh-so-friendly with certain foreigners

At the top of the renovation costs, looks like it can become a legal nightmare too.

I can confirm the legal issues, not impossible but requires proper due diligence. Most properties are tied to heirs of the deceased, and there can be quite a few, and they all need to be in agreement to sell (notary costs can be borne by the buyer).

Source: have some family members in the RE business.

Did you ever take a look at the canton Glarus?
I grew up and still live in Glarus, so my opinion is heavily biased

I think it’s a beautiful place, there are countless opportunities for hiking and some of the most beautiful lakes (e.g. search for Klöntalersee and Obersee, and also Walensee is nice).
The connections with public transportation are quite good, there’s 2 trains every hour to Zurich mainstation around 50-60 min travel time and 30-40 min to Rapperswil.
Taxes are average, a bit lower than Zurich. Rents are pretty low compared to Zurich, e.g. you can get a new 4.5 room with approx. 130 sqm for 2’200 a month incl. Nebenkosten

Glarus rates high on my list. I’ve been to Klöntalersee, the steepness of the mountains and their closeness to the lake make a great impression, Walensee has amazing colors. I took the Klausenpass and had to wait for some cows to get off the road. Braunwald is just one of the place that I love, a “town” in the mountains with no car access (similar to Rigi Kaltbad and Stoos).

I personally like the Vierwaldstettersee and would consider places like Arth-Goldau, Brunnen, Fluelen. I like that they’re close to a major train line, you’re not far from Zug or Luzern, but also a tunnel away from the sunny Ticino. But I have not found even one interesting property to buy in these areas…