Just watched a very interesting video from Mission Money about the future house market situation in relation of the future demography scenarios (in German language). Of course this study represents Germany, but gives some insight information, I was not aware yet.

As I’m not a German speaker - can someone please summarise it in 2-3 sentences?

Remember this is an analysis for Germany (and maybe valid also for other bigger countries in Europe). Maybe not that much for Switzerland as cities and villages are in close proximity.

less children in villages
e.g. schools/hospitals will be merged (with other structural weaknesses)
no new families will settle there because of that
only older people stay and the area becomes more and more uninhabited
in those areas there will be no real estate market, because nobody will buy

That +1,4 children per woman means that that the society will shrink 1/3 per generation (which is huge!).

Comment OogieBoogie: Just google “buy house italy for $1” with a similar situation and how states react to that uninhabited parts of the Italy. Also visited a friend in Madrid who had a weekend summer house offsite of Madrid in a village. This village had in the past 500 people 40y ago. Now there was 1 guy (78 of age) who was a Shepard and took care his sheep and goats.

Marked in red the baby boomer. 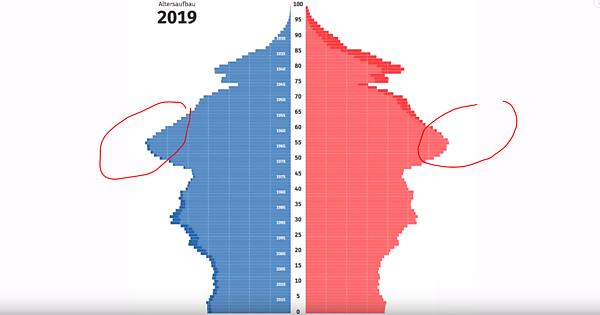 Perfect, many thanks. This is in line with what I’ve read/observed already. Depending on the country - the solution for shrinking societies may be immigration. In fact, it can be seen currently in Poland, where lots of Ukrainian people helped to pump the housing prices (but saved many Polish small businesses I guess). As far as I know not because they buy (so far), but because the rents go up. I’ve also heard that for example Japan opens itself more and more for foreigners, because of ageing society.

Curious how it will look for Switzerland in long-term…