The concept of «Food waste» refers to all the food that is wasted or thrown away throughout the whole value chain, from the field to the plate: in agricultural production, in the processing industry, in the catering trade, in the big supermarket...

Apparently we waste 330kg of food per year. Some household there is probably wasting 630kg, because I’m sure I don’t waste more than 30kg per year (and that is an upper limit imho).
If I waste 30kg of food, I can classify it like this, with very shitty estimates (just to start the topic):

Did I miss something? Maybe I can round it up to 1kg per month. I really don’t understand how can a family waste almost 30kg of food per month. One kg a day. I think they might have taken retail food and split with some rules, even if it has its own category.

Imho the whole concept of “food waste” is nonsense. Food is a consumer good, just like anything else on the world. Sure it has tax advantages and gets subventions (for obvious reasons), but that’s it. No child in Africa is going to live longer, if we don’t throw away stuff.

The alternative would be a food shortage, no desired scenario imho. And 330KG sounds like a lot, but I bet it’s not that much. Considering that most food waste happens inside the food processing chain.

You didn’t check the link. the 330kg is only per household. The category “Wholesale and retail trade” wastes less, apparently. I don’t believe it.

It’s not that it’s nonsense, it’s that it is not correctly presented. If you see that there are 100 tonnes of meat that is wasted every year, you can start producing less meat, for example. This is of course not on the household waste list. For household the only thing that makes sense is to learn being less picky and maybe learn to eat what you have instead of that feeling I-dont-feel-like-eating-asparagus-again-this-month attitude that some people has (or I suppose they have…)

What I meant is that Households are one part (approx. 40%, which is imho not understandable, but ok… apparently people like to burn money) and 60% is processing + retail waste.

I newer throw away stuff that doesn’t smell or taste bad, so I am not the one causing this. But I mean if you want to burn your money… why shouldn’t you be able to do so? If we want to produce less meat, meat needs to be more expensive.

I understand but this reminds me what i’ve read about subventioning electric cars. They said it was a tax on the poor for the rich, since EV are (were?) mostly bought by rich people. Of course also rich people pays taxes, but the idea make a bit of sense.

If suddenly meat is more expensive, “poor” people will complain because only “rich” can eat it. If instead we check all how much meat we need and produce only that more or less, no one should theoretically complain. In practice, meat will cost more

Yeah, but that’s how life works… There is afaik no human right to eat meat 7x a week. So if you can’t afford it, just don’t buy it.

I’d even do a double sided approach - so taxing meat and lessening taxes on other, more healthy food. I hear nobody complaining about private jets or yachts being to expensive

I worked in a restaurant where we did a food compost for our plants plus a no waste stock with all the veggies and shells, maybe could be an idea

Did I miss something? Maybe I can round it up to 1kg per month.

Also to mention is, that they differentiate between avoidable and unavoidable, where the latter is - "Unavoidable food losses are, for example, parts of food that are not edible or are considered inedible in our culture."
The 100kg per person p.a. household waste is only “avoidable” waste acc. to the table titles.

Your bones, onion outsides, salad stem and eggshells are unavoidable (in our culture), and not part of the avoidable waste.
Your only avoidable waste would be the stale bread, so with 30 or 45kg of household waste you have massively overestimated your avoidable waste IMO.

Frugal people will have similar minimal waste amounts. I think it’s “easy” to reduce avoidable waste to almost zero, with the right mentality. I think it’s still admirable for the people that do, but it’s not thaaat difficult.

But I can clearly see who drives the averages upwards, and how, some examples:

All-in-all food has become too cheap in CH, or more significantly it has become a too small part of the monthly budget (on average around 5% of income, or up to 10% of fixed expenses) to think about the value lost by wasting it “just for fun”.

Our grandparents certainly wasted much much less.

Unfortunately supermarkets and their marketing will never fight the waste, since more waste = more revenue.
On the contrary they always come up with new concepts which are usually pretty and convenient, but wasteful. 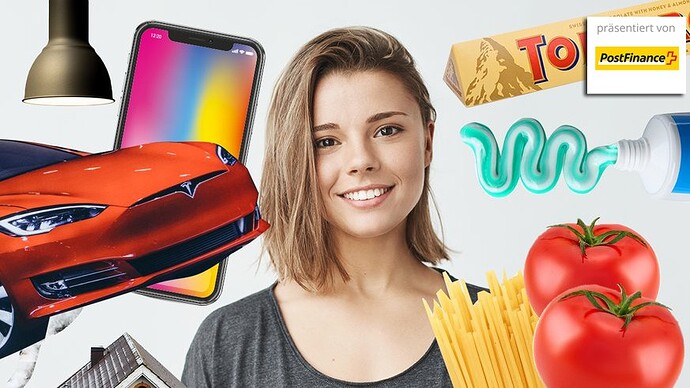 This is insane, I’d like to meet a person that throws away 270g (or much more since this is avg; and apparently only “avoidable”) of food (or remnants thereof) per day.

It could be though… I know people that always try new recipies straight from some random Youtube video, and then end up throwing half of that away because it didn’t taste good.