I am really ignorant in how finance works. I thought:

Apparently I am wrong, at least if I check the charts for yesterday, where I see a hike, probably around when the fed announced the changes.
Did I misunderstood something?

Market anticipated a 100bps increase and priced that in. It was only 75bps so markets went up.

When the interest rates goes up, stocks should go down.

It went down already.

The market always look ahead, just like earnings report:
For example; the investors expect huge losses, the stock already looses value, earnings get published; even if they are bad, we knew they were going to be bad, so now we can expect the next earning to be better - rally.

Same works for positive earnings, this is why a stock often tanks after good earnings result, investors sometimes don’t believe the next earning will be better so the future value is smaller, ergo dump.

In this case the market expected a 0.75 or even a 1% hike, so a 0.75 is bullish since now we believe that the worst is over and we get close to quantitative easing again…
I think even with a 1% hike the markets would not have dumped, everyone knew the hike was coming and sold in advance, so there where no sellers left.

Both are correct, but I think the missing part is that stocks already went down weeks before the meeting. The expectation of a 75 or 100 bps hike was already priced in.

The stock rally after the meeting was because the fed took the lower end of the interval, which is (relatively) bullish. If they had hiked by 100, the stocks would have sunk.

Market anticipated a 100bps increase and priced that in. It was only 75bps so markets went up.

Or maybe because Powell said that 3.00-3.50% will be end of this big increases

I agree, in the extreme short term single rate hikes might be relevant, but in the long term (more interesting for us buy&holders) i think it all comes down to where rates end up.

Also, rates are not as important for some companies / sectors than for others, but again, for us super-diversified investors it won’t matter too much. No direct correlation historically between rates and stock prices I think.

However, I love to follow macro debates myself, always trying to keep myself from market timing

correlation historically between rates and stock prices I think.

actually finding a direct correlation between interest rates and inflation is also not that trivial. It seems that the equilibrium demand/supply is much more important in that regard.
And right now, demand is high, supply is short, companies are making BIIIIIG profits.

From my point of view, there are a couple of things to take into account:

So the reaction of the stock market must be seen as if they believe to have a fed put again, and hoping for way more liquidity again once the pain will be felt in the economy. I’m just not sure this can happen as long as the inflation stays high - and inflation tend to be way more sticky than often predicted by central banks. … but as always… who am i to know anything

Looking at some US big companies, I have the feeling that most are already pricing in a recession in their labor forecast (i.e. hiring freeze, planned layoffs, restructuring, etc.).

I’ve been surprised by the reactions of the US market to the news of the week and still don’t have good explanations for it other than delusion (which is a poor “explanation”, so leaves me unhappy with my understanding). Last time we had a “big” rally during this downturn was the end of march, with quarter end and earnings, so that may have had an impact.

So down from previous expectations.
Using the CME FedWatch Tool to get numbers (it’s worth what it’s worth, methods for creating data on the future are, in the least, imperfect).

Edit: thinking more about it, I think the market expected a very, very, hawkish FED and the announcement by JPow that they had finished their frontloading phase and would be data dependent moving forward had them go down to just a very hawkish FED. The reactions to the GDP reading (coming out lower than expectations) would have put the FED even lower on the hawkish ladder in the eyes of market participants.

I guess I was seeing the FED as less hawkish than the market was and that we now are mainly in alignment. We may have the same (totally unreliable) reading of what data lie ahead.

This explanation appeared on “Fintwit”: 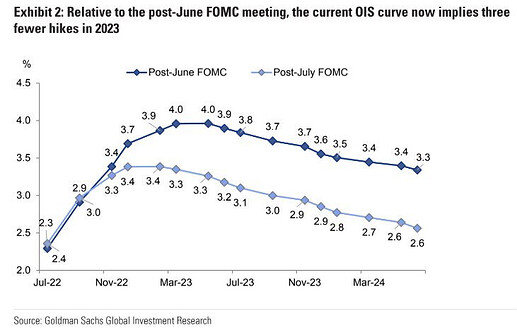