E yuan: what is that?

Hi, anyone has info about this new chinese currency? Can it be an issue for the dollar in the next 10-20 years? Could it be a new type of bitcoin, with all its pro and cons?

The official name is digital renminbi. It is aimed at replacing physical cash and competing against wechat & alipay.

As you might know, China is years ahead of the rest of the World, when it comes to digital payments. Every weird little shop or street stand has a QR code, which you can use to pay with your mobile phone, some even don’t accept cash. There are two apps, which allow this: WeChat & AliPay. They are something like TWINT.

Now the Chinese government introduces its own system, I guess in order to offer an alternative to WeChat & AliPay, and maybe to get rid of cash altogether. With a digital currency, you can easily see how it changes hands, it makes illegal activity more difficult, it’s a great tool for increased surveillance. Basically, another Black Mirror episode.

It has nothing to do with bitcoin or cryptos. I think it is unknown if it uses any blockchain technology at all. 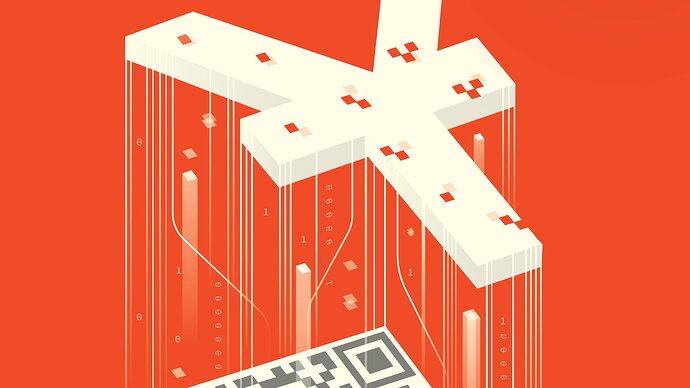 How China’s Digital Currency Could Challenge the Dollar

Over 60% of foreign bank reserves are denominated in dollars. China's digital RMB could challenge the world's currency

Some people believe it will challenge the dollar though.

I know this sounds crazy but I imagine ~2040 like that:

All major currencies (USD, EUR, CHF, GBP, Yen, Renmimbi) won’t be physical anymore. Central banks will have total control of money supply. They will start implementing things like expiration dates or limitations where and when money can be spend/invested.

Inflation too high? Just block money from being spend/invested for 3-12 months after receiving it. Recession around the corner or already in the middle of it? Reduce the expiration date of money down to 12 months. The possibilites are endless and on a totally different level than today.

Nice article. For me, this paragraph is crucial:

Digital currencies will help governments fight malfeasance, smooth the transfer of assets across borders, and enable central banks to deal directly with citizens—especially helpful in times of crisis. The widespread adoption of such currencies stands to slash the operating expenses of the global financial industry.

So it cuts out the middlemen. Banks, foreign currency exchanges, international currency transfer and settlement organisations (SWIFT, Western Union), fintech companies (Revolut, WeChat, AliPay), all of these institutions make money by providing services built around money. They also digitize currency on behalf of the central bank. If the central bank can cut them out and provide the currency directly to the endusers, this will cut cost and weaken banks etc.

They also can “print” money with an expiration date. Let’s say the government gives you a “stimulus check” of $1’000 that you have to spend within the next month. And they also control, what you can spend it on. Sounds like too much centralized control, for my taste.

The possibilites are endless and on a totally different level than today.

People then could resort back to exchange goods for gold (or other materials) or at least to store value so it doesn’t expire.

If you think about it, the central bank already has tools to control inflation. It can regulate money supply indirectly through interest rate. I don’t know, maybe putting expiration date on money is somehow more efficient than raising the interest rate. In both cases, money disappears from the system. Although, I’m not sure what should happen with this timebomb money once you’ve spent it. Does the clock get reset for the business, which sold you the product?

Russia and China would also prefer to settle accounts directly via digital currencies. […] the U.S. has […] twice put pressure on the SWIFT banking network to block all transactions with Iran, for example.

I wonder, what’s the deal with SWIFT. Why do all international transfers have to go through it, and why does every currency pair have to be cross-converted through USD? The word “digital currency” implies, that the CHF I have in my bank is somehow not digital, yet we know that these are just numbers in the system. So how is one of these currencies digital and the other not? And what would stop a commercial bank from “transferring” (i.e. booking separately in two systems) an amount between two countries, skipping the SWIFT system?

Central banks will have total control of money supply.

I don’t really see commercial banks disappearing, and I don’t think any major central bank is suggesting that. As long as commercial bank exist, they’ll also change their balance sheets and influence the supply.

Here’s a nice chart from Wikipedia: 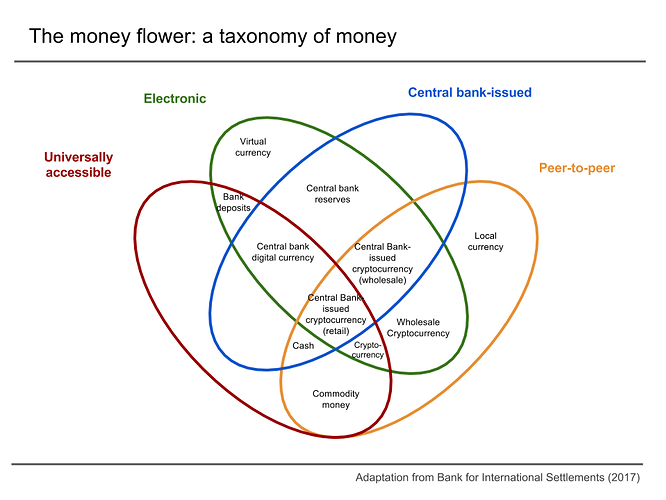 So, yes, it seems like the digital renminbi is a “central bank digital currency”, which works like a bank deposit, but without the need of a commercial bank. And a central-bank issued cryptocurrency would make the digital cash, allowing “offline” transfer of money between two peers.

I wonder, what’s the deal with SWIFT. Why do all international transfers have to go through it, and why does every currency pair have to be cross-converted through USD?

Because it has a monopoly in the global clearing house space for bank transfers, and uses the USD as its basis for transactions.

The word “digital currency” implies, that the CHF I have in my bank is somehow not digital, yet we know that these are just numbers in the system.

The CHF in your bank account is simply a debt claim, or what is called book money. Private banks have been prohibited from issuing their own currencies since central banks were given the monopoly on base money a century ago. Currently, the only way to hold base money is in cash (apparently some fintechs like Yapeal only hold base money, but you as the customer are not the legal owner of those AFAIK).

Digital base money would have to have the same characteristics as banknotes and coins, i.e. “Money is a matter of functions four - a medium, a measure, a standard, a store.” It has to be hard to duplicate and must be able to function independently of one service provider, and it has to be fungible. So far that has been impossible to replicate with a digital currency, which is why a credit card payment involves a myriad of financial service providers (issuers, merchant acquirers, clearing houses, etc).

Blockchain technology could solve some of these issues, but with current cryptocurrencies at least, fungibility is an issue. For example, if I give you a 100 Swiss franc bill, it doesn’t matter whether that bill was used to buy drugs at some time in its life. You still have 100 francs. With cryptocurrency, on the other hand, each transaction is recorded, so a currency unit can be linked to illegal or socially unacceptable transactions (or transactions which may meet that criteria in the future), so you end up with “good” and “bad” coins. Nobody will want to accept a unit as payment if it may be confiscated or otherwise cause issues for them in the future. So I can see how in China this kind of project could be pushed through, since the economy is more or less centrally planned, but for “free-market” economies, it will take a little more ironing out.

Thank you for your explanation, it definitely helps. (btw. Moneyland is a really cool website)

Private banks have been prohibited from issuing their own currencies

OK, but they can issue more of the existing currency, by issuing loans, right (maintaining the fractional reserve ratio)? Hence the M1, M2 monetary base. What difference is there in practice between book money and base money? I can pay for stuff from my bank account, or with my credit card. It’s all digital money, not physically existing anywhere.

Yes, that’s they are the so-called tainted coins. That’s why some argue that a truly fungible crypto is Monero, where you cannot trace the origin of a coin.

Because it has a monopoly in the global clearing house space for bank transfers, and uses the USD as its basis for transactions.

I admit I have no idea how international settlements work. But let’s say I’m China and I want to buy some gas from Russia using CNY. The Russian Gazprom has a bank branch in Russia and China, so does the Chinese government. So the Russians send some gas to China. The Chinese pay the Russians in CNY, which the Russians can then spend, e.g. on Chinese products. Why does this action require SWIFT? Why can’t they just do it bilaterally?

To this I can add, that I heard that Gaddafi and Hussein were both overthrown not because they had chemical weapons (which was a pretext), but because they wanted to start selling oil in EUR instead of USD, which the Americans didn’t like at all.

Why does this action require SWIFT? Why can’t they just do it bilaterally?

It doesn’t require SWIFT, I guess SWIFT makes it simpler since it automates it? You could always pick up the phone and do the correspondent account swaps yourself. (I also don’t think that SWIFT means using USD, it’s just a protocol, tho it’s true that in other currencies there are other competing protocols so people don’t use SWIFT for EUR when they could use SEPA).

The issue is more what to do with the money as an exporter, you don’t want to buildup a surplus reserves in a non-major currencies.

It can be done bilaterally, which would pretty much amount to a sort of peer-to-peer system. But it would have to give better value than the established SWIFT system. As a clearing house, SWIFT guarantees payment so that international transfers can be made immediately and then settled later, which is very convenient. A possible selling point for a new system would be to eliminate the SWIFT fee, but that implies that the alternative would have to be cheaper. In your example, the main issue would not be SWIFT, as a big order would likely warrant the hassle of brokering a special payment arrangement, but the fact that the market for gas is (currently) priced in US dollars.

I like Monero, although I remain curious as to whether a digital currency can ever be fully fungible. As I see it, were decentralized cryptocurrencies like bitcoin and Monero to become widely adopted, that could drive a free decentralized global economy. The alternative is the CBDC, which would by default be a move towards a more centrally-planned economy.