Does margin interest rate trading switch you to professional trader?

Does anyone know if for example market drops with 30% tomorrow and I would like to use margin loan from IB to buy cheaper securities… Would it make me a professional trader at the tax office, because I am using external loans to buy securities?

Long answer: Probably yes, or how do you intend to convince the tax authorities that this is not the behaviour of a professional trader? Search function will also bring up many threads for this topic.

I’ll twist the question. What if I invest only up to 1.00 leverage, but then cash out on margin. Am I a proffesional trader, or did I just take a loan?

Variation of the question: what if you buy some 3x leveraged s and p 500 etf ? Does that make you a professional trader?

@Bojack: Tax authority (TA) will neither realize nor care that you technically are trading on borrowed money until settlement. In general, as long as you have the money elsewhere (different account, cash, about to be settled) you are much less at risk to being classified as professional trader. I’d say: No risk.

@glina: Certainly you would be at a significant risk. This also goes the other way: Borrowed money can also be a personal loan or even a mortgage in specific cases. In the later however, it would have to be really obvious, e.g. increasing your mortgage and shortly thereafter buy shares for a similar amount. TA will judge on the overall situation, so as long you can explain your actions reasonably, your good. In your case, if you are taking out cash on margin to buy a car you have seen this very moment, when two months later your bonus clears with roughly the same amount you are probably fine. If you pay your rent and food with that cash on margin, you’ll have an issue.

@IdleThought: I’d say very small risk in general, also because TA will not even notice. Then again, if you invest a majority in leveraged products, TA might become suspicious and it would have to be discussed if those products are part of a usual investor’s asset universe or not. It’s again about pushing it too far.

In summary, trading on credit is the most major indication for being a professional trader. However, the law requires the TA to rule on a case-by-case basis, so you’ll always have the possibility to explain your actions. One exemption with less exposure is even listed: Borrowing money at a rate lower than your taxable returns, e.g. borrowing at 2% to buy a stock with 3% dividend.

One thing to keep in mind: This is the German definition of a professional trader as ruled by the federal court and listed in ESTV Kreisschreiben 36:

A professional trader is someone who buys and sells securities beyond a simple private wealth management, and exhibits a systematic activity that in its entirety is targeting to generate profits.
By this alone, nearly every reader on this forum that is not a buy-and-hold strategy enthusiast probably meets that criteria. We are therefore closing the loop and are back on square one: The tax authority only cares about the big fishes, so just keep your heads down!

To end the wall of text with a community challenge: Who finds the ruling of someone declared a professional trader with the smallest possible amount in profits?

I dabbled with options last year and ended up getting assigned twice in December so I was 40k in the red. I’ve covered that gap now but I still had to mention it in my tax declaration. As far as I know, I’m not considered a professional trader by the tax authorities.

In my opinion, those concerns are overblown. Put yourself in the tax office employee’s shoes: They see a guy like us earning 100k a year, paying maybe 15k in regular taxes. That guy bought 30k of index funds and sold maybe 1k to rebalance or whatever. Are they really going to go after that guy for 15% of that 1000 chf? That’s not worth the trouble…

Now if they see a guy not working and getting 20k in dividends (taxable) and 40k in securities sold (in theory not taxable), you can be sure that they will qualify him as a professional trader, if they can, because there’s a lot that they’re losing by not doing it…

I used to work with a guy who was working and didn’t make huge money on investing, but he still was classified as professional trader because doing algorithmic trading on options. Maybe it depends on canton’s TA policy or maybe just on case. I’m not sure what was the rationale of this decision. The TA certainly wasn’t collecting lots of money from his capital gains.

I mean… sure, algorithmic trading on options is as professional as it gets

No, wait, that’s actually not true: algorithmic trading on futures commodity options is as professional as it gets. But your friend is pretty close…

And you’re right, it does for sure depend on the canton’s policy and there are overzealous employees everywhere.

My point is that even if they classify you as a professional trader, you only have to pay taxes and AHV on the amount that you sold. And that shouldn’t be much in the accumulation phase.

If you borrow at 1.5% at IB, you can be sure that the dividend you recieve will be higher than the interests if it is a distributive asset. If you meet that criteria, just make sure to meet the 4 other criterias and they won’t be able to classify you as a professional trader.

Do we have a definite answer on the leveraged ETF question?

I want to implement a strategy that includes holding a daily 3x bull etf with 10% of my assets.

I want to implement a strategy that includes holding a daily 3x bull etf with 10% of my assets.

That very statement reads like coming from a professional trader.
Does it (implementing that strategy) guarantee you’ll be considered one? Probably not.

I think its human nature to speculate

. Not a professional trader haha.

Equipped with youtube, robinhood, and r/wsb everyone can become a professional trader in under an hour.

If you are holding it and the tax office decides that you are a professional trader, what would they tax you on? In my opinion you don’t make any taxable profit as long as you don’t sell it but I might be wrong.

Backtests say otherwise. It’s veeery volatile, but will probably be worth it longterm.

On the other hand if the intent is to daily trade this ETF then I’m pretty sure the tax authority will have something to say about it.

The ones on and conveniently starting with the unprecedented tech-fueled US bull market of lately, you mean?

Going to a more “normal” performing market, we can compare

PS: Granted, that was shortly before a bear market, and if we’d start out three years later, the picture would reverse, with the LevDAX product beating the unleveraged 280% to 160%.

PPS: Or doing this for Emerging Markets ETF (from ETF inception, I’m lazy to backtest): 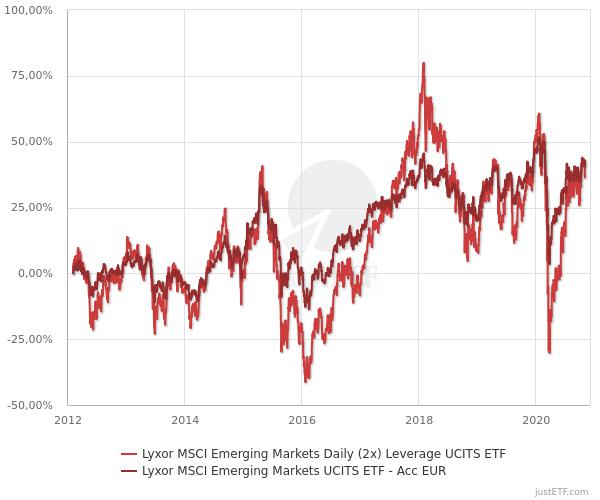 (That’s me having chosen “conveniently” the end date, for purposes of illustration, since the leveraged fund has overtaken the unleveraged fund by 15 percentage points over the last 5 or 6 weeks)

but will probably be worth it longterm.

So why is everyone here so religious about VT?

At least did you put your money where your mouth is, with that overperformance of daily leverage?

Does anyone know if the professional trader sticks to you forever or is this evaluated yearly?

Well, basically I went pretty active this year and probably satisfy most of the criteria to be called a professional, with the exception of trading options.

The thing is, I do not have any capital gains that could be taxed. I’m accumulating all the winners and cut only the underperformers. I also use margin, but I have just enough dividends to cover the interest.

What’s in store for me in this case?