Difference between VTI and VT

what is the difference between the two?

Because I saw in this forum someone recommended VT and also @_MP himself has invested 55% of his portfolio in VT.

What do I miss here?

And the difference between VTI and VTSAX is, that one is a mutual fund and the other a ETF. But for long time investors like us, that doesn’t make a difference?

VT is the global stocks universe ETF
VTI is the US stock universe ETF
VTSAX is the Index fund version of VTI, as such not available for non-US residents
VXUS is the exUS stocks universe, and with the right combination (44:56) with VTI, it should be close to VT. however, the number of stocks underlying these funds d not add up, 3573+6171 != 7788

no, usually it would not make a difference ETF <=> Index fund: the underlyings are identical, as well as TER. However, only the ETFs are available to us swiss investors.

I know, I should not only compare the TER, but they seem not that different in performance.

VT is made up of about 56% VTI, the rest is internatinal stocks. they are quite different indices (i guess you got something wrong here…)

TER is important, but as you state, one of several important properties of an etf

(i guess you got something wrong here…)

My bad, I just looked at the top 10 largest holdings of the two ETFs. Still have to learn.

There are two schools of investing:

I personally invest in VT, as I find more internatial diversification worth the cost. I don’t know what crazy stuff might happen to US in next two or three decades, so I feel safer with keeping only 50% of my investments parked there.

the other school (JLCollins recommends that for instance)

That is funny. I just found a guest post on his blog for European investors and there they also recommend the VT over the VTI. (Article here)

VT is a lazy one fund for all world equities

If you’re less lazy, you could go for something like VTI + VEA + VWO + VSS. Overall, the mix has lower fees - but they’re already so low that taxes and maybe tracking error are a much bigger concern. These funds are quite a bit bigger and more popular and liquid than VT. You can tune weighting to your personal preferences - maybe you’d want to overweight or downweight or exclude EM and small caps altogether (in the latter case then maybe also consider large cap VOO instead of VTI). All funds are market cap weighted, so there’s no need to rebalance within the mix after initial investment. And you could also shift if you want some parts to IE domiciled funds if you find that tax beneficial for you, without having to liquidate whole VT position. For US equities, it’s better to stay in a US-domiciled fund for tax purposes.

I have a better question actually: VTI+VXUS or VT?

VTI is a much bigger fund than VT in terms of assets under management, and likewise VEA/VWO/VSS are much bigger than VXUS.

Just checked Vanguard’s site
as of end of May 2017 the fund sizes were as follows:

how come it is bigger?
or I am looking at wrong data?

AUM for all funds mentioned:

yes, it looks like
I was referring to this site
https://personal.vanguard.com/us/funds/snapshot?FundId=3369&FundIntExt=INT

While if I got your link right, it then should be divided in several sub funds, where VXUS is a part of this 280bln… Good to know!
Thanks!

Looking at fund’s report, it seems to me that “Net assets for <ticker>” (such as $8.4B for VXUS) refers to assets attributable specifically to ETF shares, whereas “Fund total net assets” counts assets for all types of shares in corresponding Vanguard’s mutual fund. So the latter could be used as a proxy for fund’s efficiency and tracking error, and the former for its liquidity

I just stumbled upon this thread and thought I might add my 5 cents.

It’s important to note that it isn’t a fixed 50%-50% split. It just so happens, that currently USA represents roughly 52% of the FTSE Global All Cap index, which is the index that VT follows. VT practically includes VTI plus a few thousands more companies. If the USA stock market grows at a faster rate than the rest of the World, the share of USA within VT will grow (and vice versa). FTSE Global is a market cap weighted index, so price changes do not trigger the need for rebalancing.

Regarding the question: US vs International, I think it’s worth it to retrack their perfomance over a long period of time. Here is a chart from the MSCI website comparing the total return of USA vs World ex USA (note that MSCI World includes only developed countries). 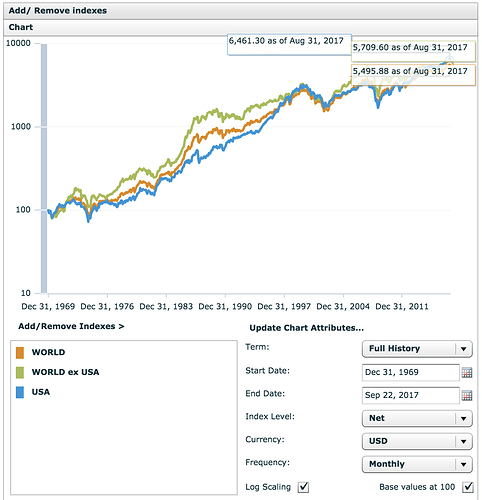 As you can see, the World ex USA has had a pretty good run in the 80s, but then the USA caught up in the 90s. Since 6 years the USA is constantly outperforming the World. In the long run, both indexes have performed similarly. But it takes a long time, decades, for them to realign. So if you opt for the wrong one today, you may wait another 20 years until it catches up.

The World Index, which includes USA, takes the middle road. I think it can reduce volatility in a very long period. That’s why I think VT is the safer bet than VTI.

VEA + VWO includes the same Small Caps as VSS. This said, I personally agree with the idea of adding a small tilt to international small caps and VSS is the perfect vehicle to do it.

Some reasearch would be required to confirm this, but as of now I believe that only the VWO out of all these funds includes China A-shares*. (from Vanguards page for VWO: “Goal is to closely track the return of the FTSE Emerging Markets All Cap China A Inclusion Index.”).

This would put its market cap at closer to 10-11% of global market cap (and will grow as more China A-shares make their way into the index).

*China A-shares are large cap shares traded on China domestic markets in local currency. They are gradually making their way to various (but not all) Emerging Market ETFs via China A-shares inclusion indexes.

Some reasearch would be required to confirm this,

@glina I have done the research (I think)

You mentioned “I personally agree with the idea of adding a small tilt to international small caps and VSS is the perfect vehicle to do it”. Can you briefly explain why one might want to add a tilt to Int small cap?

This is exactly why I wrote that only the VWO follows the China A-share inclusion index.
VXUS and VT don’t include China A-Shares which means their EM holdings are proportionally smaller.

Can you briefly explain why one might want to add a tilt to Int small cap?

This is exactly why I wrote that only the VWO follows the China A-share inclusion index.
VXUS and VT don’t include China A-Shares which means their EM holdings are proportionally smaller

Thanks so much for the chart

If I understand correctly small cap have produced an excellent yield - but they are high risk (higher risk than mid cap, and an even higher risk than large cap). If I am correct maybe I would just consider putting some “play money” into a small cap (or med cap) ETF.