Looking into some other finance blogs, I stumbled over this article which catched my attention (in German): 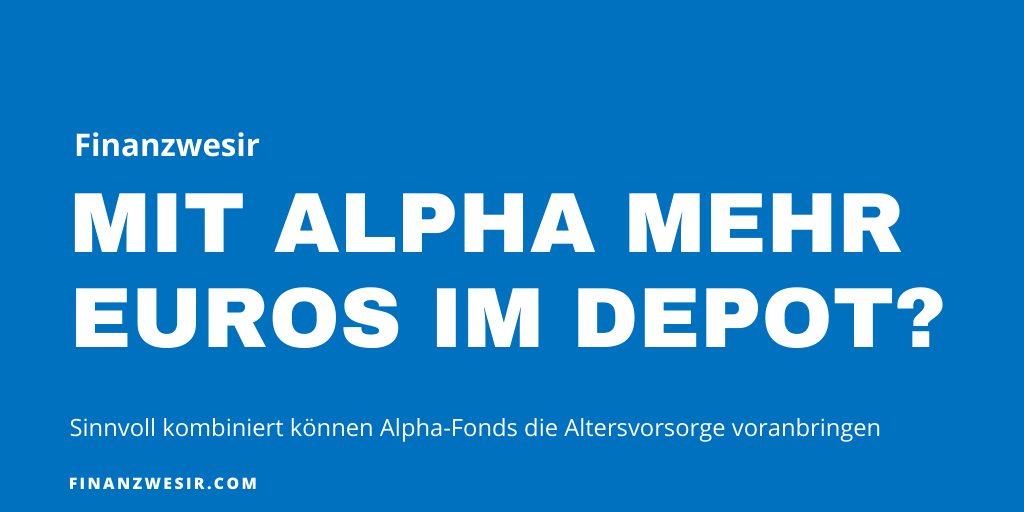 And I must have to say I think he has a point.

The article in short :
You can increase the performance of your portfolio by reducing the volatlity drag of classic equity ETFs by using trendfollowing funds, which are uncorrelated to the passive market (called Crisis-Alpha in the article). The more volatility, the better the trendfollower funds.

Practical problem : this trendfollower funds are using futures for practical implementation of this strategy, are rather expensive and ask for rather high initial deposits. Furthermore, it seems difficult to weed out the good from the bad. Finally, these funds do not like private investors, since they generate a lot of regulatory costs, at least in the EU, maybe less in Switzerland.

Did anyone of you implemented this type of strategy ? Anyone thinking this is just BS ?

In all honesty, I think the has a point, but it is rather difficult to implement due to availability of the funds (as well as the quality). Furthermore it is rather difficult psychologically, since in an upward trend you are always lagging behind, potentially for years. You only see the effect when there is a crash, but then it is jackpot.

For more detail how the trend followers are working, and that they are working well for a long time : 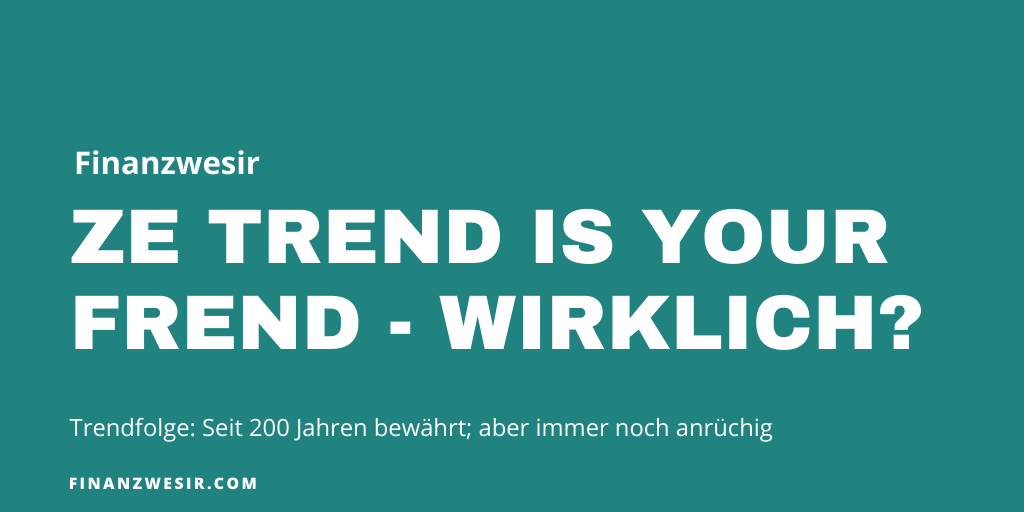 And how to find good funds : 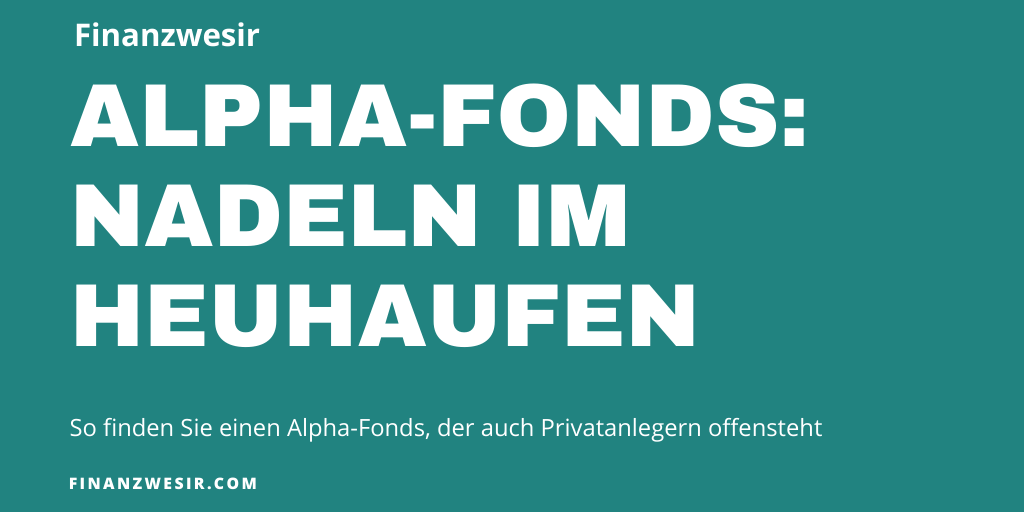 (all in German, could not find any equivalent in English which is readable in a short amount of time)

Disclamier : the author started its own wealth management using this strategy, but at no time is he telling to advertise his funds, on the contrary, he gives a lead how to choose the right funds on your own.

Themarket has a portfolio with a similar approach with publicly available ETFs that seems to slightly beat the MSCI world index/reduce market drag downs but stays within the MSCI world, so not totally uncorrelated: 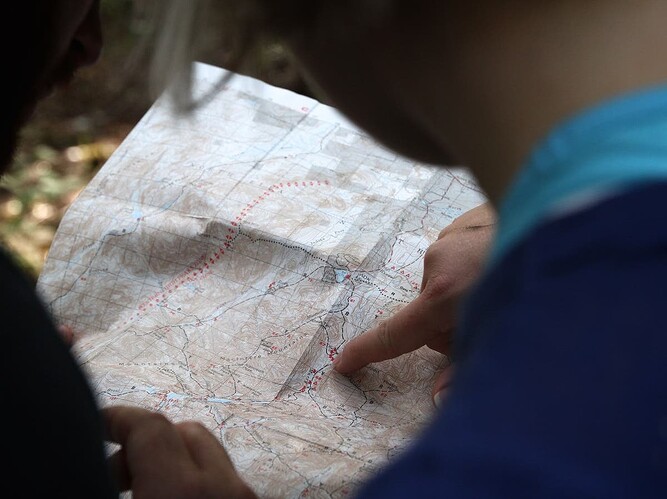 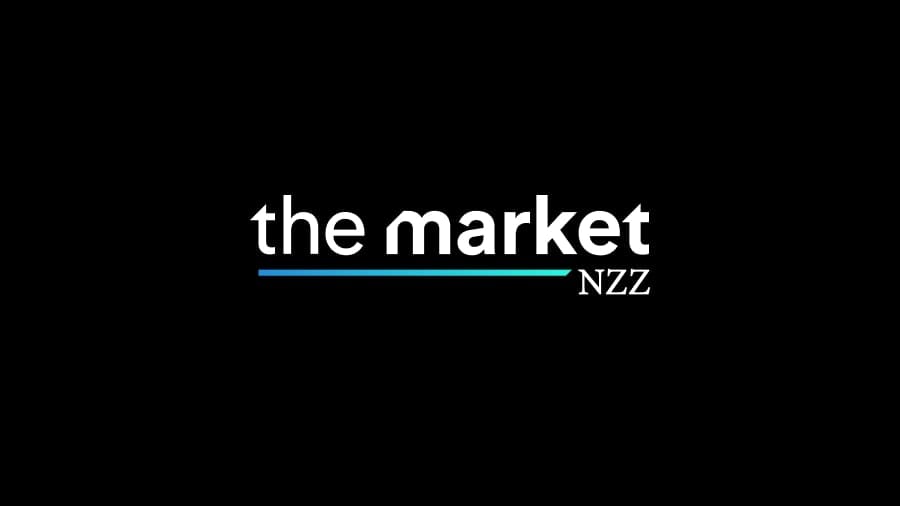 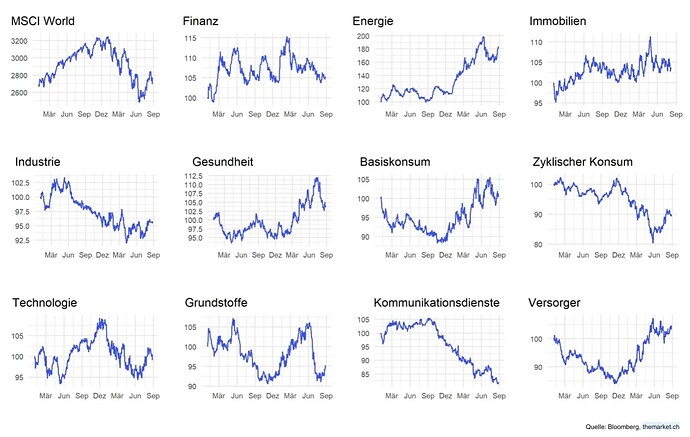 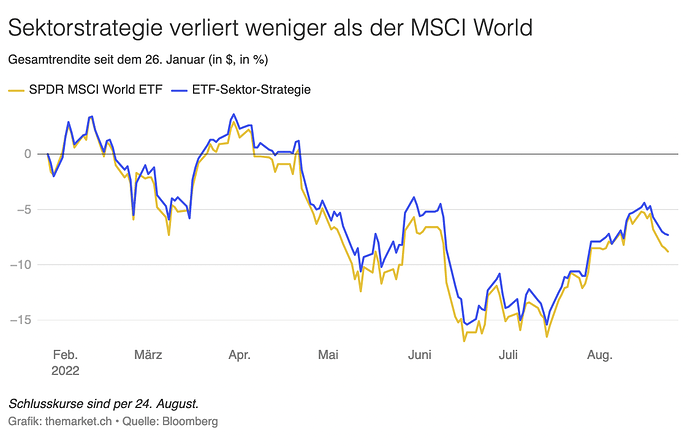 Thanks for your reply.

In my opinion totally correlated. And not sure how you mix the sectors in a rule-based way to get a slight overperformance. I mean how did they come up with overweighting energy and underweighting IT ? (and do this game consistently over a timespan of several cycles).

I am talking about funds which are designed to cut out the volatility downwards by using rule-based trend-analysis with proper risk-management. See one of the example funds the author I linked provides : 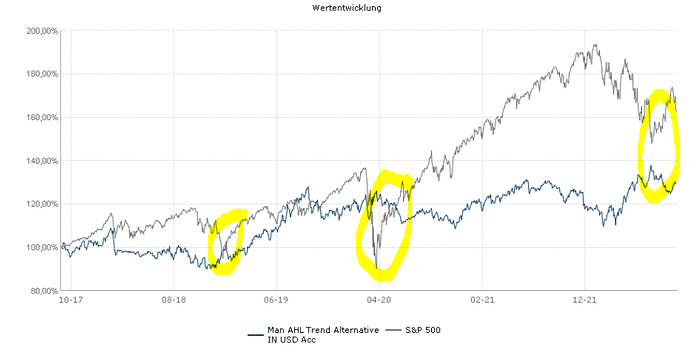 You can see that the correlation is not there. Of course the overall return is not the same than the S&P 500 (unfortunately I could not use MSCI World as a benchmark in the website I used), but you can clearly see that the fund is actually making profit during crisis time. In combination with VT/VWRL or other this would result in an overperformance of the whole portfolio over am quity cycle (upwards trend, ATH, crash, back to upwards trend). It shows that uncorrelated bets give a much better overall performance, than trying to find overperformance in certain sectors.

I am talking about funds which are designed to cut out the volatility downwards by using rule-based trend-analysis with proper risk-management.

I don’t think trend shifts can be identified purely rule based but need some deeper macro and technical analysis and understanding instead.

But isn’t what you are looking for, a low volatility strategy, similar to what Ray Dalio’s “All weather portfolio” archives? It combines and rebalances the (more or less) non-correlated assets equities, gold, commodities and bonds.

While the classic portfolio underperforms the SP500 over a longer time, a slightly modified and leveraged version seems to perform better while still being less volatile… 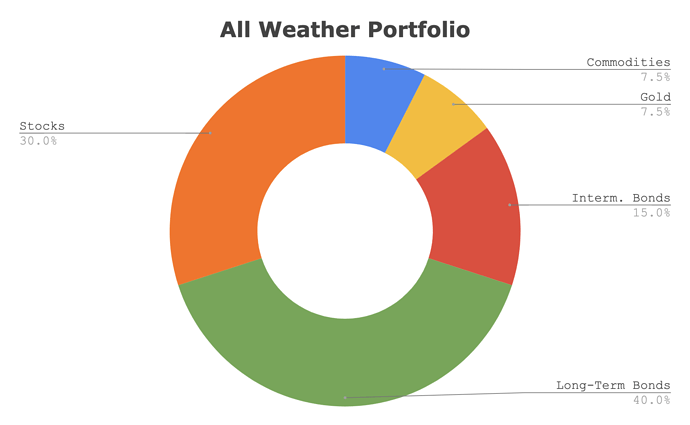 Applying leverage to the Ray Dalio All Weather Portfolio gets you enhanced exposure to what is traditionally a low-risk, low-volatility asset mix.

First of all the graph in article is kind of misleading. It starts in 2004 (just when the recovery of the dot-com bubble starts, and ends just before the Ukraine crisis. I guess it would look different if you take numbers until today. I guess the performance would be much closer now. (see the crash of 2008 where the AWP outperformed the S&P 500 for a rather long time of 6-7y).

It is exactly the same philosphy : combining asset classes which are uncorrelated, might not have the best return for itself, but combined will give a higher return by reducing the downward volatility drag, except that I am talking about a new asset class (trend follower funds) which are rather old and proven, but still difficult to invest in as a Private Investor.

Problem with bonds and gold and commodities are rather low performance over a whole cycle. Bonds are even not that uncorrelated with crisis times, the drawdown might be smaller. While the overall performance of this followers is lower than ta benchmark equity index, performance is still overall positive, and in some case it has been even better (especiall during crashes).

The idea is to find an assetclass which is
-compensating market crashes of the ETFs
-holding its value (or even gaining some) when there is no crash.

And apparently this trend-followers meet these conditions (according to the articles I linked, I am still in research mode).

My question : did someone already do that research ? Did anyone bought this kind of funds ?

PS : pls do not focus too much of the example fund I gave, there are plenty of others. and actually you would probably need a mix of several.

Problem with bonds and gold and commodities are rather low performance over a whole cycle.

That’s why they replaced gold and commodities with utilities.

The idea is to find an assetclass which is
-compensating market crashes of the ETFs
-holding its value (or even gaining some) when there is no crash.

That’s why they replaced gold and commodities with utilities.

Except that utilites are rather difficult to invest in outside of the USA (and where the liberalisation of the utility market wreaks havoc among the infrastructure - since there are regional quasi-monopolies which are barely regulated - but not the topic right now).

REITs also lost value during the latest crash… And the 2008 stock market crash was also a RE crash (less so in Europe, but worldwide it was). See the YTD performance table (until April 2022) in this article. 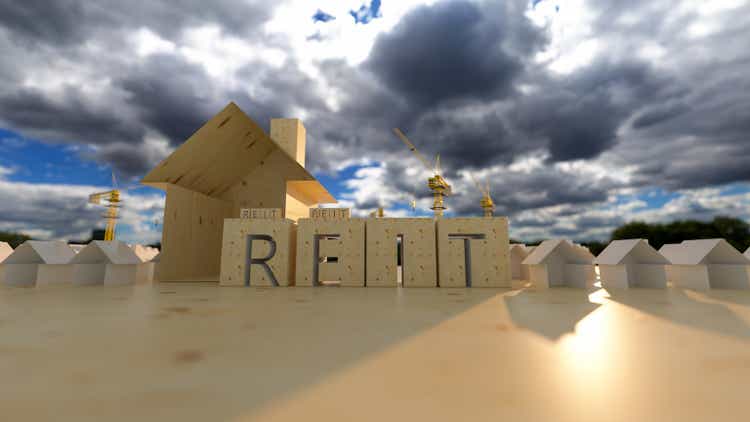 March’s REIT recovery was short-lived, as the REIT sector plunged -5.85% in April. Click here to read more about the state of REITs in May.

I would like to recenter the discussion. I am not asking for all the possible uncorrelated asset classes which might exist. I am asking if someone has experience with the particular asset class of trend followers.

with the particular asset class of trend followers.

That’s not really an asset class, more a strategy.

What I always ask myself when I encounter strategies like this, why it has not been adopted by more people, if it is so successful? Especially here they claim that it works for over 200 years, that makes me skeptical.

That’s not really an asset class, more a strategy.

I would say it is debatable. Lets say the important part is that these type of funds are uncorrelated to the passive market.

What I always ask myself when I encounter strategies like this, why it has not been adopted by more people, if it is so successful?

One answer would be the difficulty of access (for private investors).
Another answer would be also that for institutional investors, there is the fact they would lag behind for a certain number of years, and only when there is a crash they would shine. I can imagine that between 2010-2020, fund managers would have not a lot of fans when the investors are asking why they are lagging behind at every quarterly/annual meeting. I guess you have to have balls of steel saying “ya I am missing out on a few percent per year over the next 10 years or so with a high risk product*, but when there is a correction, I will be the king of the world”.
*when I say I high risk, I mean comparable to ETF

On the other hand, ETFs are also a tool which became so popular over the last 40 years or so.

Just to be clear, I am not fully convinced it is the right thing to do. I get the argumentation of having an uncorrelated fund which is at approx. the same risk/return level than an ETF (slightly lower return though), but since both are uncorrelated, you can drastically increase the return of the total portfolio.

That is why I bring it up here. I find it interesting enough, I kind of understand how it is supposed to work, but a/is the argumentation actually holding up and b/how to implement it practically without letting costs get out of control at our level of small fish.

I guess for a/ there is no other way to find out to backtest, being sure you do it over longterm. Meaning go to point b/, choose funds which would be accessible for us small time investors and meet a certain set of criteria (one article gives a set of criteria which need to be refined).

The work would be pretty considerable, the reward could be also. I am still at the point trying to estimate if the possible reward would be big enough. It is just so much easier to say I get my ETFs, I will get 5-7% p.a. on average. It is pretty easy to verify, costs are close to zero, and I am still pretty sure that I won’t die poor. The trend-following funds could reduce volatility considerably + increase return to new levels, but at the price of time, costs (not as cheap as ETFs) and introducing new risks as well (management), but from nothing comes nothing.

What would you think ?

Side joke : would be some perfect master/bachelor thesis, wouldn’t it ?

There are some US ETFs that seem to be what you are looking for:

The author of the articles you reference is German and doesn’t have access to them.

Or maybe they prefer to sell their services:

Or maybe they prefer to sell their services:

I would rather tend to say no access (he mentions to use UCITS at some point when looking for funds)
But you are right emphazising on the fact he is shareholder in a company which sells the mix ETF/trend follower. I haven’t done that, so thank you.

Will have a look on them, thanks.

I used to like Finanzwesir for his excellent passive global index investing podcasts, but he’s clearly gone rogue:
https://hartmutwalz.de/1-jahr-spaeter-finanzwesir/

As to ETFs: Have a look at KMLM and PQTIX too.

Beware of funds which promise you the holy grail of investing: more return with same or less risk. There is no such thing, imho. Protection from downturns is insurance, and insurance always costs you something.