I was wondering if mustachians/bogleheads eat less meat than the generel society? Most developed countries are around 1-2kg/week per person. 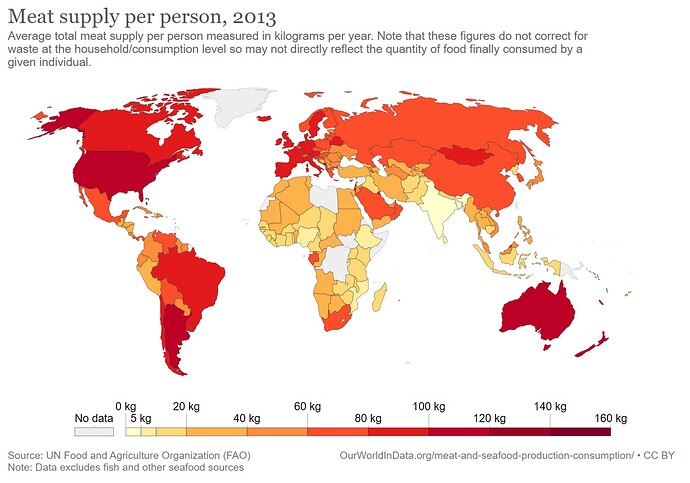 These days, I’m mostly tired of cooking and eat meat maybe twice a week, so maybe 400-500g per week. In normal times, I’d go for something like 4 times a week, so 800g - 1kg. My proteins also come from cheese, eggs and beans.

I’m a meat lover and I usually eat meat twice per day. I’ve chosen 1.5-2kg per week but I guess I also have many weeks where I eat more than 2kg, especially in summer during the barbecue season, then dinner is mostly meat and salad.

In Switzerland also for meat lovers, that becomes hard; prices are a bit… too much

We eat between 500g to 1kg of meat per day, for two people. But that includes meat with bones like chicken, so don’t know how much “meat” that’s really. But I would say that we are over 2kg of meat each.

I used to eat no meat at all for a couple of years.
Now I’m at around eating it once or twice a week. Probably somewhere around 200-300g on average. Mainly swiss beef, because it’s the only meat I find plausible that the animal might have had a net positive life. But this means it’s also not the most mustachian choice.

But this means it’s also not the most mustachian choice.

I like to think that mustachianism is about optimizing fullfillment and/or enjoyment, at the scope of a whole life. Expensive but not frequent enjoyments fit that bill perfectly (as opposed to never be able/allow oneself to spend on expensive things).

I usually have meat for lunch 7 days a week. Chose 1 - 1.5kg. Plus the occasional large Cordon Bleu once per quarter or so.

I put 1.5kg to 2kg but we are already in reducing it for a few years.
from where I come, we eat meat / fish in almost every single meal.
This include 2 breakfast (second normally a small sandwich) , lunch (meat) afternoon snack (here normally without meat as it is a fruit or so, supper (fish) so at least 400 per day

Mine is probably around 1kg or roughly every second meal, including breakfast.

OK, so after 77 answers we can see that 75% of the respondents eat less than 1 kg meat per week, which is less than 50 kg per year. I calculated the average of all responses and its only 43 kg per year! This puts the members of this forum below the Swiss average of 66 kg, and closer to Turkey/Iran. I wonder how truthful were the responses. I was hesitating between putting 1-1.5 and 1.5-2.0. Maybe we do eat more meat than we think.

Keep in mind that those global numbers include all people, so kids and older people too. Young adults will probably eat a lot more on average.

I think the result from this survey here isn’t that surprising. We are mostly frugal and our intelligence is clearly above average. Meat is expensive and morally questionable.

Meat is expensive and morally questionable.

You want to get philosophical, here’s a meme for you about morality:

and our intelligence is clearly above average

Wait, was this whole topic meant as an alternative IQ test? I’m not sure I’d correlate less meat consumption with higher intelligence. If anything, conventional wisdom links it with fish (which I would consider a kind of meat, some kinds of vegetarianisms notwithstanding).

Why? What’s the point. I don’t get your agenda here. First ask people about their meat consumption, then moralizing about how bad it is, then not letting them vote?

100 is a nice sample size, I like that number. I never said that eating meat is a bad thing. Would be weird as a meat-eater myself

Like I said, it’s not that surprising that frugal people eat less meat than the average. Some of them eat pasta everyday and live under a bridge to save more money for ETFs (not srs).

I think there are studies that showed that more intelligent people are more likely to turn vegetarian or reduce their meat consumption. (I hope that nobody interprets it as vegetariens generally being more intelligent)

I think there are studies that showed that more intelligent people are more likely to turn vegetarian or reduce their meat consumption.

They may, but a BBC investigation focused on the nutritional aspects of meat vs no meat tends toward the conclusion that a lack of some nutrients mainly/only present in meat hampers the brain abilities: How a vegan diet could affect your intelligence - BBC Future

Other studies show that eating meat has been instrumental in allowing our specie to develop its brain by allowing energy to be allocated less to the guts and more to the brain: NPR Cookie Consent and Choices (the article should be behind the consent form).

As a totally anecdotal piece of tidbit, here’s a reaction video from Pewdiepie featuring a girl with a PhD in cancer biology thinking highly of her own intelligence ranked with other people: Strangers Rank Their Intelligence Is KARMA - Jubilee React #18 - YouTube

Assessing intelligence is a very delicate topic. I would also be very wary before assuming higher average intelligence between the users of this board versus the broader society.