That seems to go against what @hedgehog was saying just above:

Unlike with IE, LU, and other european funds, where 15-30% of the original dividends are irrecoverably lost along the way.

But I hope you’re right and that there’s a way to recover at least part of any withholding on the dividends. This is the first year I’m investing in VWRL + CT, so how taxing will work is still mostly a surprise for me.

Yes, but I think the rate should be 15% for Irish funds. 30% was what I found for some GB funds: compare dividend yield of VOO and VUSD. As it’s the fund who got hit, not you, you don’t see this withholding and can’t declare it to reclaim on your tax devlaration. You can only claim back what was withheld on a distribution directly to you.

How to minimize losses? Use US domiciled funds (no withholding at fund level for US stocks) with a qualified intermediary US broker (15% withholding for CH), such as IB (lowest fees)

Would anybody be willing to summarize this topic and edit the initial post here accordingly? It thould be editable by everybody, like wiki-style.
make a small how-to or step-by-step procedure so new people can educate them efficiently.

).
As others stated, taxes are withheld before distribution -> we don’t know how much exactly.
Would be interesting a comparison with the US version but I think the composition isn’t exactly the same…

Regarding a US version, that could be interesting, and I think my initial fear with holding US ETFs has been dismissed in The $60’000 cap for US investments.

Yes, I think it would be useful to update the initial post @nugget quoted in order to reflect this “new” (for us) info (5M against 60k would probably change the approach for the most of us…

Anyhow, I’m still not able to find an example which would justify - for me - the added hassle of dealing with tax reclaiming etc if I’d choose to invest - say - in VT instead of VWRD.

I mean, a simple chart or - better - real numbers on a given period, which clearly show how much we had gained - in USD, assuming lumps sum and/or regular contributions - thank to the lower TER (VT is now 0.11%) and the “less taxed” distributions…

Yes, I think it would be useful to update the initial post @nugget quoted in order to reflect this “new” (for us) info (5M against 60k would probably change the approach for the most of us…).

plz edit the other, more general post accordingly. I dream of this to become some knowledge-base such that you don’t have to dig through many threads but only a few that sum it all up!

edit: I asked MP to turn it into a Wiki-post such that everybody can edit it

VT and VWRL don’t track the same index, small caps are missing in VWRL. You really need to compare like for like. For Vanguard it doesn’t look like they have direct US equivalent of VWRL, you’ll probably need to look at the mix of VTI and VEU to cook up the same index

I’ve found ishares’s US-based ACWI which seem to track the same thing as VWRL. Let’s compare their ttm dividend yield plus TER which is normally taken out of dividends: (2.05+0.33)-(1.98+0.25) = 0.15% difference. Dividing by yield, that’s about 7.5% extra dividend loss for VWRL. So looks like this may be primarily caused by 15% loss to US on the 53% US stocks it holds, and for the other countries either they are able to reclaim everything most of the time or IE vs US domicile makes little difference. (Edit: ACWI != VWRL too)

Best strategy I think is to hold a very low cost US-domiciled ETF for US stocks, and for ex-US you can choose low cost fund wherever, IE has the advantage of 0% withholding rate.

Yeah, world indexes seem to be really difficult to compare (VWRL has 2’990 stocks, ACWI 1’325 -> not easy to understand the performance differences…).

Easier perhaps if you stick to US and compare VOO to VUSA as you suggested some posts above; having a look at Morningstar - if I read it correctly - I see a total return % difference, on a three years period based on NAV values, of 0.4% (->0.13%/year), see chart below. 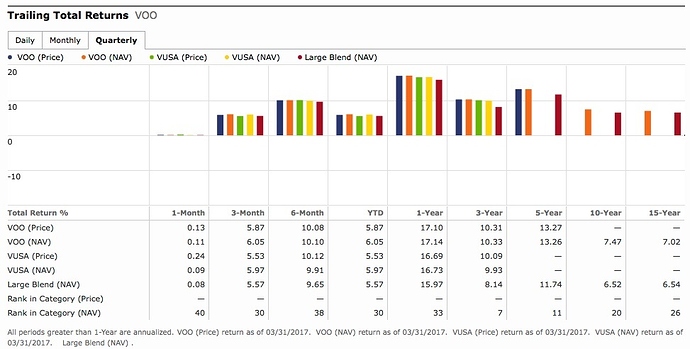 For 100k invested it’s 130 CHF/year, at the cost of filling the DA-1 to claim withholding taxes back.
Might be worth it if one sticks with USA or makes a personal mix; can’t evaluate if one prefers a single total world index (it also depends on broker costs to buy the different shares on different marketplaces etc…).

At the end of the day, the topic is really complex -> except for personal knowledge (which of course is always positive) I don’t know if it’s really worth it to “invest” too much time… ?!
To each his own…

I’ve also added a Non-recoverable dividend tax row in the ETF simulation sheet. It would be nice to have realistic numbers there to make it easier for people to select funds, and how the choice of fund domicile/broker affects their returns.

Hmm I think we are talking about different funds then. 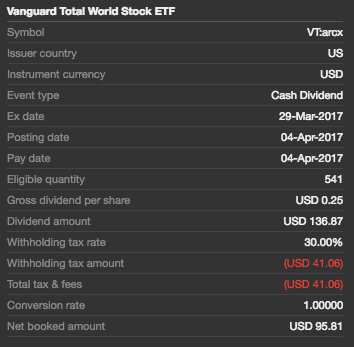 This article in the Boglehead wiki has an interesting take on ETF taxation. It boils the impact of taxes down to a single number, which they call Tax Withholding Ratio (TWR). TWR is a number you can add directly to the fund’s TER to get an estimate of the total ownership costs, including taxes. This sounds like a reasonable way to think about it.

Interesting link. But the simple model described there is truthful just for taxed-at-source-only people, for whom withholding taxes are final taxes.

If you go through ordinary taxation in Switzerland, you can usually reclaim all of L2 withholding on your tax declaration. On the downside, you have to pay then your income taxes on gross L2 dividend, possibly with some interest for late payment of taxes, reclaiming the part above 15% withholding may require more paperwork and postage, and as it can take a year or two to get withheld amounts back, there are some opportunity costs as well due to missing out on reinvestment.

At Simplewealth.ch , we made a benchmarking of different brokers, in a nutshell:

We ended up choosing Interactive Brokers because of the API option and the SIPC protection. They are not the friendliest but automation brings a huge peace of mind.

On domiciliation, we choose only Ireland or Luxembourg domiciled ETF, that simplifies tax treatment a bit.

Well I just created an actual Interactive brokers account and put in closer orders at saxo.
I know position transfer would be an option but it is way more than fees for just buy and sell and transfer (hopefully, the transfer to IB is kind of a wildcard at this point) and I am switching to VT anyway.

I hope I did not choose the worst possible time to temporarily pull out of the stock-market XD.

I’m also transferring VWRL from CT to IB (with the intent of switching later to VT). Why do you say it is way more than fees?

Depends on how much you have. A asset transfer is 50CHF if your fees of selling and buying (the fees for VT at IB ar practically nothing) it is cheaper otherwise not. I only had about 17K at saxo so it worked out cheaper.

I am really not sure about the money transfer though.

The fees for selling in my case would be more than 160 CHF, so it is worth it. It is so refreshing to pay almost nothing to buy/sell from now on! Regarding the money transfer, I paid nothing to transfer back to PostFinance, but 10 CHF to transfer later to IB.

Yea it is nice that the option exists. As far as I have read you have one free transfer from IB per month. I really hope the raiffeisen transfer is really just 3CHF (I highly doubt it because reiffeisen is so expensive in every other regard).

I also killed my Truewealth account since it is mostly just sitting there.

PostFinance also mentions 2 CHF for the transfer, but it ended up costing 10 CHF (no explanation on what happened to the other 8 CHF). Yeah, I’ve looked twice in the last 5 years at Raiffeisen, and twice I came out thinking: why would I ever want to pay those fees?