I just stumbled upon a great article at Seeking Alpha explaining why VT ETF is still a great choice and I decided to share it with you. I’m gonna copy paste the whole piece here:

VT: A Gold Standard ETF That Gives You The World

The Vanguard Total World Stock ETF (VT) is an ETF of worldwide assets offering an opportunity to avoid concentration risk while maintaining a bias towards domestic large cap equities.

Exchange traded funds have rapidly gained popularity since their creation and for good reason. ETFs offer a transparent, tax-efficient, and inexpensive option for accessing broad swaths of securities. ETFs are generally categorized as either passively or actively managed. VT is a passively managed fund anchored to the FTSE Global All Cap Index, an index of all global equities in both developed and emerging markets. Changing valuations have presented a compelling case for investors to broaden their focus from exclusively domestic equities.

VT is simple, straight forward, and effective with its broad exposure and low fees. We believe the fund presents a compelling opportunity for investors who are hungry for broad exposure while maintaining an American bias.

Let’s look under the hood of VT and see what makes this ETF one of the most popular on the planet with over $32 billion in assets under management.

As mentioned above, VT is a passively managed ETF linked to the FTSE Global All Cap index. In summary, the index includes nearly the entirety of the global stock market providing exposure to equities across the planet. This includes 9105 holdings as of July 2021 offering the highest level of diversification available in global equities. Domestic equities continue to become more concentrated as the largest capitalization firms continue to outperform. Should this outperformance cease, the impact could be significant due to the concentration risks. Meanwhile, international markets have not seen this same concentration risk, providing a superior opportunity to spread risk.

In terms of geography, the fund is diversified across the globe with a majority concentration in North America. According to Vanguard, North America represents slightly over 61% of the total fund with the remainder focused on Europe and the Pacific. 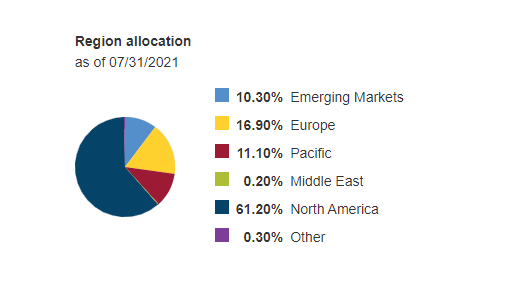 It takes a quick look at the portfolio’s holdings to realize the portfolio is largely reminiscent of the S&P 500. Currently, familiar faces such as Apple (AAPL), Microsoft (MSFT), and Alphabet (GOOG) occupy the three largest allocations of the portfolio. In fact, the top ten holdings share nine of ten similarities with the S&P 500, with the exception being Taiwan Semiconductor Manufacturing Co. Ltd. (TSM). However, VT’s allocation to these firms is substantially lower than the SPDR S&P 500 ETF (SPY). For example, AAPL represents 3.02% of VT’s total portfolio compared to 6.19% of SPY’s portfolio. The fund is not top heavy with the top ten holdings constituting nearly 14% of the entire portfolio. Additionally, portfolio turnover is light at 6.00% per year.

The fund has performed in line with the global equities market, outperforming category averages across one-, three-, five-, and ten-year time frames. Following a sharp decline at the beginning of 2020 due to the COVID-19 pandemic, VT performed well, gaining 16.61% in total for the year, beating the category average by nearly 4.00%. Over a ten-year time frame, the fund has offered an impressive 149.2% price return, not including dividend distributions enjoyed by the shareholder. Inclusive of dividends, the ETF has returned 8.22% annually since its inception in 2008, shortly before the Great Financial Crisis. 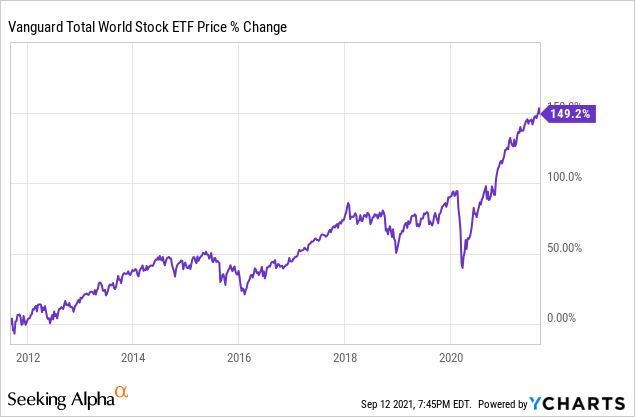 Performance has largely been driven by domestic equities including large cap growth stocks which occupy the largest allocation of the portfolio. AAPL, MSFT, and GOOG/GOOGL account for nearly 8.00% of the portfolio and carry one-year returns of 32%, 45%, and 81%, respectively. VT has allowed shareholders to take part in the outsized returns produced by large capitalization tech, while protecting downside through its extremely diversified portfolio.

We would be remiss without addressing VT’s potential as an income producing asset in your portfolio. As we often discuss, yield compression combined with an inflationary environment has created a strong necessity for income and growth. Investors are looking for growing cash flows to support living expenses as we see the short-term inflation rate rise above 5.00%. While we do not consider VT’s current dividend yield of 1.61% to be particularly strong, the fund’s dividend has grown substantially over long periods of time. Over a ten-year period, the fund has grown its distribution at a 4.67% compound annual growth rate.

Additionally, the dividend yield does offer a small, but meaningful spread over current ten year treasury rates, which remain around 1.25% (well below the short-term rate of inflation). Combined with VT’s ability to grow its distribution by passing through increasing dividends, we still see meaningful opportunity in VT as an income producing investment. An investment in VT at the market close on January 3rd, 2011 would have costed $48.23 per share. Combined with the current trailing 12-month dividend of $1.71 per share, your yield on cost currently sits around 3.55%. Not bad having also more than doubled your initial investment based on current share prices. 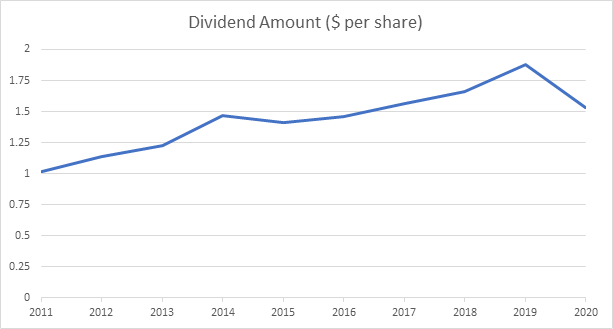 VT’s ability to diversify portfolios away from exclusively domestic equities is becoming increasingly relevant as global valuations begin to take shape in the COVID-19 era. As we have highlighted, the S&P 500 is trading at historically high valuations as the equity market has rallied emerging from the heights of the pandemic. Currently, the index is priced at nearly 35 times earnings, substantially higher than pre-COVID. JPMorgan recently addressed this concern, indicating they expect a decline in valuations to offset anticipated earnings growth over the next five years. For reference, this multiple is 83% higher than the price earnings of the S&P 500 in January 2019.

Domestic sectors such as reopening and stay at home stocks have performed well through COVID-19 for obvious reasons. At this point, their valuations have been driven to extreme levels, particularly in the software and media categories. While investors have shown their appetite for risk, we do not believe valuations have much room to grow further.

Consistent with the domestic markets, global equities have seen a similar rise in valuation. However, global equities have retained a more reasonable multiple. According to Siblis Research, global equity markets currently trade at a trailing twelve-month (TTM) price earnings ratio of 25.15 as of 2Q 2021. This multiple is roughly 46% higher than the global multiple from the same period in 2019, just two years ago.

As illustrated, global equities offer investors an opportunity to invest at more reasonable valuations. Given the aggressive expansion of domestic equity multiples, it is difficult to build a compelling case the expansion will maintain, let alone expand further. We believe VT is an opportunity to maintain equity exposure, while hedging a possible normalization in domestic valuations.

Vanguard boasts some of the lowest expense ratios in the world. VT specifically has one of the lowest fees of any ETF available at 0.08%. Vanguard estimates that over the course of ten years, a $10,000 investment will cost approximately $189. A decade of management from one of the world’s most trusted asset managers for less than the price of a fancy bottle of wine seems like a good deal to us. According to Vanguard, the firm’s fees are 75% lower than the industry average.

Although we know past performance is not indicative of future returns, VT has a glaring issue that we need to address. The fund has underperformed the S&P 500 over nearly all time frames. 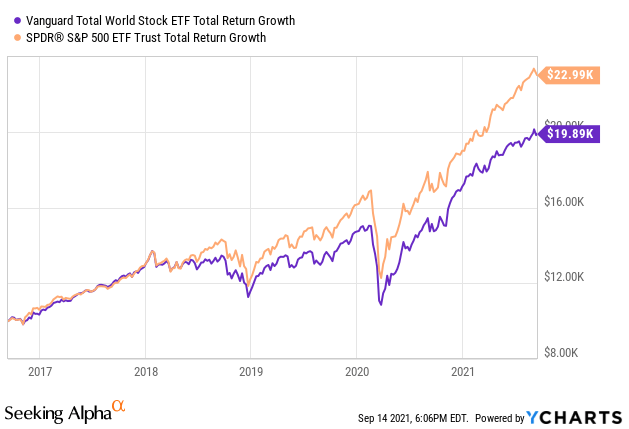 While we reiterate that overall performance is strong, the powerhouse S&P 500 has grown tremendously, as illustrated in the chart above. The S&P 500’s concentration in domestic technology firms (technology and communication services account for over 36% of the index) has accounted for a large portion of index’s performance. Information technology and technology as sectors in the S&P 500 have had five negative years combined since 2007. 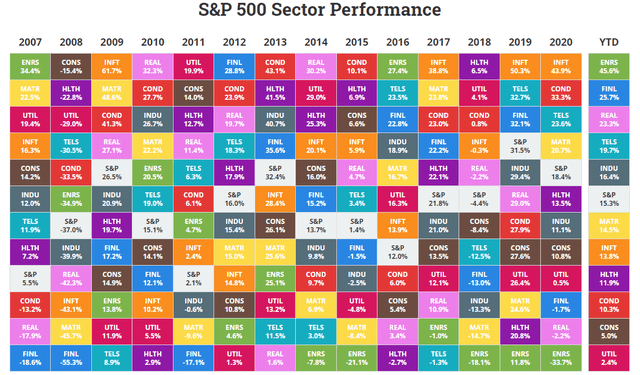 International equities have been unable to keep pace with the United States for a variety of reasons. Europe has been deeply impacted by its ongoing sovereign debt crisis. While it’s clear the issue will not be resolved in the immediate term, we believe substantial strides are being made. For example, the European Union recently raised five billion euros in debt, indicating momentum towards a unified economy remains steady. Although we don’t expect any near-term changes in the situation, a long-term solution could increase economic outcomes and investors’ appetite for risk.

China has deeply impacted performance of Asian equities as their crackdown on tech and financials continues. While the reach of these changes is limited, China’s economic size impacts Asia as a whole. For reference, iShares MSCI China ETF (MCHI) is representative of Chinese equities available to international investors. The ETF is down nearly 30% since its high in February. It appears turmoil is likely to continue in China as political powers now set their sights on the Online Gaming and Casino industries.

Time will tell if the S&P 500’s outperformance will continue. The past decade has reinforced Warren Buffett’s lesson of “never bet against America”, but we still believe the merits of diversification remain. This belief is reinforced as issues which have impacted international stocks in recent years begin to subside. As the global economy changes, exposure to other economies is increasingly important for investor portfolios.

Many investors seek wide diversification as the bedrock of their equity portfolio. The global markets have rewarded investors with strong returns over wide time frames, consistently increasing dividends along the way. VT offers investors a scalable option for accessing the global markets, with a concerted focus on the largest companies on the globe. If you believe the global economy is poised to continue growing into the future, VT offers a strong opportunity to act. Combined with a powerful and reliable asset manager, VT is an ETF with an excellent risk profile and the potential for continued performance. If you are looking for an ETF to buy and never look at until you retire, VT may just be your best bet.

We don’t have a policy wrt pasting entire articles?

No idea, but if I violated one, please remove the thread or just leave the link - I think the article is worth reading.