SRI boglehead portfolio - is it good or are there better options?

Making capital more expensive for LafargeHolcim will mainly impact their ability to finance that research. Is this a good idea?

Yes, I think they have a much higher measurable impact than equities and can be far more targeted.

You pay with it with lower return, maybe even negative return.

Maybe I’m a bit hung up on the feel good versus doing good issue. For me, feeling good at the expense of doing good just won’t make me feel good.

I just don’t see the evidence that these SRI funds will do anything to improve the world, even if you accept the theory that you lower the cost of capital at the expense of your expected return for the companies in the fund.

Just that Lonza and a company that uses palm oil to produce fuel are included, puts major question marks on the fund.

You also end up investing in firms that just happen to be in industries, that are not carbon intensive. But that also means that these firms often don’t do much to reduce emissions.

Just for the record: there are also MSCI ACWI Socially Responsible ETFs with TER 0.28%. That means both developed and emerging markets included: 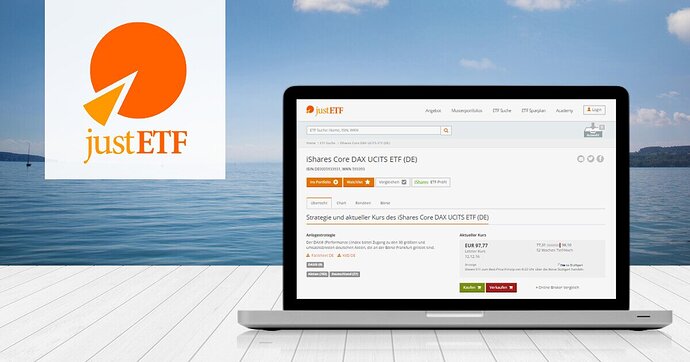 Although more I look at ESG/SRI, less meaningful it seems to me.

My opinion on all these “sustainable” ETFs is that is just another move from the marketing department to attract new investors that want to invest their savings among a “friendly care about the future” financial product despite the fact that investing will not really decrease the climate change but probably increase it.

If you really want to invest in sustainable company, the right way will be to trade shares of these companies by yourself or using YOVA and accept their fees.

ESG, ESG Screened, SRI are just others financials products to give people some good principle by saying that they avoid investing in oil producer like TOTAL, BP or Shell. But in the near future, these companies will probably become “greener” as they will changes their business model to provide more “clean energy” such electricity to charge our future EV.

This is my own opinion, but I do consider that during 2020, these ETFs performed really well.

Thank you. The accumulating one looks good, the other one is too small for me. The advantage of the ACWI ETF is that it’s simpler. Just one ETF instead of two.

Disadvantages are higher TER of 0.28% instead of close to 0.2% (for the other two combined). It’s smaller in volume, 219 mio against 636 mio and 1’800 mio respectively. Diversification should be similar, with the ACWI including 502 stocks, and the other two 365 and 182. I guess you could argue that the iShares emerging market poses a higher risk with just 182 stocks. As it would make up for 12% of my ETF portfolio, I think that is acceptable.

Overall, I think I prefer the lower TER and higher volume over the simplicity of just buying one ETF instead of two.

@Yanikuza it might be true that investing per se is not climate friendly. It is something I am thinking about. The logical conclusion would be to either not invest at all, or pick a solution like YOVA. YOVA I have ruled out. I think it diversification might be an issue with it, as it focuses on a few segments only, and then picks single stock from these segments. Combined with the high cost, I’d prefer not investing at all.

As to the efficiency of the SRI label, surely it is preferable over just not caring at all? Ruling out the worst offenders in each segment, might not be the perfect solution. It’s a start. And if everybody did that - instead of saying what the heck, SRI is not perfect so lets just ignore it - the allocation of money to the less polluting companies certainly would have a large effect. I hope that with SRI, I am allocating my money to the least polluting companies in each sector. If a lot of people do this, it could be an incentive for all companies to reduce their footprint.

Also, the argument that choosing SRI funds makes the normal funds more profitable for other people doesn’t convince me. It is like saying if I hadn’t robbed this bank somebody else would have. That other people are fine with investing in Exxon and Shell doesn’t mean I have to be fine with it too. I will happily invest in them when they actually have become greener and provide clean energy. 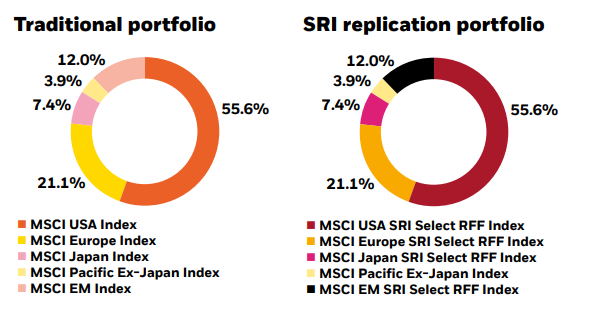 Thanks a lot, this is very very useful. I have created a test account with TrueWealth, and it allocates in a similar fashion: 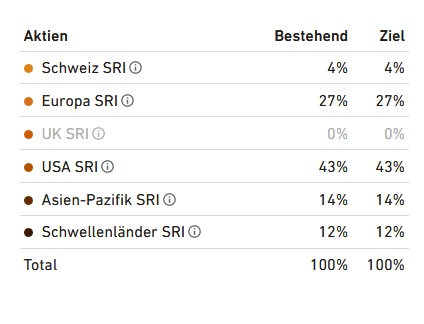 I am currently trying to decide if I should go with TrueWealth despite the additional 0.5% fee, or if I should just buy the two iShares ETFs you listed and call it a day.

Available as accumulating shares as well.

Perhaps (probably!) this will show my ignorance, but just a thought: if the OP would like to avoid contributing his money to certain industries or companies, but would still like to benefit from the returns of a non-SRI ETF, would a swap-based, synthetic ETF not achieve that? From what I’ve read, these synthetic ETFs replicate the performance of a certain index, without actually owning any of the securities of the companies in that index?

You would get “engineered” performance of the index without your money being involved in owning the securities of companies you don’t approve of?

No idea if that’s a valid supposition or not, so am happy to be corrected!

Synthetic ones probably would just shift the ownership/impact to the counterparty of the ETF provider.

Allright, I am ready to take the exciting plunge. Open an account with Interactive Brokers, transfer money and buy my very first ETFs. I have decided to buy

I researched a lot of SRI ETFs, and in the end these two looks best to me. This resource was very helpful:

Now, one last question. Is there a diversification problem with Small Caps not being present at all in my portfolio?

Now, one last question. Is there a diversification problem with Small Caps not being present at all in my portfolio?

This is the difference of a global index fund with small caps and without: Vergleichen - fondsweb

The sum of all small caps is still pretty small.
It doesn’t make much of a difference.

Having 90% in a broad market-cap based ETF (such as on tracking MSCI World), your entire portfoio is basically going to get market returns. Especially if the other 10% is invested in stocks among a range of countries as well. It’s hardly to going make a discernible difference to your overall portfolio.

Thank you, good advise. I have started investing with Interactive Brokers. First lump sum divided in

I don’t know if you already invest something, but Vanguard release in march an accumulative and a distributive ETF based on ESG criteria

You can find them here:

There is also US domiciled ETF for US and World ex US.

Thank you Yanikuza. Yes I have seen the new Vanguard ETFs. I have decided to go with the iShares MSCI World SRI. It’s established for longer. With the Vanguard being so new, the iShares has a much higher volume (2643 Mio vs 23 Mio). The MSCI SRI aligns better with my selection of companies that I do and don’t want to invest in. SRI being much stricter than ESG. Also, the iShares fund has a slightly lower TER with 0.2% p. a. vs 0.24%. So for now, for me the iShares MSCI World SRI is the better choice.

That is a great news! I was wondering where ESG ETF from Vanguard are.

I forgot to said that the Vanguard one is an « all-in one » ETF which include developed AND emerging market, so with one ETF you will cover the entire world and also it covers large, mid ans small capitalisation

It seems also that their ESG criteria follow the SRI one or at least that they are quite the same.

I forgot to said that the Vanguard one is an « all-in one » ETF which include developed AND emerging market, so with one ETF you will cover the entire world and also it covers large, mid ans small capitalisation

Yes, that is indeed quite cool. My current solution are the iShares MSCI World SRI, and iShares MSCI EM IMI ESG Screened. That way I have small caps only for the emerging markets. But I’m not too worried about that.

It seems also that their ESG criteria follow the SRI one or at least that they are quite the same.

After some quick research it doesn’t look like that to me. The iShares SRI is quite selective, containing only 20% of the parent index. Four out of five companies are excluded. The Vanguard ESG is much, much looser. The parent index consists of 6,907 stocks, the ESG variant of 4,118. So roughly 60% of the parent index are included. Not even one out of two companies are excluded due to ESG factors. So no, I wouldn’t say that the Vanguard ESG standard is comparable to SRI.

To me it looks like the Vanguard ETF has two advantages: it’s developed and emerging markets, including all caps. And it is issued by Vanguard.

The disadvantages are heavy: brand new. Too small capitalisation at the moment (way below 100 millions). It seems to have relatively loose ESG criteria, thus not aligning with my preferences very well. Higher TER compared to the iShares.

I know that Vanguard is a bit of a champion for boglehead investors. Yet for now, to me it seems that according to boglehead criteria (provided that the choice is between the ESG and the SRI variant), one would choose the iShares variant over the Vanguard. Or am I missing something?