If you stumble upon a better one, please share.

Yeah somehow if you answer trying to match the current state of things in Switzerland you end up borderline communist. 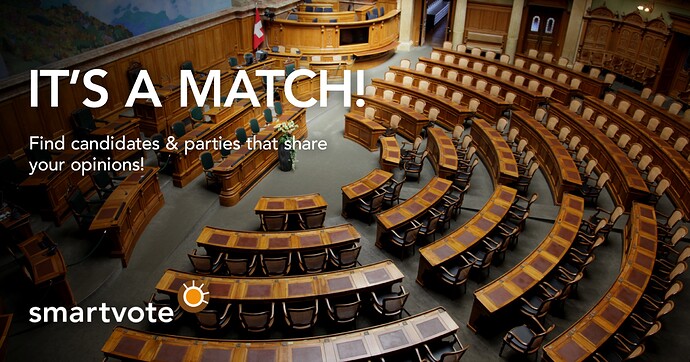 This one is for Switzerland and also much better.

The smartspider is also better able to represent multiple different topics.
Here is mine: 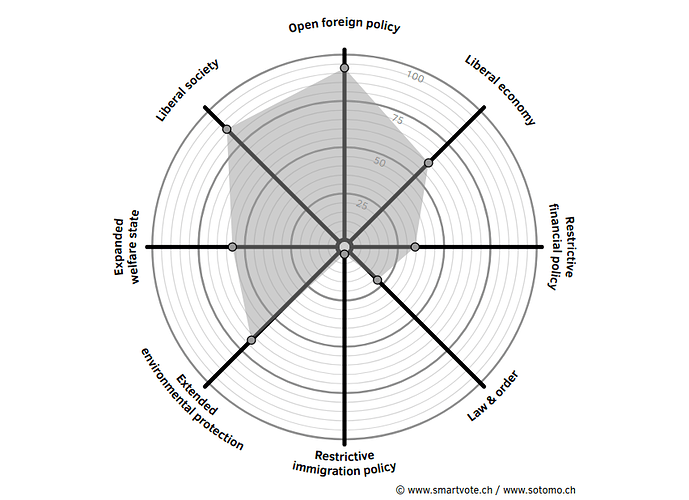 Dwayne Johnson for president (in 2024) 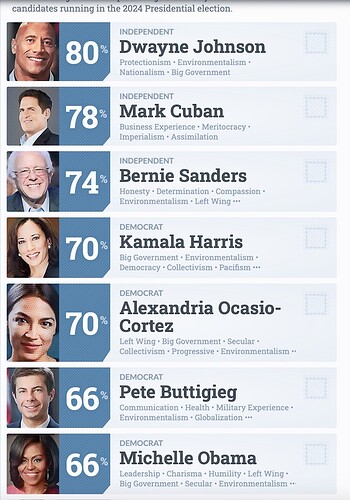 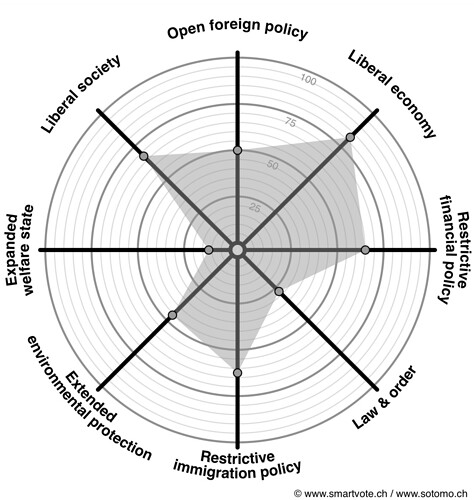 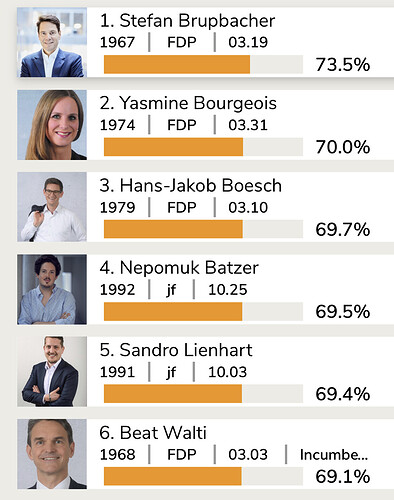 Mind you, I don’t know any of these people and I don’t know almost anything about Swiss politics. So it’s a funny experiment to do the test without having any exposure to the local media.

FDP is probably the best party for FIRE people.

If you want to retire in a tropical climate in Switzerland 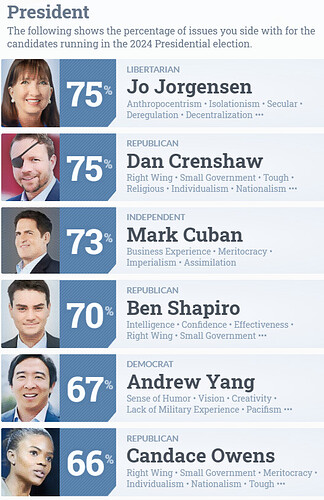 I’m usually not very good at such tests, everyone gets over 50%…

Yeah, I saw already that FDP has quite the same views as me, except environment. They would do nothing. But this guy that I matched with the most is personally more focused on the environment than the FDP as a whole.

I like these results, makes me feel less of a minority

Interesting quiz, thanks for sharing. 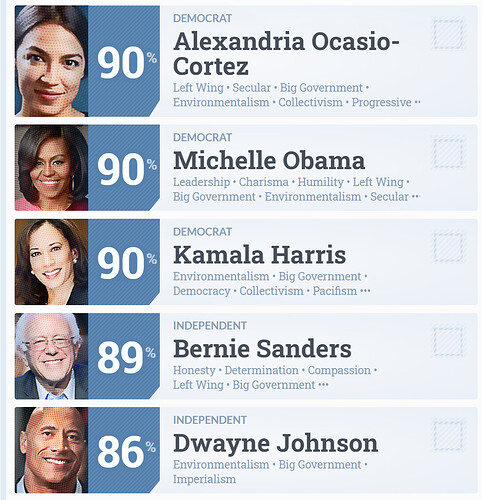 Before last is Donald with 10%, last but not least Candace Owens (never heard of her) at 7%

The result is not a surprise 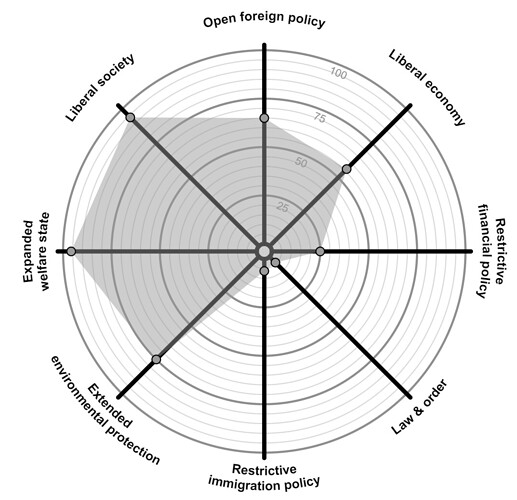 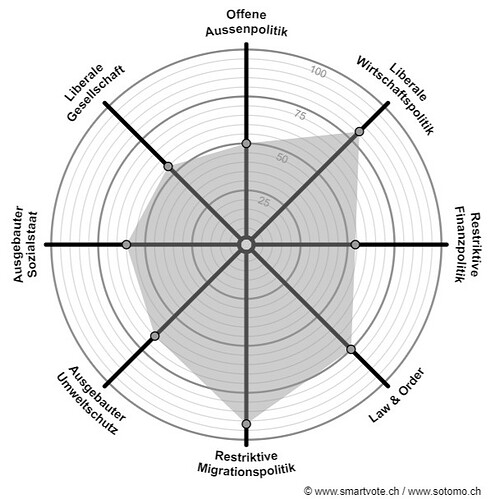 What the hell? Haha.

I see you, afaik from an “immigrant family”, have your strongest focus on a restrictive migration policy.
Please don’t misunderstand, I’m not judging, just confused. I’ve heard/seen such statistics before, but never had the opportunity to ask someone who feels that way - so here goes - Where does that come from?
Is it that you/your family had it hard to migrate/integrate and it shouldn’t be made too easy.
Is it that your family had very good reason to migrate (war) and migration shouldn’t be “just for” economic etc / weaker reasons?

I feel like we’re steering (again) into a minefield

From my side, I can say, my answers in the test would not prohibit me from coming into Switzerland (I was for keeping Schengen, bilaterals, Swiss Pass after 10 years). So at least I’m not a hypocrite in that regard

. I still got over 50% on the restrictive immigration scale. The reason is, even as a foreigner, I don’t want just anybody to be able to come. But yeah, Cortana’s result looks pretty radical. 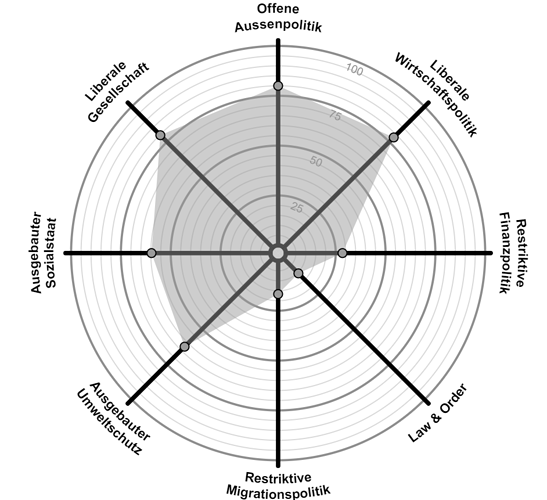 I don’t remember answering many Law & Order questions and don’t think the spider accurately reflects my beliefs there.

My top picks are all from youth parties of the GLP and FDP.
Interestingly, the “old” FDP seems pretty far away from the young ones, which could imply that the party will experience some kind of shift in the coming years.

What I witnessed in my almost 30 years in Switzerland is the loss of culture and morality. Ever been on the streets after midnight in Basel, Zurich or Geneva? Doesn’t feel like the safe country it used to be. I welcome everyone that is a decent human being. But it’s really hard to select. If I were to decide I would give everyone a chance, but at the 1st occasion of violence, hate crime or no effort to improve language/skills immediately kick them out. I sounds hard, but living in Switzerland should be a privilege! At least I’m extremely grateful having the chance of living here.

I sometimes get the compliment “I’m not used to someone with your origin being so well integrated and successful, I could swear that you are 100% Swiss”. This tells just a lot about my people.

but at the 1st occasion of violence, hate crime or no effort to improve language/skills immediately kick them out.

That was voted a while ago. Unsurprisingly it didn’t pass since it was too generic. “Switzerland” want ot help people that misbehave, even if they keep at it (remember the case Carlos? I would have put in jail the lawyers,the psycologue and all others…f…ing 40chf per day for transportation…w.t.f.)

Anyway the loss of the swiss morality and culture is unfortunately not linked to strict illegality. You won’t see anymore old women scolding people for parking in the wrong place etc etc. This is the way the world is generally heading, you can’t solve that if you don’t put up big walls. Like the ideals of UBI, there is no solution for that. In a bad future, we will have gated zones where you can enter only with a permit (see similar examples popping up everywhere in the world). Money buys tranquillity apparently.

On a funny note: it seems that “secondo” are more restrictive than n-generation swiss because they saw how it is abroad and they are scared that the toy get broken. Theoretically we should listen more to them for that very reason.

This is actually a pretty good argument. I’m a secondo myself, I know how “shitty” a country can be for living. I don’t want to lose that, ever.

Ever been on the streets after midnight in Basel, Zurich or Geneva?

I’ve been to the Langstrasse in Zurich. And I’ve been told it used to be much worse, the whole area is “gentrifying”. Also the Platzspitz, a.k.a. needle park, used to be an awful place in the 90s, now it’s just a park. It’s hasn’t all got bad, I guess?

That’s a shame. Before coming here, I’ve been told that Switzerland is this uptight place, where you will get reported to the police for listening to loud music after 22 or generally doing something wrong. Like the citizens themselves took care that everybody respects the rules. And I thought: damn, that’s my kind of place. Sadly, multiple times I’ve been bugged by loud noises at night and nobody does anything.

Btw I went to Amsterdam last year and after just 200 m of riding a bike on the pavement, some random woman showed me with the finger that I should go to the street. It feels shitty when it happens to you, but it also means people feel the social pressure to behave appropriately.

Oh yes, that is so true. That’s why I am always against any kind social programs, raising taxes, etc etc. Feels like the Swiss, especially in the big cities and in the West, want to implement social welfare straight from France, Sweden, Denmark etc. I think this won’t end well.