There were several discussions on whether Swiss investors should buy “the World” through VT (US domiciled) or VWRL (Ireland domiciled). Consensus opinion was that VT was more tax-efficient and hence the better Investment. No matter what tax treatments the ETFs have, what matters to us as investors is total return. And there, VWRL was (at least) on-par with VT.

Whether you think that the US were a better (Tax) domicile than Ireland is definitely an opinion worth having. We may as well believe in US based ETFs if we choose so. From a return point of view, it however simply doesn’t matter. Given complexity of DA-1 and additional risks involved of having all assets in one basked (US jurisdiction), I strongly urge to stop advising and channeling new funds towards VT.

Similar observations if we only take a 5 years view:

=> You will notice swings left and right that result given both i) different Year End closing times in the US and Switzerland and ii) the agio/disagio at which the ETF closes the year (last traded price vs. NAV). The swings may particularly be observed if we have a look at individual years. Their effect is transitory only gets offset with longer comparison timeframes (7 years / 5 years) and multiple vintage/evaluation years.

This comparison is done at 30% Swiss Dividend tax. Meaning that we were in a 30% Marginal Income Tax Braket and we got a full D-A1 Credit back. If there were challenges in getting D-A1 credited, this would count against the VT Peformance Figures.

As VT has a larger distribution percentage than VWRL (probably given its lower TER), VT has a slight edge over VWRL if you were a Zero Dividend Tax individual - which is certainly not the case for myself. If you exceed 30% marginal income tax, VWRL relatively soon starts to look better than VT.

Wonder where this data comes from? These are essentially ICTAX figures used aka the Swiss Tax Authorities official distributions and year end asset values.

Want to see, touch, live and breathe the data? Unfortunately, I fail to upload Excels here but if anyone wanted to upload, happy to share the Excel… thank you

Want to see, touch, live and breathe the data? Unfortunately, I fail to upload Excels but would appreciate any help/support to show me how to best do this. The Excel is available and ready for disclosure…

You can upload it to the Google Drive and share the link.

This comparison is done at 30% Swiss Dividend tax. As VT has a larger distribution percentage than VWRL (probably given its lower TER), VT has a slight edge over VWRL if you were a Zero Dividend Tax individual - which is certainly not the case for myself.

What’s not included in the calculation are the costs for buying VT vs. buying VWRL. Yes, it’s not huge amounts, but I think buying VT on NYSE is cheaper using IBKR than buying VWRL on SIX/FRA using IBKR (Swiss or EU providers are more expensive anyway, if I remember correctly).

Regarding the 30% WHT: I think there’s another thread from @nugget where he compared WHT for the different alternatives. Without having done any further research, I would assume that paying 15% US WHT for VT and being able to claim back those 15% with DA-1 is better then loosing 15% US WHT right away using VWRL.

Regarding the numbers you shared: maybe we can double-check those on Vanguard website on not only rely on ICTax.

Thanks for bringing up this topic and challenging some of our core beliefs (VT is superior to VWRL). I like it!

@dbu afraid but I don’t want to disclose my Google User. Would you mind if I forward you / just any reader here the Excel and you hosted it? If anyone could please PM me accordingly?

Meaning that this calculation is a genuine apples to apples comparison. From a return point of view, please rest assured that the figures were as well cross-checked against Vanguard. Once the Excel is listed, I appreciate if we can re-confirm and cross check all data points until we are fully sure

Buying cost may be marginally different. At the same time, I as well get the feel that the ebbs and flows may to a tiny fraction be in favor of VT. At the Moment, we simply don’t have enough years to tell for sure. Potentially, VT is something like 0.05% to 0.1% ahead p.a. The question is truly if such difference was material enough to justify a clear bias towards one - or if we shouldn’t see things more balanced (VT was bigger had bigger market penetration, maybe negligible better performance but as well material downsizes particularly from a jurisdictional risk point of view and VWRL may be an absolutely equal selection).

afraid but I don’t want to disclose my Google User.

Just create a 2nd google account for TeaCup and upload it there.

At the Moment, we simply don’t have enough years to tell for sure. Potentially, VT is something like 0.05% to 0.1% ahead p.a.

I’m pretty sure if we compare the two funds in Portfolio Visualizer (afaik not possible for VWRL), the difference is almost not visible. Just to be sure: the numbers from above are after TER, right? TER is also not giving the whole picture, because it doesn’t include TD (tracking difference). But I’m pretty sure you know that already.

or if we shouldn’t see things more balanced (VT was bigger had bigger market penetration, maybe negligible better performance but as well material downsizes particularly from a jurisdictional risk point of view and VWRL may be an absolutely equal selection)

I agree. I guess in general it’s a good approach to see things in a balanced way. VT has more small-caps than VWRL, but the percentage is really tiny. The major drivers for performance are the same for both funds.

Confirmed, the above is a total return view. Meaning that we no longer have a look at TER (which by the way I was not even sure it was exactly the same among US and IE), trading cost, securities lending returns, replication loss/gains, L1 withholding tax for Non-US equities… you name it. It simply covers what we get as an investor. And there, the situation is that there was Zero difference among them. 7 years period from 2014 to 2020, IE was ahead by 0.18% p.a.; 2015 to 2021 US was ahead by 0.22%; the Delta is random and swings back and forth (given different YE closure timings and swings from trading price to NAV).

I’m pretty sure if we compare the two funds in Portfolio Visualizer (afaik not possible for VWRL), the difference is almost not visible. 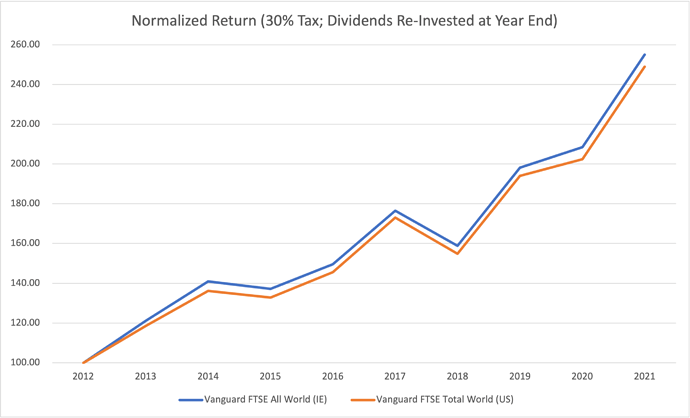 It would be wrong to take this as a basis to conclude VWRL was better - no matter what happened in 2013 and 2014; this edge over VT is gone. Given and take some arbitrary, transitory swings - both give us exatly the same total return.

As far as I can tell, the difference might be dominated by Small Caps. The FTSE All-World Index (as used by VWRL) currently has ‘only’ about 90% of the total market capitalization of the FTSE Global All Cap Index (VT).

The FTSE Global All Cap Index factsheets have a nice comparison. The one below is from end of 2021 (USD). As this is index performance, it’s before fees and presumably also before dividend taxes. 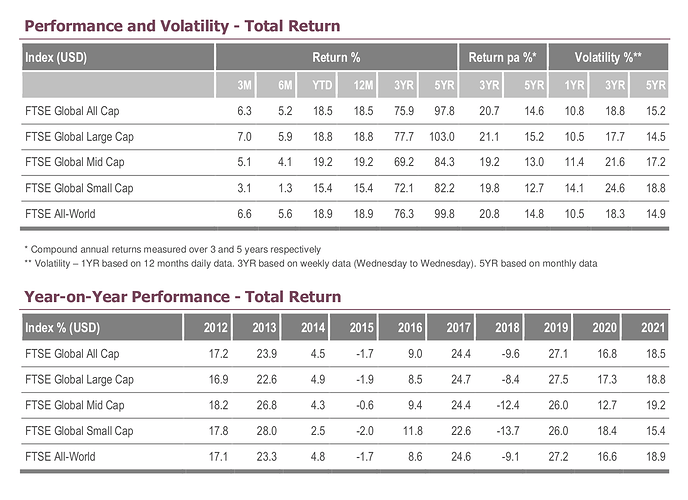 It just doesn’t make sense to me. The biggest portion of the fund are US-holdings of which you lose 15% of the Dividend with VWRL… Now even if they contribute for less than half of the total dividend payments: The Irish fund isn’t going to have a substantial advantage neither since it will also lose a lot of L1 WHT.

The main difference seems to come from the fact that VWRL has less small caps and therefore more money in bigger companies which outperformed in the last decade… VT is cheaper, has tax advantages, has smaller spreads and is more liquid… Given that they hold don’t hold exactly the same portfolio, I would search for differences there and not deny the benefits of reclaimable taxes which are irrecoverably lost on the other side.
Plus it is cheaper to buy and you can buy fractional shares (more money at a time which works for you), if you use IBKR which is not insignificant over long periods of time

I would say the reclaiming of the WHT would be done on the fund level, not on your personal level. So in the end it comes to the same.

Can’t prove it, but that would be an explication.

A non pension fund can not claim any WHT in most cases. US WHT for publicly available IE ETFs is inevitably lost and non reclaimable.

Plus it is cheaper to buy and you can buy fractional shares (more money at a time which works for you), if you use IBKR which is not insignificant over long periods of time

Even if you invest a CHF 10’000, commissions and fees should be less than 10 CHF/EUR, if I’m not mistaken. One-time, mind you. Also, don’t forget the costs of currency exchange, since most of us are earning in CHF (though arguably bid-ask spreads may be higher on European ETFs or on the Swiss Exchange).

We’re all making bigger financial mistakes in life each week or month.

also from my side, thanks to @TeaCup for challanging potentially outdated considerations

Since my name was dropped and some of my early work was referenced, for the sake of completeness here is the link to my back-then-contribution to this topic:

This is a collection of information on taxation of dividends for swiss investors. It’s purpose is to compare different options (for example VT vs. VWRD) on the ETF market from the Witholding Taxation point of view. [writing in progress] Content: Dividend/ Witholding Tax Accumulating vs. Distributing Funds 1. Dividend Tax, a.k.a. Withholding Tax A general nuisance to investors is withholding taxes. When dividends are distributed at some stock exchange, governments tend to keep a fraction of …

the takeaway was that it depends, and the overall difference is very minute. I do remember being part of creating that narrative of “US-domiciled vanguard funds are 1st choice”.

For international Stocks this can be quite different and needs to be assessed on an individual ETF’s level. Mostly due to the state of Ireland allegedly having more attractive tax-treaties on average compared to the US (<= I have never seen any proof that this is actually the case).

Thanks for the insights so far.
I have investments in both VT and VWRL and so far I can confirm that they roughly perform the same wrt price and paid dividends combined. The difference is the 15% withholding tax which can be reclaimed for VT. Although as already mentioned not all of it can be reclaimed in some cases due to an upper limit based on income and wealth management costs. Might be Canton Zurich specific.

Although as already mentioned not all of it can be reclaimed in some cases due to an upper limit based on income and wealth management costs. Might be Canton Zurich specific.

Because the gain or loss of american stocks between 17h30 and 21h (most of the year : 22h) was recorded in VT yesterday and in VWRL only today at the opening because VT is traded in the US

That’s why you can’t compare figures between the two.