I currently have a Protekta personal legal insurance (Rechtsschutzversicherung) for CHF 230/year which covers up to 1 million (for Switzerland). Now I was wondering what do you Mustachians recommend as legal insurance?

Or do you not even bother having such an insurance? I must say it might be a big of a luxury but I made use of it once and it was indeed useful.

Insurances basically work like a casino. Sometimes, you are lucky and you win (i.e. the insurance has to pay for something). Usually, as it is the case on the casino, the house wins (i.e. you pay more premiums than what the insurance pays for you).
With insurances, I try to cover only the things that are too big for me to financially handle, for the rest, I trust that I will on average win out by not taking insurance and pay up when I have to.
What kind of insurance you should or shouldn’t get, I cannot answer for you (personally, I have health insurance and houshold/liability insurance). But this way of thinking might help to answer it to yourself.

I have the combined protection (incl. traffic protection) named “TOP for family” by Fortuna (Generali Group) paying CHF 385 p.a. (260 for legal excl. traffic and 125 for traffic).

To me it seems that Switzerland is like the mother country of all insurances thinkable. In my home country I had only a full casco insurance policy for my car while over here I have, alongside the casco for my car, also health, life, legal protection (incl. traffic), travel and personal liability (the one required when renting) insurance policies (i.e. 6 policies in total) 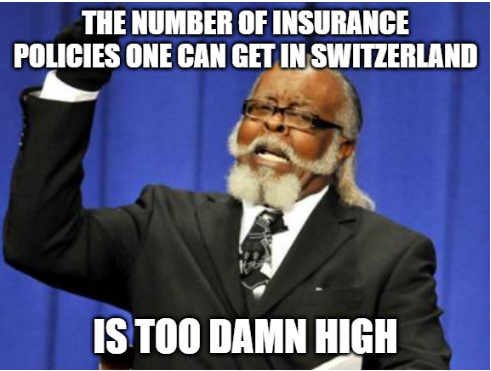 I have been debating for a long time on personal legal insurance. I just dont see the need for. When exactly do you guys expect to need it, e.g. what needs to happen?

I made it mainly for eventual disputes with employer or landlord…

For my case the personal legal insurance proved to be useful with a dispute with the renting company. They covered all the costs, of course if I count all the years I have been paying I must still be at a loss…

But like what are they going to do? (Insurance company) Write a fancy letter “from an attorney”? there has to be a limit of what they can do. You could probably to that yourself

If disputes with an employer land in front iof the “Arbeitsgericht” you as an employee will mostly always win. I guess maybe some legal fees are covered with insurance?

If you are afraid of disputes with landlord, make sure to rent from a Verwaltung where the property belongs to a pension fund or something. Not some shady individual person who lets say lives in the same building and haphazardly does the repairs himself… 3 months late

What kind of disputes are you guys having?

The legal protection insurance will basically cover all your lawyer costs (which could be substantial over here), should you need one in case of an insured event happening. Thankfully, so far I didn’t have to hire a lawyer, but I did call their hotline few times for legal counsel…

But is really all costs covered, or is it up to a certain amount. Say you are getting sued for 15Mil and they cover 10Mil. You are still screwed.

By the way the coverage is usually at best around 1million for cases in Switzerland/Europe. I noticed this can vary quite a lot, the cheapest insurances being around 300k.

But is really all costs covered, or is it up to a certain amount. Say you are getting sued for 15Mil and they cover 10Mil. You are still screwed.

You’re mixing things up. The amount for which you are sued (say CHF 100 thousand gazillions) is not insured under the legal protection policy. What the insurance company covers is the lawyer’s fee (and this is limited as per my policy to 1 mio CHF). That’s all. If you lose the legal case you still have to pay the amount for which you are being sued, but the lawyer’s fee is covered

I would just never ever get the Rechtsschutz at the same company where I have any other insurance policy.

I assume I would probably need it most to sue my Krankenkasse, Haftpflicht or whatever. In case it’s the same company, the Rechtsschutz is useless

I’ve never had a legal insurance nor ever had the need for one.
But I also know of people who get tangled up in disputes regularly. Oh the energy.
Employer, landlord, … I can walk away when I want.
That’s my protection. Less lost nerves than a drawn-out legal dispute.
The only time to require a good lawyer IMO is possibly during a divorce, and that’s usually not covered by these insurances.

Maybe if you buy/sell a lot on FB Marketplace?

Next to landlord/renting-related disputes, as I took it out next to car insurance, I assume that is another class of cases where it could get applied - traffic-related disputes.
For 250 chf/year, I concluded it didn’t make sense to make any fuss about it.

As always, YMMV - if one sees no personal life domains where it could get handy (e.g. bulletproof relationship with the landlords or even owning a home, no active participation in traffic etc.), I assume that lower risk could be not worth insuring for them.

I have the one from FRC : https://www.frc.ch/protection-juridique-frc-globale/
It is the one from the Consumer Federation which is a guarantee of good behaviour, I hope. It costs 230.- including the membership thus you get their magazine which I personally appreciate.

I used to have the one from Generali and used it. I was glad to have it when I had to deal with a dishonest company doing work at home.

I want to revive this topic as I’m thinking about getting one. Protekta from Mobiliar or Dextra.

Any final conclusions on this whole thing?

For my part I stayed with Protekta as their price/service seem to me fair. I was told that Dextra would be the “better” legal insurance in town but of course costs more…

Any final conclusions on this whole thing?

Some time ago I had a legal insurance from Protekta and later on one from AXA.

Never used the Protekta one but I paid several years of AXA premiums and would have needed them 2 times. In both cases the insurance was worthless.

In both cases they claimed that such cases are not covered by the insurance. In one case, as a matter of “courtesy” they paid 600 CHF for a lawyer which was barely enough for a 30min talk and for him to study the case. The lawyer said the case would be definitely a clear win in court but without insurance coverage it would cost me quite a bit in advance and it’s not guaranteed that I would get all the costs back even if I win and should the company go bankrupt in the meantime I would see no compensation at all, so it was quite a financial risk. He said he would love to take over the case and demolish them in court but sometimes we need also think economically.

In the second case they sent me a letter with their legal opinion which basically said nothing and left everything open so basically the same what I could get from internet research. Then I cancelled the insurance and will never make a new one again.

I just noticed that insurances in general cover in their ToS only things that are unlikely to happen and those things that are likely to happen they just exclude in the ToS. I had similar experiences with several other insurances such as travel insurance etc. so I’m a bit done with insurances, therefore I really now have only the minimum of what one needs and everything else I will pay by myself when it comes to it.

I was considering taking Smile.Home.
I had 1 issue with my landlord last year and could have covered the lawyer cost. Same for my company when they tried to impose 3 forced holidays. A colleague had Groupe Mutuel to send a letter to state the law and it was enough for them to drop the request.