I’d suggest you to check some smaller Provider rather than go to 3g/4g internet at home. There are cheap offers starting at 29 or even 24 if I remember correctly.

So I made the accounting for the whole year 2017 : 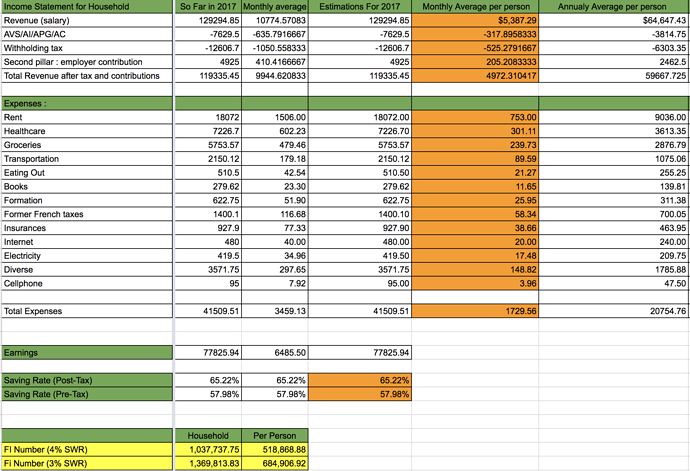 Lo and behold, the household spent 41’509 CHF this year, without counting taxes. This makes 20’754 CHF per person. Obviously, housing represents almost 50% of the spendings. Then, we have healthcare and groceries, around 15% each. The “Diverse” category takes up almost 10% of expenses, so I’ll have to make more categories this year to monitor what it entails!

This, plus a very good stock market year, means that our net worth is now 216’335 CHF as of the first of January!

Switching subjects, as some of you may have seen in another thread, I am currently working on a side project of a Stock Screener web application. Feel free to give some feedbacks if you have some

So, almost 6 months passed since my last update so i thought I would do a semi-annual debriefing

As usual, here is a list of the books I enjoyed reading. I really think that knowledge compounds like money. It does not show at first, but if i can go to bed each day a little less stupid, I’ll take that.

The Target is still to retire in 2025 with around 1’300’000 CHF for the household. But lately i am not so sure about what to do afterwards. The initial plan was to have a small farm in Poland, but I am losing the enthusiasm for farming. At some point I thought about staying in Switzerland or going back in Alsace (France) to be close to family but the high taxes in France require a much bigger stash. Another option we considered was to emulate the guys from Millenial Revolution and to go traveling non-stop for several years before settling down.

My invested portfolio returned 10% over the same period

Does this include dividends? If yes, what is your approximate Grenzsteuersatz?
I saw your post in the portfolio thread about the stocks you picked but I think it’s a value strategy and taxation should not be neglected.

As you said i use principally a value strategy (= finding undervalued stocks) and thus most of my gains come from capital gains. Statistically, dividends constitute only 6% of my portfolio returns: for instance if my portfolio returned 100k CHF, then only 6k CHF were dividends.

So It is even less impacted by taxation than indexing for instance.

You are right, I should calculate my Grenzsteuersatz and take it into consideration, but I think it is gonna be impacted in a very minor way by my returns.

I became a dad in March

Congratulations!
It will be interesting if you track the difference in costs for having a child.

Also, who are the Milleinal Revolution’s people?

Also, who are the Milleinal Revolution’s people?

It will be interesting if you track the difference in costs for having a child.

Sure, so far it is not really expensive

Plus, the canton gives us 200 CHF per month for the baby. So far it balances out quite nicely!

It’s even more impressive if you compare it to YTD of VT: -0.12%. The real test of performance though requires at least a decade IMHO. Shorter than that I still won’t put my faith in your net nets.

PS. As always I love your books recommendations. Thanks a lot. I already read Taleb and Kahneman, but not the others (especially LKY book seems interesting - I’m generally interested in microstates, like Singapore or Hong Kong). I need to open my own journal thread and publish my numbers and books that I’ve read. Compounding of reading is even more powerful than compounding of the interest - it’s a really good investment!

9 posts were split to a new topic: What about Childcare?

Oh yes the LKY book is great! In particular, one key aspect for me was the culture difference between west and east. In the western world we have broadly three distinct socio-economic ways of thinking : socialists, conservatives and libertarians. In the East, one of the main school of thoughts is confucianism (where the primary focus is the wellbeing of your family and society), and it is interesting to see how LKY picked several items from each school of thought to unite them in a society that works.
One other key take-away is when he states that democracy is not the cause of progress but its result; and that, in order for democracy to work in a society, you first need a cohesive society and a prosperous middle-class (as an illustration of this, see for instance the various recent failures each time western countries tried to impose “democracy” in other countries…)

17 posts were split to a new topic: About Democracy and rights

For those interested in Value Investing, I cannot recommend enough the work of Sanjay Bakshi, a professor - and practitioner - vastly influenced by Charlie Munger and Buffett:

I noticed a lot of people talked about their Investment policy statement lately. Since my investment style tend to differ a lot from other members, I thought it would be a good exercise to layout my investment philosophy. of course, it may be amended with future experiences.

I decided to apply the idea of compound interest with utmost seriousness.
My goal as an investor is to compound my wealth at the highest rate possible. A compounding machine has three components:

I will continuously save between 65% and 70% of the money I am earning through my job, until I become financially independent (saved up 30 times annual expenses), which I expect to happen in approximately 7 years (give or take 2 years depending on market conditions). After which I may stop working (or at least stop exchanging my time against money when considering an occupation).

This one is easy: Being currently 32 years old, I expect to let my compounding machine run at least 30 or 40 years, hopefully much more depending on my health.
A nice tool when we have a long term horizon is the rule of 72, which gives you the amount of time needed to double your money by compounding.

It is all about the number of doubles occurring in your time horizon. With a 10 years horizon, there won’t be that many doubles, even compounding at 26% (there would be only 3.33 doublings in this case).
But with a 30 years runway, the number of doublings can be huge! Between 3 and 10 doublings using above rates (and 2^10 is a very sweet number where your money has been multiplied by 1’000…)

This is the part where I actually invest the money.

So far, I have classified these occasions in five categories:

This one is easier. I will sell when:

Thanks to @1000000CHF I have finally read James Clear’s book Atomic Habits. It is fantastic!
The book provides a comprehensive set of rules and advices that help us changing our behavior and instill new habits/break bad habits.

I had read before The Power of Habits by Charles Duhigg, but had found it impractical although interesting from a theoretical point of view. Here it is the opposite: think practical and implement

I’ve been reading this forum for a few months now and also the jurnal section. A lot of great information and advice, I learned a lot from the posts here.

I’m trying to run a salary calculator simulation on https://www.lohncomputer.ch/en/your-result/
However, if I input 10774 chf per month for a married couple with no children, not church members living in Zurich they estimate net income 8285, that’s a far cry from 9944 I see on your table even if I add the employers P2 contribution.
Can you shed some light on how you reached those numbers, please?
If we earn say 130k between myself and my wife on a B permit, how much would that be Net, assuming we will live somewhere in the canton of Zurich most likely close to the German border.
We are planning to relocate there from Dublin and I am trying to compare overall cost of living & purchase power.
Thank you,

A lot more than in Dublin in any case.

Only US beats Switzerland in compensation

Yes you got me on this one: in our situation in 2017 I earned most of our income (around 120k gross) while my wife did various small jobs and tasks (at some point she had up to 3 employers) for around 500 - 1000 CHF / month. So although I may have correctly recorded all the AVS/First pillar and witholding tax for my salary, in the case of my wife her salary usually arrived waaaay before the many payslips; So in her case I may not have recorded all the social contributions. But the Net income is accurate in any case. The above exercice’s purpose was more to track our daily expenses after net salary.

Anyway, if you want to have a more precise idea of how much you will take home in your pocket, I advise you to follow the simulator, the picture may be more accurate than our special situation

So for example, in your calculation, did you include the Pension fund as Income? 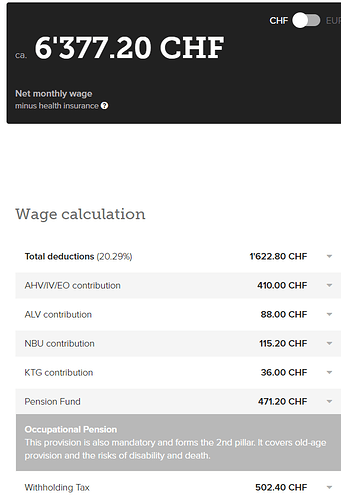 Also, any idea about that withholding TAX.
Can that be avoided or diminished P3a maybe ?
Thank you,

For the second pillar, it will depend of the pension fund provider chosen by your employer, but yes assuming that 50% is paid by you and 50% by your employer is a safe assumption.
For the withholding tax, this is not avoidable as long as you haven’t lived in CH more than 5 years. You can however invest in a 3a pillar (max ~6500 CHF per year) and deduct it from your taxable income. Then at the end of the year you claim a tax refund (except around 1000 CHF tax savings).