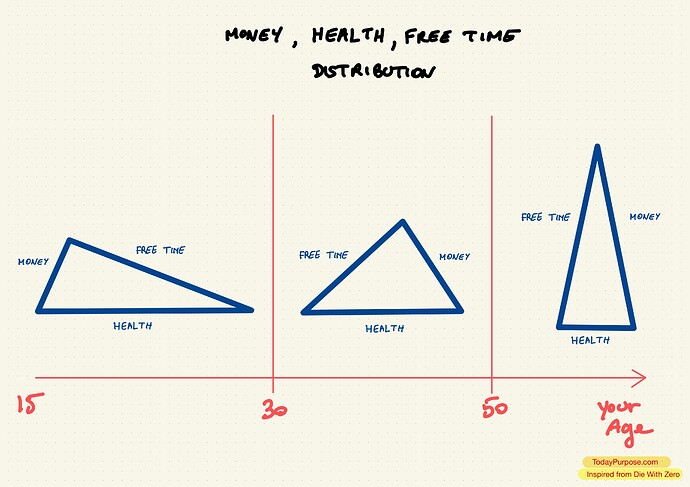 On Time, Money and Health

What would you do of your $1+ million dollar sitting in your bank account or index funds in your dying bed?

Thanks for the nice read. What I really dislike about this, is the part about eating healthy, he states fruits are bad, but has absolutely no evidence for this, the link he added there is just some history about how humans domesticated fruits. I also hate this ongoing diet trend about skipping one meal a day, only eat between hour x and y blabla.

I’m a fan of the concept that the crucial optimizing criterion should be life enjoyment and not wealth, so this hits somewhat home.

I feel like they separate “work time” and “free time” and fail to make a case for jobs with a lesser salary but a more balanced use of time and more enjoyment doing them. Our health declines and we (well, I) become miserable working jobs with horrible hours/workload thinking “hey, I need the money!”

I’m sure building a good life balance early on is key to living a fulfilling life.

I wouldn’t agree with that. What you eat is very important. People are different and food is like religion you can debate for hours, but I would feel comfortable to say that most people could reduce candies, chips and soda drinks a bit. Being aware that the white roll you eat for breakfast and enhance with a chocolate bar and wash down with some orange juice for health is actually just 3x pure sugar can’t hurt. In fact, it is quite horrid imho how much stores try to market terrible but tasty foods as healty.

but I would feel comfortable to say that most people could reduce candies, chips and soda drinks a bit.

100% agree with this and I have no problem with the statement about reducing sugar, however saying fruits are “bad”, this is just bull***. Of course you shouldn’t eat 1kg of fruits a day, as always the dosage matters.

obvious. But it also matter when and how frequently you consume. Same calories and excercise level is not same weight gain/loss. If your body has to process food/sugar all the time energy goes into that instead of getting rid of the nutrition your body does not require.

You forgot to add the first line:
Assuming a human being to be a perfect sphere…

No, this formula is totally valid, even if you are not a perfect sphere. Different people burn/“release” calories differently based on lots of factors, but at the end of the day how much you gain/lose in weight is dependent on the difference between calories in and out.

Anyway, I hope all of you got that this was more of a sarcastic comment

I’m sure building a good life balance early on is key to living a fulfilling life.

Indeed. And it’s fascinating that humanity has been having these thoughts for at least thousands of years. For example, Aristotle would agree, and so would Epicurus, in saying that a happy life is not a life spent in misery, waiting for the day when finally everything is going to be perfect. The (admittedly difficult) trick is in finding the right balance: Be happy now, but save something to increase the odds that you’ll be happy later, too. And Cicero wrote in De senectute that “one has to learn how the be old when young”, as it’s way more difficult to do so when one finally and suddenly realizes that old age has actually arrived.

It takes some candid introspection to figure out these things, and it’s not an easy thing to do. I know people who desperately hang on to bad jobs and bad companies, for various different reasons that all make little sense to me. Others hold back on things they’d love to do and “save them for later”. So they just soldier on, not listening to themselves. I knew a guy who had bought an old car just like his dad had when he was a kid, and kept it in a barn, planning to get it back on the streets when he retired. He died before reaching retirement. What a tragedy.

Maybe it’s also a cultural thing? For centuries, people here in the West have been told that they only need to endure this life to find celestial bliss in Heaven.